How big are the biggest monster stars?

How big can stars get? And how do these monster stars get so big? 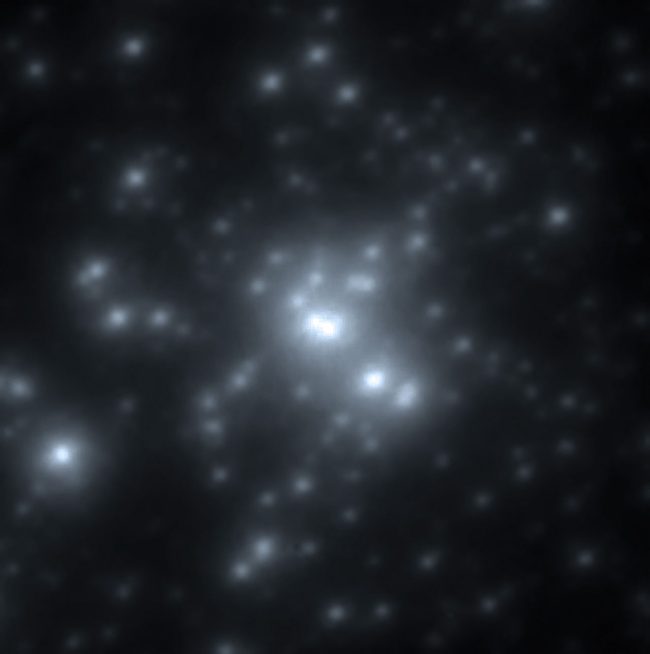 Near-infrared image of the R136 cluster, from ESO’s Very Large Telescope. The most massive known star, labeled R136a1, is located at the center of the image. Image via ESO/ P. Crowther/ C.J. Evans.

When speaking of bigness among stars, you have to define your terms. There are very heavy stars. And there are gigantic stars, in terms of sheer physical size. The heaviest star is thought to be R136a1. It’s 265 times more massive than our sun – nearly twice as massive as what astronomers thought was possible. It’s the most massive star known at this time. But there are more ways than one to measure stars’ bigness. In terms of sheer physical size, the star UY Scuti is considered the biggest known. It’s only 30 times the sun’s mass, but has a radius more than 1,700 greater than the sun. Follow the links below to learn more about these monster stars.

UY Scuti is just plain big, with a radius 1,700 times that of our sun 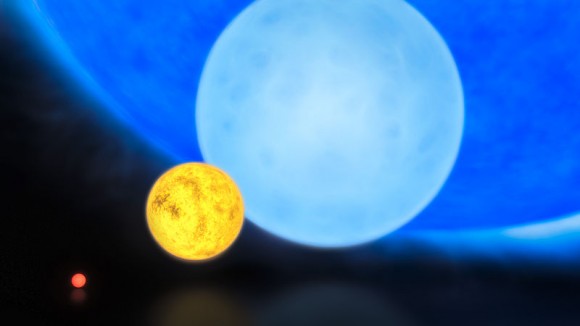 Left to right: a red dwarf, the Sun, a blue dwarf, and R136a1. R136a1 is not the largest known star in terms of radius or volume, only in mass and luminosity. Image via Wikipedia.

R136a1 is the heaviest star, with 265 times the sun’s mass. Located in the Large Magellanic Cloud – some 160,000 light-years away – R136a1 is what’s known as a Wolf–Rayet star. Its surface temperature is over 100,000 degrees F. It’s also the most luminous star known at more than 7 million times the luminosity of our sun.

For decades, theories have suggested that no stars can be born by ordinary processes above 150 solar masses. So how did R136a1 and stars like it grow so large? And why aren’t monster stars scattered throughout space?

One idea is that supermassive stars like R136a1 form through mergers of multiple stars. In 2012, astronomers at the University of Bonn suggested the the ultramassive stars in the Large Magellanic Cloud – such as R136a1 – were created lighter stars in tight double-star systems merged.

But if these ultramassive stars form in this way, why don’t we see more of them? After all, multiple star systems are common throughout space, while monster stars are few and far between.

The answer may be that monster stars don’t live very long. They evolve very quickly in contrast to less massive stars like our sun. They end their lives in violent supernova explosions. 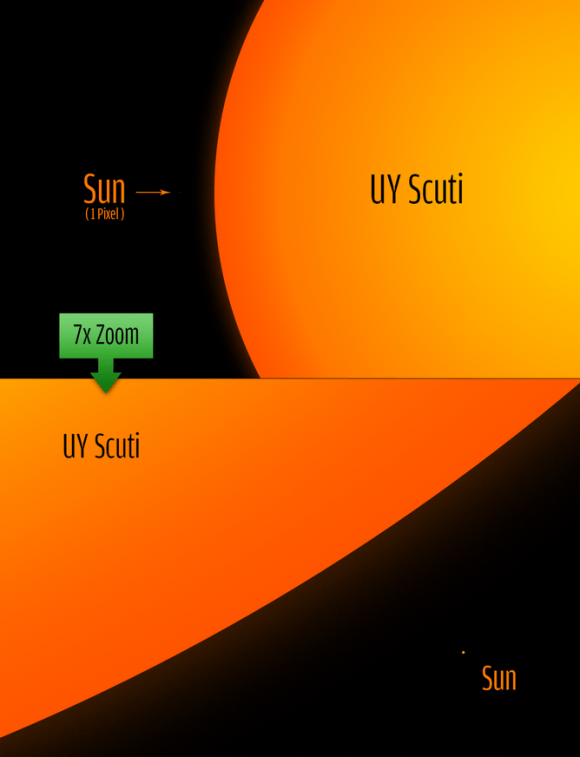 UY Scuti is just plain big, with a radius 1,700 times that of our sun. Located some 9,500 light-years away, this star is the leading candidate for being the largest known star. Astrophysicist Jillian Scudder of University of Sussex posted has said of this star:

UY Scuti is thought to have a mass only slightly more than 30 times the mass of our sun. But its radius is thought to be something like 1,700 times greater than the radius of the sun. That would make this star is nearly eight astronomical units across – that’s eight times the distance between the Earth and sun. In other words, this single star is so large that its outer surface would extend far beyond the orbit of the planet Jupiter (which lies about five times farther from the sun than Earth). Scudder said:

This star is one of a class of stars that varies in brightness because it varies in size, so this number is also likely to change over time. The margin of error on this measurement is about 192 solar radii. This uncertainty is why I used ‘possibly one of the largest stars’ in my description of UY Scuti. If it is smaller by 192 solar radii, there are a few other candidates that would beat UY Scuti.

Who are those other candidates? They would include NML Cygni, whose estimated distance is about 5,300 light-years way and whose radius is thought to be 1,650 times greater than that of our sun. A recent study of this star suggested that it’s an unusual hypergiant star cocooned within a nebula and severely obscured by dust. Thus we don’t know its size exactly, and the true range might between 1,642 to 2,775 solar radii. The upper part of the range would make it larger than UY Scuti.

Another hypergiant star is WOH G64, also in the Large Magellanic Cloud, and thus located at a distance of some 168,000 light years from Earth. At an estimated 1,540 times the sun’s radius, this star is thought to be the largest star in the Large Magellanic Cloud, in terms of sheer physical size. And, again, we’re talking size here, not mass. This star is thought to have only 25 times the sun’s mass.

So you can see that there are extremely heavy stars … and then there are simply gigantic stars. What makes a star big might be its mass (like R136a1) or its physical size (like UY Scuti and the two other stars mentioned here). Either way, it’s fun to imagine what it would be like to have one of these stars relatively close to us in space … say, the distance to the nearest star system, Alpha Centauri, only four light-years away.

At that distance, any of these stars would blaze in our night sky!

Bottom line: The most massive star known is R136a1, in the Large Magellanic Cloud. It’s thought to be about 265 times more massive than our sun. Stars are also considered big if their sheer physical size is big. In terms of sheer size, UY Scuti is the biggest known star.