Immortalize your favorite artist, composer, or writer! The competition to name five impact craters on Mercury closes on Thursday. 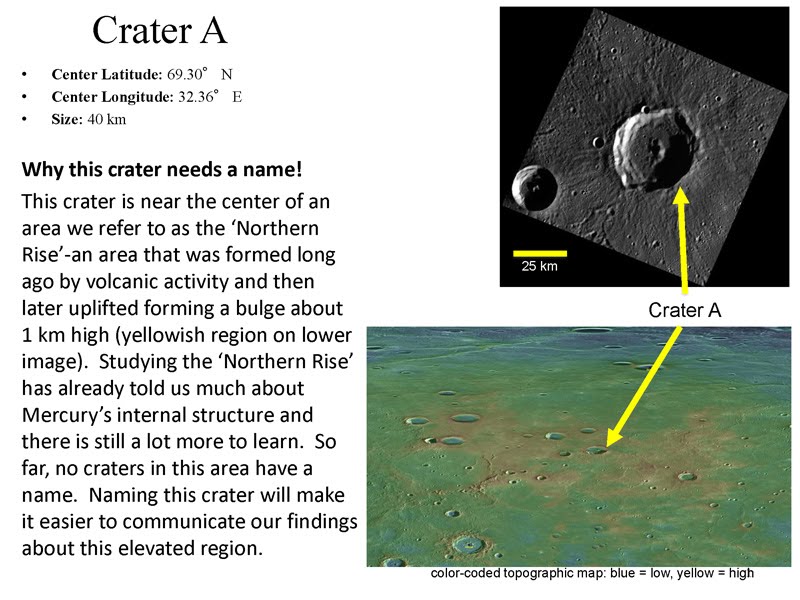 NASA’s MESSENGER spacecraft has been orbiting Mercury since March 2011. It’s the first spacecraft ever to orbit this innermost planet in our solar system. On December 15, 2014, MESSENGER’s public outreach team launched a competition inviting the public to name five impact craters on Mercury. The contest runs until Thursday (January 15, 2015.) Fifteen finalist names for craters will be submitted to the International Astronomical Union (IAU) for selection of the five winners. Winning submissions will be announced by the IAU to coincide with the end of MESSENGER’s mission.

Read more about how to enter the contest here.

Despite frequent boosts to higher orbit over the past months, the spacecraft is expected to run out fuel and crash into Mercury in late March or April 2015.

The contest allows the public to immortalize an important person in the arts and humanities from anywhere in the world. According to the IAU — self-appointed governing body of planetary and satellite nomenclature since 1919 – all new craters on Mercury must be named after an artist, composer, or writer who was famous for more than 50 years and has been dead for more than three years. See the current list of named Mercury craters. 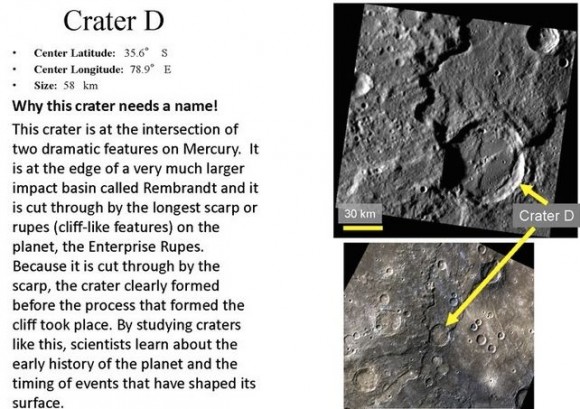 Here is one of the 5 craters on Mercury that needs a name. Click here to see all 5, and learn their stories.

The original goal of MESSENGER was to take 2,500 images of the planet, but is has returned more than 250,000 images. Julie Edmonds leads the MESSENGER Education and Public Outreach (EPO) Team. She said:

We now have a detailed, high-resolution map of the entire planet,” Edmonds noted. As scientists study the incredible data returned by MESSENGER, it becomes important to give names to surface features that are of special scientific interest. Having names for landforms such as mountains, craters, and cliffs makes it easier for scientists and others to communicate. 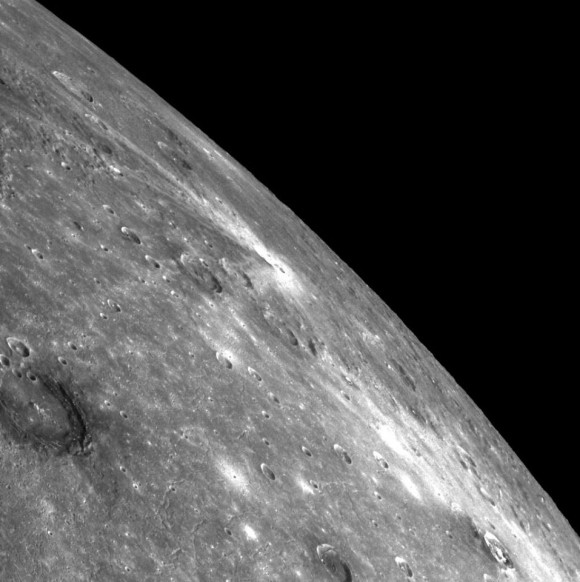 A limb view showing the northern part of the 1,640 kilometer- / 1,018-mile-wide Caloris Basin within the Raditladi Quadrangle in the northern hemisphere on Mercury. MESSENGER acquired this image on October 18, 2014. Read more about this image from Andrew R. Brown. Image via NASA / JHU / APL MESSENGER spacecraft.

Bottom line: The outreach team of NASA’s MESSENGER spacecraft has organized a competition to name five impact craters on Mercury. Submit your ideas December 15, 2014, to January 15, 2015. Finalists go to the IAU for selection of the five winners. Click here for more information about how to enter.