LIGO and Virgo find a mystery object in the ‘mass gap’

The science world is buzzing about a new discovery made via the LIGO-Virgo collaboration. It’s a new object found in the so-called “mass gap” between neutron stars and black holes. 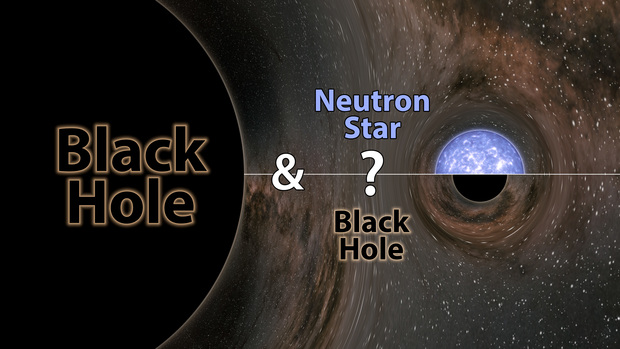 In August of 2019, the LIGO-Virgo gravitational-wave network witnessed the merger of a black hole with 23 times the mass of our sun and a mystery object 2.6 times the mass of the sun. Scientists do not know if the mystery object was a neutron star or black hole, but either way it set a record as being either the heaviest-known neutron star … or the lightest-known black hole. Image via LIGO/ Caltech/ MIT/ R. Hurt (IPAC).

When the most massive stars die, they collapse under their own gravity and leave behind black holes; when stars that are a bit less massive die, they explode in supernovas and leave behind dense, dead remnants of stars called neutron stars. For decades, astronomers have been puzzled by a gap that lies between neutron stars and black holes: the heaviest known neutron star is no more than 2.5 times the mass of our sun, or 2.5 solar masses, and the lightest known black hole is about 5 solar masses. The question remained: does anything lie in this so-called mass gap?

Now, in a new study from the National Science Foundation’s Laser Interferometer Gravitational-Wave Observatory (LIGO) and the Virgo detector in Europe, scientists have announced the discovery of an object of 2.6 solar masses, placing it firmly in the mass gap. The object was found on August 14, 2019, as it merged with a black hole of 23 solar masses, generating a splash of gravitational waves detected back on Earth by LIGO and Virgo. A paper about the detection was published on June 23, 2020, in The Astrophysical Journal Letters.

We’ve been waiting decades to solve this mystery. We don’t know if this object is the heaviest known neutron star, or the lightest known black hole, but either way it breaks a record.

Co-author Patrick Brady, a professor at the University of Wisconsin, Milwaukee, and the LIGO Scientific Collaboration spokesperson, said:

This is going to change how scientists talk about neutron stars and black holes. The mass gap may in fact not exist at all but may have been due to limitations in observational capabilities. Time and more observations will tell.

Is it a neutron star? Is it a black hole? What is the mysterious 2.6 solar mass object which created #GW190814??? #MassGaphttps://t.co/tkMSwVfyIq

The cosmic merger described in the study, an event dubbed GW190814, resulted in a final black hole about 25 times the mass of the sun (some of the merged mass was converted to a blast of energy in the form of gravitational waves). The newly formed black hole lies about 800 million light-years away from Earth.

Before the two objects merged, their masses differed by a factor of 9, making this the most extreme mass ratio known for a gravitational-wave event. Another recently reported LIGO-Virgo event, called GW190412, occurred between two black holes with a mass ratio of about 4:1. Kalogera explained:

It’s a challenge for current theoretical models to form merging pairs of compact objects with such a large mass ratio in which the low-mass partner resides in the mass gap. This discovery implies these events occur much more often than we predicted, making this a really intriguing low-mass object.

The mystery object may be a neutron star merging with a black hole, an exciting possibility expected theoretically but not yet confirmed observationally. However, at 2.6 times the mass of our sun, it exceeds modern predictions for the maximum mass of neutron stars, and may instead be the lightest black hole ever detected. 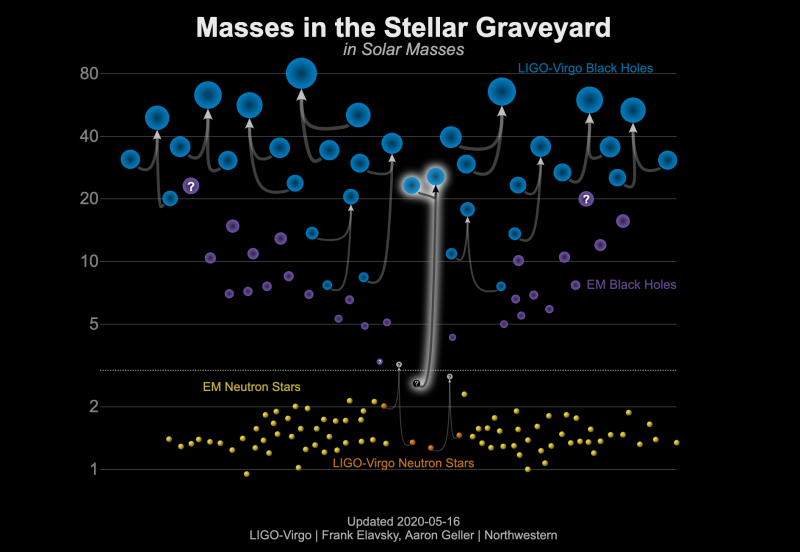 When the LIGO and Virgo scientists spotted this merger, they immediately sent out an alert to the astronomical community. Dozens of ground- and space-based telescopes followed up in search of light waves generated in the event, but none picked up any signals. So far, such light counterparts to gravitational-wave signals have been seen only once, in an event called GW170817. That event, discovered by the LIGO-Virgo network in August 2017, involved a fiery collision between two neutron stars that was subsequently witnessed by dozens of telescopes on Earth and in space. Neutron star collisions are messy affairs with matter flung outward in all directions and are thus expected to shine with light. Conversely, black hole mergers, in most circumstances, are thought not to produce light.

According to the LIGO and Virgo scientists, the August 2019 event was not seen by light-based telescopes for a few possible reasons. First, this event was six times farther away than the merger observed in 2017, making it harder to pick up any light signals. Secondly, if the collision involved two black holes, it likely would have not shone with any light. Thirdly, if the object was in fact a neutron star, its 9-fold more massive black-hole partner might have swallowed it whole; a neutron star consumed whole by a black hole would not give off any light. Kalogera commented:

I think of Pac-Man eating a little dot. When the masses are highly asymmetric, the smaller neutron star can be eaten in one bite. 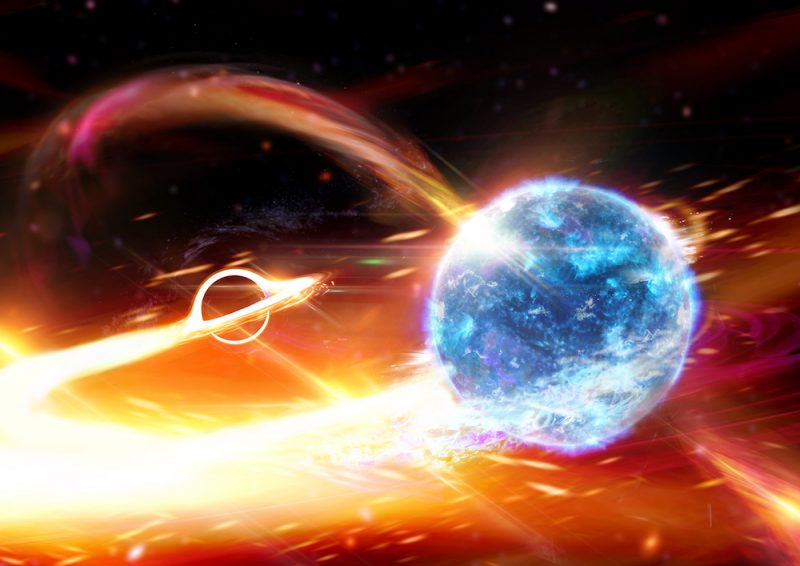 Artist’s concept of a black hole/neutron star binary system. It shows a neutron star (foreground) orbiting a larger black hole (background). The black hole is more distant and appears smaller from this perspective, and shows the effects of gravitational lensing of material accreted from the neutron star. It is not known if the companion of the black hole in GW190814 is a neutron star or a low-mass black hole. Image via Carl Knox (OzGrav)/ LIGO-Virgo.

How will researchers ever know if the mystery object was a neutron star or a black hole? Future observations with LIGO, Virgo and possibly other telescopes may catch similar events that would help reveal whether additional objects exist in the mass gap. Charlie Hoy, a member of the LIGO Scientific Collaboration and a graduate student at Cardiff University, said:

This is the first glimpse of what could be a whole new population of compact binary objects. What is really exciting is that this is just the start. As the detectors get more and more sensitive, we will observe even more of these signals, and we will be able to pinpoint the populations of neutron stars and black holes in the universe.

The mass gap has been an interesting puzzle for decades, and now we’ve detected an object that fits just inside it. That cannot be explained without defying our understanding of extremely dense matter or what we know about the evolution of stars. This observation is yet another example of the transformative potential of the field of gravitational-wave astronomy, which brings novel insights with every new detection.

How @BBCScienceNews is reporting our @LIGO @ego_virgo#GW190814 discovery: is our mystery object a #NeutronStar or a #BlackHole ? Could it be a 'Black Neutron Star' ?… ("not really" is the answer – but it's a catchy name!…) #MassGaphttps://t.co/jXfAWgR1XP pic.twitter.com/BDX0dEMNnb

Bottom line: The science world is buzzing about a new discovery made via the LIGO-Virgo collaboration. It’s a new object found in the so-called “mass gap” between neutron stars and black holes.

Source: GW190814: Gravitational Waves from the Coalescence of a 23 Solar Mass Black Hole with a 2.6 Solar Mass Compact Object