Last year, in its Grand Finale, the Cassini spacecraft dove repeatedly between Saturn and its rings. This week, 6 teams of researchers published new research based on Cassini’s final days and those daredevil dives.

Artist’s concept of NASA’s Cassini spacecraft in orbit around Saturn. Image via NASA/JPL-Caltech.

NASA’s Cassini mission made its final approach to Saturn and dove into the planet’s atmosphere on a little more than a year ago. This week (October 5, 2018), six teams of researchers published their work in the peer-reviewed journal Geophysical Research Letters, based on findings from Cassini’s Grand Finale.

That’s when, as the spacecraft was running out of fuel, the mission team steered Cassini spectacularly close to Saturn in 22 orbits before deliberately vaporizing it in a final plunge into the atmosphere in September 2017.

Knowing Cassini’s days were numbered, its mission team flew the spacecraft where it was never designed to fly. For the first time, Cassini probed Saturn’s magnetized environment, flew through icy, rocky ring particles and sniffed the atmosphere in the 1,200-mile-wide (2,000-km-wide) gap between the rings and the cloud tops. Not only did the flight path push the spacecraft to its limits, the new findings illustrate how powerful and agile the instruments were.

Many more Grand Finale science results are to come, but some of the October 5 highlights – and links to the papers – are below. 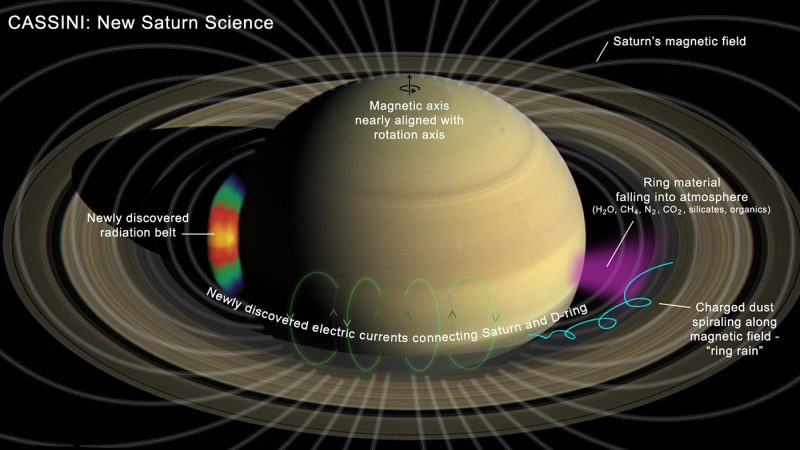 – Complex organic compounds embedded in water nanograins rain down from Saturn’s rings into its upper atmosphere. Scientists saw water and silicates, but they were surprised to see also methane, ammonia, carbon monoxide, nitrogen and carbon dioxide. The composition of the organics is different from that found on moon Enceladus – and also different from that on moon Titan, meaning there are at least three distinct reservoirs of organic molecules in the Saturn system.

– For the first time, Cassini saw up close how rings interact with the planet and observed inner-ring particles and gases falling directly into the atmosphere. Some particles take on electric charges and spiral along magnetic-field lines, falling into Saturn at higher latitudes – a phenomenon known as “ring rain.” But scientists were surprised to see that others are dragged quickly into Saturn at the equator. And it’s all falling out of the rings faster than scientists thought – as much as 22,000 pounds (10,000 kilograms) of material per second.

– Scientists were surprised to see what the material looks like in the gap between the rings and Saturn’s atmosphere. They knew that the particles throughout the rings ranged from large to small. But the sampling in the gap showed mostly tiny, nanometer-sized particles, like smoke, suggesting that some yet-unknown process is grinding up particles.

– Saturn and its rings are even more interconnected than scientists thought. Cassini revealed a previously unknown electric-current system that connects the rings to the top of Saturn’s atmosphere.

Artist’s concept of NASA’s Cassini spacecraft diving between Saturn and its innermost rings, as part of the mission’s Grand Finale. Image via NASA/JPL-Caltech.

– Scientists discovered a new radiation belt around Saturn, close to the planet and composed of energetic particles. They found that while the belt actually intersects with the innermost ring, the ring is so tenuous that it doesn’t block the belt from forming.

– Cassini flew above Saturn’s magnetic poles, directly sampling regions where radio emissions are generated. The findings more than doubled the number of direct measurements of radio sources from the planet, one of the few non-terrestrial locations where scientists have been able to study a radio-generation mechanism that is believed to operate throughout the universe.

For the Cassini mission, the science rolling out from Grand Finale orbits more than justified the calculated risk of diving into the gap – skimming the upper atmosphere and skirting the edge of the inner rings, said Cassini Project Scientist Linda Spilker. She said:

Almost everything going on in that region turned out to be a surprise. That was the importance of going there, to explore a place we’d never been before. And the expedition really paid off – the data is tremendously exciting.

Analysis of Cassini data from the spacecraft’s instruments will be ongoing for years to come, helping to paint a clearer picture of Saturn. Spilker said:

Many mysteries remain, as we put together pieces of the puzzle. Results from Cassini’s final orbits turned out to be more interesting than we could have imagined. 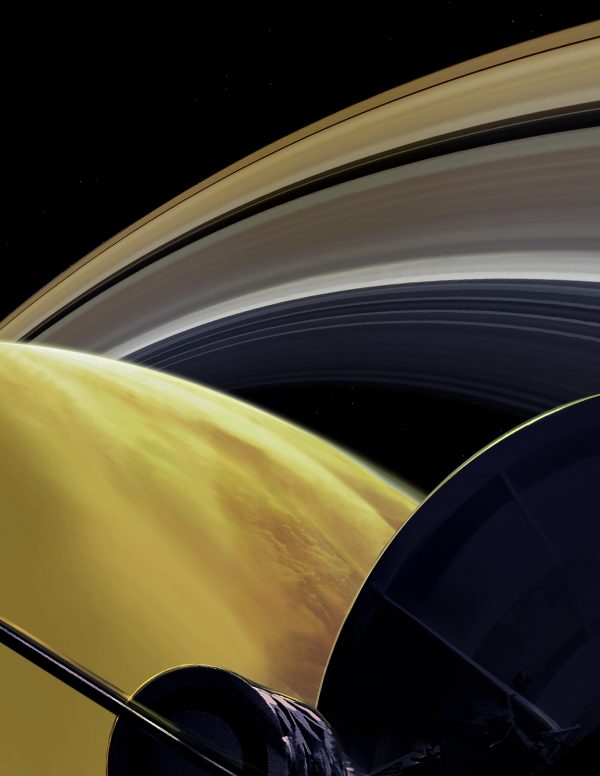 This illustration imagines the view from NASA’s Cassini spacecraft during one of its final dives between Saturn and its innermost rings, as part of the mission’s Grand Finale. image via NASA/JPL Caltech.

Chemical interactions between Saturn’s atmosphere and its rings

Bottom line: On October 5, 2018, the journal Geophysical Research Letters published a compilation of science from the Cassini spacecraft’s last ultra-close orbits of Saturn.