Globular clusters not as old as thought?

New research suggests that globular clusters – once thought to be nearly as old as the universe itself – aren’t that old, after all. They might be only around 9 billion years old.

M13, aka the Great Cluster in Hercules. This object is a globular star cluster, perhaps the most famous one for Northern Hemisphere stargazers. Photo via Bareket Observatory in Israel, via CelestronImages.

Globular clusters – which are round, symmetrical clusters containing hundreds of thousands to millions of stars – were thought to be around 13 billion years old, nearly as old as the universe itself. The idea has been that the globular clusters formed early in the history of our galaxy, the Milky Way, and other galaxies, before these galaxies had a chance to flatten out into disks. Thus today we find the globular clusters scattered all around our galaxy’s center. New research from the University of Warwick – announced on June 4, 2018 – might affect that established view. The new work suggests that globular clusters aren’t as ancient as previously thought. They might be only around 9 billion years old.

The revised age estimate for globular clusters follows research into the age of binary star systems within the clusters. The new work has been accepted for publication in the peer-reviewed journal Monthly Notices of the Royal Astronomical Society.

Elizabeth Stanway of the University of Warwick led the research. A statement from her university said:

The discovery brings into question current theories on how galaxies, including the Milky Way, were formed – with between 150-180 clusters thought to exist in the Milky Way alone – as globular clusters had previously been thought to be almost as old as the universe itself.

These scientists were working with a computer model, called the new Binary Population and Spectral Synthesis (BPASS). It take the details of binary star evolution within the globular cluster into account, combining those theoretical ideas with actual observations of stars in globular star clusters. The statement said:

The evolutionary process sees two stars interacting in a binary system, where one star expands into a giant while the gravitational force of the smaller star strips away the atmosphere, comprising hydrogen and helium among other elements, of the giant. These stars are thought to be formed at the same time as the globular cluster itself.

Through using the BPASS models and calculating the age of the binary star systems the researchers were able to demonstrate that the globular cluster of which they are part was not as ancient as other models had suggested. 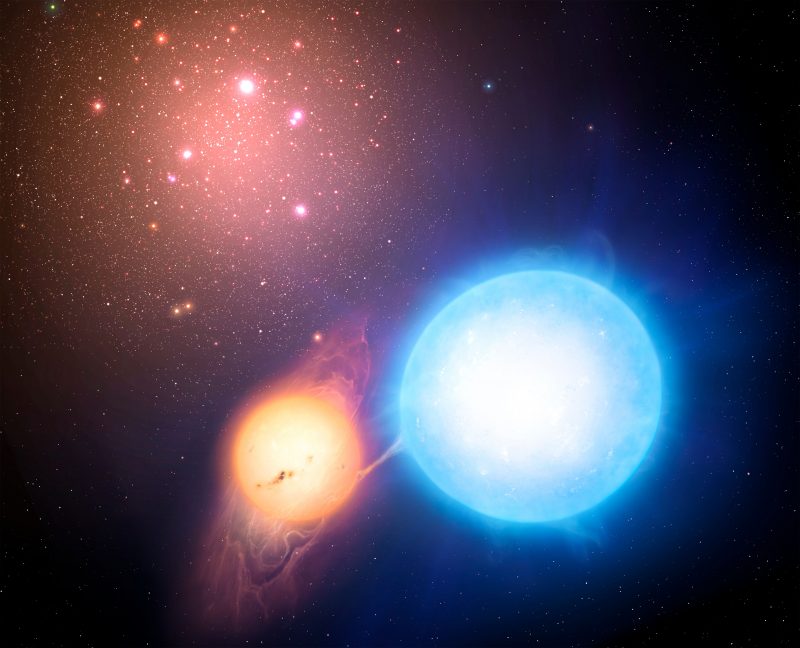 Artist’s concept of 2 gravitationally bound stars evolving within a globular cluster. These scientists used the ages of binary systems like this one to obtain a new estimate for the ages of the globulars. Image via Mark A. Garlick/University of Warwick.

Elizabeth Stanway said that the research’s findings point to new avenues of inquiry into how massive galaxies, and the stars contained within, are formed:

It’s important to note that there is still a lot of work to do – in particular looking at those very nearby systems where we can resolve individual stars rather than just considering the integrated light of a cluster – but this is an interesting and intriguing result.

If true, it changes our picture of the early stages of galaxy evolution and where the stars that have ended up in today’s massive galaxies, such as the Milky Way, may have formed. We aim to follow up this research in future, exploring both improvements in modeling and the observable predictions which arise from them.

Bottom line: Elizabeth Stanway at the University of Warwick led a study of multiple star systems within globular star clusters, resulting in a new age estimate for the globulars. Once thought to be as ancient as the universe itself, the globulars may be younger, perhaps only 9 billion years old, or 4 billion years younger than previously thought.