An X1.4-class solar flare erupted from giant sunspot group 1520 today (July 12, 2012). The blast began at 16:11 UTC, with the X ray flux peaking at at 16:53 UTC (11:53 CDT), at a time when the sunspot was directly facing Earth. Space weather forecasters say the effects from the coronal mass ejection (CME) created in the event will arrive July 14. It might mean we will see auroras – also called the northern lights – at lower latitudes than usual.

The huge sunspot grouping that produced the flare is as wide across as 10 planet Earths. It emerged in the past week over the sun’s southeastern edge. Tony Phillips, who masterfully pens the website spaceweather.com, said earlier today that AR1520 had been relatively quiet for 48 hours, calling it the calm before the storm. He was right!

Space scientists had been expecting this giant sunspot grouping – called AR1520 – to produce an X-flare. On July 12 at 16:53 UTC, it did. Image Credit: NASA/SDO/AIA

Another shot of the X-flare from giant sunspot group 1520. A coronal mass ejection (CME) was associated with this strong flare whose effects should arrive in Earth’s vicinity July 14. Experts are saying there might be auroras – northern lights – seen at lower latitudes than usual.

We’ve had a number of great photos from EarthSky Facebook friends of this giant sunspot grouping. VegaStar Carpentier caught this beautiful photo of 1520 at sunset on July 7, in Paris. Read more about this photo on VegaStar’s Flickr page.

Sunspot group 1520, visible on the sun’s surface at about 9 or 10 o’clock in this photo, as seen by EarthSky Facebook friend VegaStar Carpentier in Paris at sunset on July 7, 2012. With a safe solar filter, you can see this sunspot group with the eye alone. Do not look without a filter!

Here’s another one, taken three days later. This one is from Jv Noriega in the Philippines. 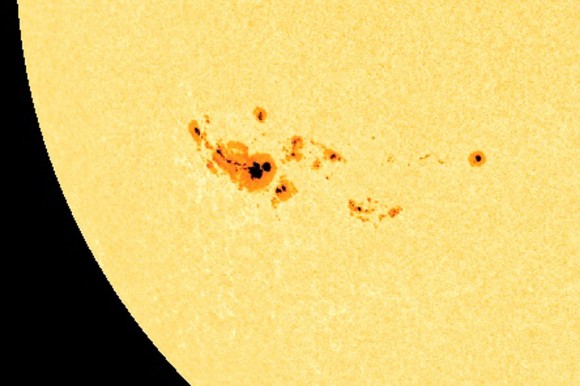 When an X-flare occurs, it may send high energy solar particles toward Earth, which cause the geomagnetic field surrounding our planet to become unsettled. What does an active geomagnetic field mean for us on Earth’s surface? Before the days of our electronic technology, not much. Today, though, satellites in orbit can undergo damaging effects. Telecommunications on Earth can be affected. Our human bodies are protected by Earth’s atmosphere; we’ve evolved for millions of years under the influence of X-flares on the sun and their effects.

Bottom line: AR1520 emerged in the past week over the sun’s southeastern edge. On July 12, 2012, it emitted an X-flare which peaked in intensity at 16:53 UTC (11:53 CDT). A coronal mass ejection or CME was associated with this strong flare whose effects will arrive in Earth’s vicinity on July 14. Experts say we might see auroras at lower latitudes than usual.