Gases left by Perseid meteors a boon to these astronomers

Enjoy this year’s Perseid meteor shower which peaks on the night of August 11-12; astronomers say they will, too!

The annual Perseid meteor shower is now rising to its peak on the mornings of August 12 and 13, 2013. Many people are already reporting plentiful shooting stars, seen in skies around the world. Meanwhile, astronomers at Gemini Observatory say they are utilizing a form of “pollution” from the Perseid meteor shower to aid in a cutting-edge astronomical technology known as Adaptive Optics (AO). They aren’t studying the meteors themselves. Instead, they’re using gases left behind by the meteors as they burn up high in the Earth’s atmosphere, to help them create artificial guide stars for their AO system. Gemini Observatory’s Chad Trujillo said in a press release that the gases left by the Perseids are:

… a form of natural pollution. [It] doesn’t actually pose a threat to humanity … it’s been around for eons and seems to have had no adverse effect … but it’s a real boon to astronomers.

One of the gases left behind by meteors is sodium, which collects in a layer about 60 miles (90 kilometers) above the Earth. The reason astronomers are so fond of this particular pollution layer is because we can make it glow by using a sodium laser to excite this sodium and produce temporary, artificial stars wherever we like.

Astronomers use these artificial stars, called laser-guide-stars, for Adaptive Optics systems such as that at the Gemini South telescope in Chile. Adaptive Optics allows scientists to see the universe more clearly than previously. The guide stars are used to help calibrate the system, that is, to provide a standard with which other readings can be correlated, in order to check the instrument’s accuracy. 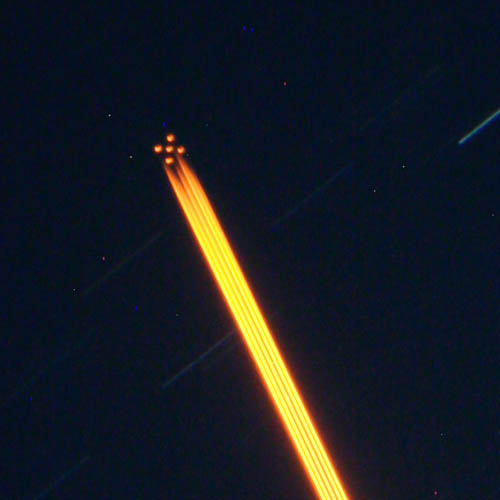 Close up of the Gemini South (GeMS) laser which splits into 5 points to create a ‘constellation’ of guide stars over a larger patch of sky. The guide stars are used to help calibrate the Adaptive Optics system. Image via Gemini Observatory/AURA 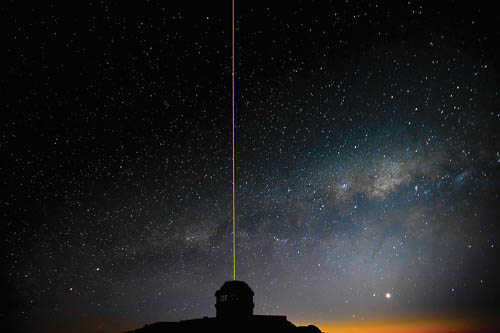 Moon and Venus at dusk. Perseid meteors this weekend

Bottom line: These days, you don’t often hear of professional astronomers conducting studies of annual meteor showers. These showers have been seen for thousands of years and, nowadays, are more for enjoyment than science. But astronomers at Gemini Observatory say they are using gases left behind by this weekend’s Perseid meteors to create artificial guide stars for their Adaptive Optics system.