A dark halo of gas that envelopes our neighboring Andromeda galaxy is 1,000 times more massive than previously measured and stretches halfway to the Milky Way. 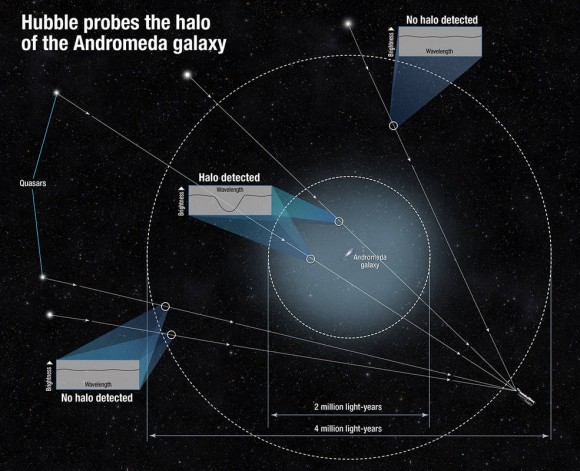 Scientists using NASA’s Hubble Space Telescope have discovered that an immense halo of gas enveloping the Andromeda galaxy, our nearest massive galactic neighbor, is about six times larger and 1,000 times more massive than previously measured. The dark, nearly invisible halo stretches about a million light-years from its host galaxy, halfway to our own Milky Way galaxy. Their findings were published in the May 4, 2015 edition of the Astrophysical Journal.

The Andromeda galaxy lies 2.5 million light-years away and in our night sky, looks like a faint spindle, about six times the diameter of the full moon. It is considered a near-twin to our own Milky Way galaxy.

Nicolas Lehner of the University of Notre Dame, Indiana is the study’s lead investigator. Lehner said:

Halos are the gaseous atmospheres of galaxies. The properties of these gaseous halos control the rate at which stars form in galaxies according to models of galaxy formation. The gargantuan halo is estimated to contain half the mass of the stars in the Andromeda galaxy itself, in the form of a hot, diffuse gas. If it could be viewed with the naked eye, the halo would be 100 times the diameter of the full moon in the sky. This is equivalent to the patch of sky covered by two basketballs held at arm’s length.

But where did the giant halo come from? Large-scale simulations of galaxies suggest that the halo formed at the same time as the rest of Andromeda. The team also determined that it is enriched in elements much heavier than hydrogen and helium, and the only way to get these heavy elements is from exploding stars called supernovae. The supernovae erupt in Andromeda’s star-filled disk and violently blow these heavier elements far out into space. Over Andromeda’s lifetime, nearly half of all the heavy elements made by its stars have been expelled far beyond the galaxy’s 200,000 light-year diameter stellar disk.

Because we live inside the Milky Way, scientists cannot determine whether or not such an equally massive and extended halo exists around our own galaxy. It’s a case of not being able to see the forest for the trees. If the Milky Way does possess a similarly huge halo, the two galaxies’ halos may be nearly touching already and quiescently merging long before the two massive galaxies collide. Hubble observations indicate that the Andromeda and Milky Way galaxies will merge to form a giant elliptical galaxy beginning about four billion years from now. 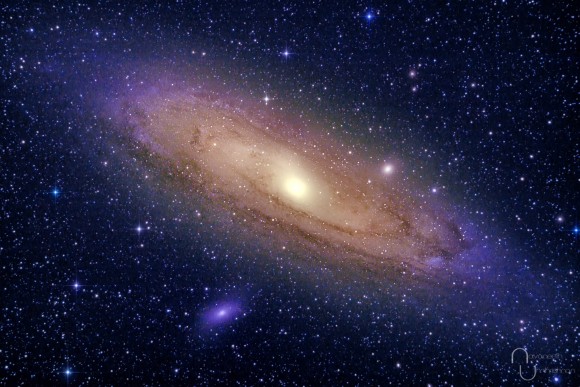 Navaneeth Unnikrishnan created this wonderful stacked image of the Andromeda galaxy with images taken on November 9, 2014.

For this study, because the gas in Andromeda’s halo is dark, the team looked at bright background objects through the gas and observed how the light changed. This is a bit like looking at a glowing light at the bottom of a pool at night. The ideal background “lights” for such a study are quasars, which are very distant bright cores of active galaxies powered by black holes. The team used 18 quasars residing far behind Andromeda to probe how material is distributed well beyond the visible disk of the galaxy.

Earlier research from Hubble Cosmic Origins Spectrograph (COS)-Halos program studied 44 distant galaxies and found halos like Andromeda’s, but never before has such a massive halo been seen in a neighboring galaxy. Because the previously studied galaxies were much farther away, they appeared much smaller on the sky. Only one quasar could be detected behind each faraway galaxy, providing only one light anchor point to map their halo size and structure. With its close proximity to Earth and its correspondingly large footprint on the sky, Andromeda provides a far more extensive sampling of a lot of background quasars.

Bottom line: According to a study published in the May 4, 2015 edition of the Astrophysical Journal, an immense halo of gas enveloping the Andromeda galaxy is about six times larger and 1,000 times more massive than previously measured. The dark, nearly invisible halo stretches about a million light-years from its host galaxy, halfway to our own Milky Way galaxy.