The afterglow of the Big Bang points to invisible dark matter, in places where galactic jets travel at near light speed. 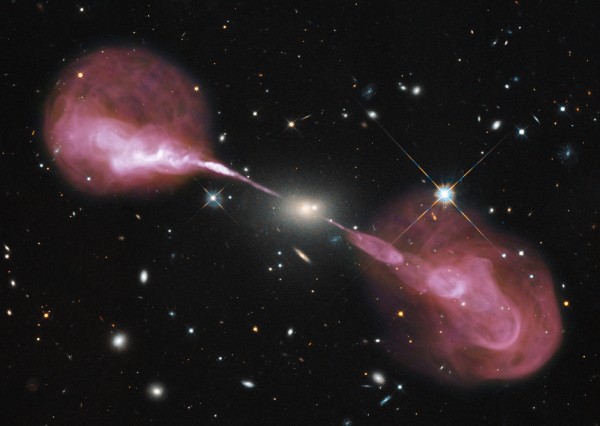 Astronomers have used the cosmic microwave radiation – the afterglow of the Big Bang – to locate sites of invisible dark matter in our universe. As it happens, the locations of dark matter correlate with places where jets of material from the centers of massive active galaxies travel at near light speed. Rupert Allison of Oxford University led the study, which he presented this week (July 6, 2015) at the National Astronomy Meeting in Wales.

Mysterious dark matter accounts for about 26% of the energy content of the universe. In modern theories of the universe, galaxies formed around concentrations of dark matter when the universe was young. Dark matter is invisible, and no one knows exactly what it is. But it does have a gravitational effect: a blob of dark matter pulls in normal matter (like electrons, protons and neutrons) through its own gravity. Eventually, today’s astronomers believe, this pull by dark matter brought together the material needed to create galaxies and their stars.

As astronomers look outward in space – and therefore back in time – they see that many of the largest galaxies are active galaxies with active supermassive black holes in their cores. At this earlier period of the universe, gas falling towards the galaxies’ central black holes is ejected out as jets of particles and radiation. The jets often stretch for millions of light-years from their host galaxy – far larger in extent than the galaxy itself. The material in the jets is moving outward from the galaxy’s core at near light speed.

Galaxies form around dark matter; therefore, the most massive galaxies – the ones we define as active galaxies, with active central black holes and accompanying jets – would be expected to reside in regions of our universe with higher-than-average concentrations of dark matter.

But, since dark matter is invisible, testing this idea is not straightforward.

Some dark matter can be detected via gravitational lensing, that is, the effect on light of powerful gravitational fields, as described by Einstein’s general theory of relativity. Observing how dark matter distorts light lets astronomers deduce its location and measure its mass.

As it happens, the universe also has what Rupert Allison and his team describe as “an ideal reference map” – the Cosmic Microwave Background (CMB), or all-pervading echo from the Big Bang. The CMB is a relic of the formation of the cosmos. It’s a snapshot of the universe as it was just 400,000 years after the Big Bang. The light from this epoch has taken more than 13 billion years to reach us. 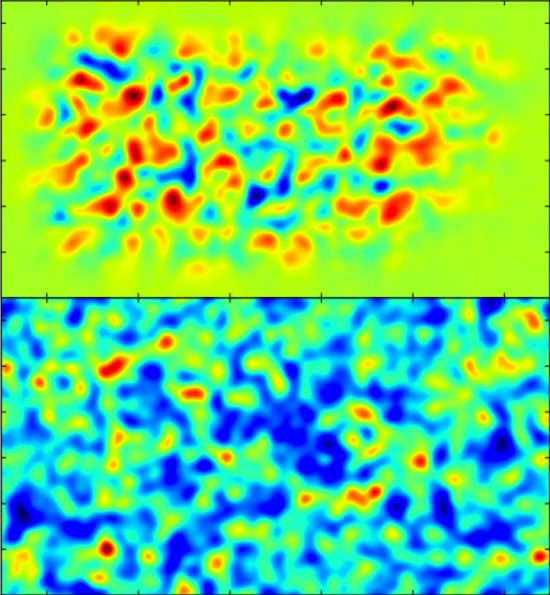 Light coming from this very early time travels through most of the universe unimpeded. The lumpy dark matter, however, exerts a small gravitational tug on the light, deflecting it slightly from a straight-line path, rather like a lens does in a pair of glasses.

As suspected, the dark matter is found where powerful radio jets from active galaxies are more common – revealing a deep-lying correlation between the most massive galaxies today and the afterglow of the Big Bang.

Without dark matter, big galaxies wouldn’t have formed and supermassive black holes wouldn’t exist. And without black holes, we wouldn’t see intergalactic jets. So we have found another signature of how dark matter shapes today’s universe.

These scientists now hope to use new instruments to improve their measurements and more clearly understand how radio jets and their host galaxies change over the history of the universe. They sa that telescopes such as Advanced ACTPol and the Square Kilometer Array will provide the complementary data to make this hope a reality.

Bottom line: Astronomers used the afterglow of the Big Bang – the Cosmic Microwave Background (CMB) – to locate sites of invisible dark matter in our universe. The dark matter can be found in places where galactic jets, moving at near light speed, extend from the center of active galaxies. This makes sense according to modern theories of the universe, which say the most massive galaxies should form around the densest concentrations of dark matter.