The Gaia-Enceladus dwarf galaxy slammed into our Milky Way 11.5 billion years ago. It added the mass of 50 billion suns to the Milky Way. Grand names and big numbers! Now new knowledge of this collision comes from a single bright star visible in Southern Hemisphere skies. 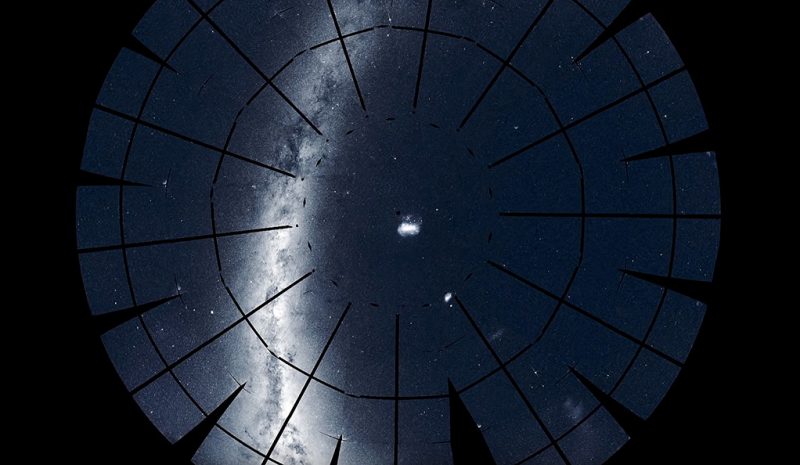 A mosaic of the Milky Way as seen in Earth’s Southern Hemisphere skies, produced via NASA’s TESS planet-hunter. See the Magellanic Clouds? The dwarf galaxy that slammed into the Milky Way early in its history is thought to have been about the same mass as the Large Magellanic Cloud. Image via NASA/ MIT/ TESS/ Ethan Kruse/ Yale.

There’s a new chapter in the tale of an ancient collision between our Milky Way and a now-mostly-defunct dwarf galaxy called Gaia-Enceladus. A collision scenario with this galaxy was first proposed in 2018, based largely on data from the European Space Agency’s great Gaia mission. The idea is that this dwarf galaxy – which is also sometimes called the Sausage galaxy or the Gaia-Enceladus-Sausage – merged with our Milky Way long ago. During the merger, astronomers believe, the Milky Way gained some 50 billion solar masses of stars, gas and dark matter. Astronomers said on January 13, 2020, that they’ve now pinned down the date of the collision. They said it happened 11.5 billion years ago.

That means it happened when the Milky Way – our home galaxy – was very young. Our galaxy is now about 13.5 billion years old. Thus the collision took place when our galaxy was only 2 billion years old. The research team followed the life story of a single bright star in the constellation Indus, visible today from Earth’s Southern Hemisphere, to obtain this result.

The University of Birmingham in the U.K. led this research, which was aided by dozens of astronomers from around the world. The work was published January 13 in the peer-reviewed journal Nature Astronomy.

The research team followed the life story of a single, bright star in the Indus constellation, visible today from Earth’s Southern Hemisphere. The scientists said this star, nu Indi, was already orbiting inside the smaller Milky Way prior to the Gaia-Enceladus collision, which unfolded over millions of years. As the merger progressed, it altered nu Indi’s orbit around the center of the Milky Way, providing a marker for when the merger happened.

My role was to determine the age of the star using seismic data. Like many low-mass stars, this star pulsates, or quakes, continuously. The quakes can be described as a series of tones and overtones.

The researchers got data on nu Indi’s quakes from NASA’s TESS planet-hunter. They also used data collected via the Gaia mission.

Basu and her colleagues calculated “frequencies” from nu Indi’s tones and overtones. Those frequencies, in turn, indicated the star’s physical structure and properties. From there, the researchers were able to gauge nu Indi’s stage of development, factor in its brightness, and estimate its age.

Knowing nu Indi’s age provided a limit for when the merger could have taken place, the researchers said.

University of Birmingham astrophysicist Bill Chaplin, lead author of the study, said determining the natural oscillations of stars – called asteroseismology – is a way to better understand the history of stars and the environments in which they formed. Chaplin said:

This study demonstrates the potential of asteroseismology with TESS, and what is possible when one has a variety of cutting-edge data available on a single, bright star.

We know today that the Milky Way was formed by the merger of many small galaxies. This is the first time we have been able to determine when such a merger happened. This is an important step in understanding when the Milky Way accreted, or collected, its mass.

Bottom line: The Gaia-Enceladus dwarf galaxy collided with our Milky Way 11.5 billion years ago. It added 50 billion solar masses to the Milky Way! Grand names and big numbers. Yet our newly refined knowledge of when it happened comes from a single bright star visible in Southern Hemisphere skies.