Only a small number of hypervelocity stars have ever been discovered. Now ESA’s Gaia mission has revealed 20 more. 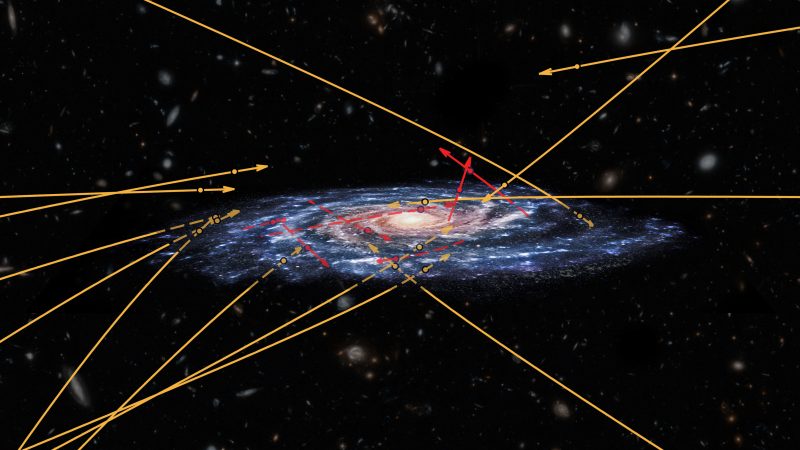 ESA’s Gaia mission is proving to be a great provider of fascinating data. Launched in 2013, the mission had its second data release in April, providing a catalog of exact positions and motions for 1.3 billion stars. Since then, astronomers from around the world have been mining the data for many different purposes – for example, to trace the path of the interstellar object ‘Oumuamua back to its home solar system. On October 2, 2018, ESA announced that astronomers – who’d been using Gaia’s second data release to look for high-velocity stars being kicked out of the Milky Way – were surprised to find stars instead rushing inwards, perhaps from another galaxy.

Gaia gathers its data via what’s called astrometry. Its job is to scan the sky repeatedly, observing each of its targeted stars an average of 70 times over its five-year mission. We know our sun and all the stars in the Milky Way are moving continuously in great orderly masses around the center of our galaxy. We know that … but, before Gaia, we didn’t have many details about how each star moves. How could we? The data for so many stars would be (are) massive; collecting the data, storing them and analyzing them requires today’s spacecraft and computer technologies. Of the new discovery of 20 high-velocity stars, ESA said in a statement:

For 1.3 billion stars, Gaia measured positions, parallaxes – an indicator of their distance – and 2-D motions on the plane of the sky. For 7 million of the brightest ones, it also measured how quickly they move toward or away from us.

Elena Maria Rossi of Leiden Observatory, one of the authors of the new study, said:

Of the 7 million Gaia stars with full 3-D velocity measurements, we found 20 that could be traveling fast enough to eventually escape from the Milky Way.

These could be stars from another galaxy, zooming right through the Milky Way.

The astronomers speculate the stars might have come from the Large Magellanic Cloud, a satellite galaxy to our Milky Way. Or they might have originated in a galaxy even farther away. If so, ESA said:

… they carry the imprint of their site of origin, and studying them at much closer distances than their parent galaxy could provide unprecedented information on the nature of stars in another galaxy – similar in a way to studying Martian material brought to our planet by meteorites.

Ultimately, Gaia’s goal is to provide the first-ever 3-D catalog of star positions and motions in the Milky Way. For now, though, as astronomers mine the data gathered so far, they’re providing many fascinating glimpses of the behavior of Milky Way stars.

Gaia’s view of our home galaxy, the Milky Way, in a 360-degree interactive view (click arrows in upper left) via ESA/Gaia/DPAC; ATG medialab.

Bottom line: Astronomers working with Gaia’s second data release have discovered 20 more high-velocity (aka hypervelocity) stars that appear to be coming from another galaxy and racing right through our galaxy.