NASA has selected 16 cool new futuristic space technology concepts for further study. Four of them are from NASA’s own Jet Propulsion Laboratory (JPL), including a railway system on the moon to move cargo. 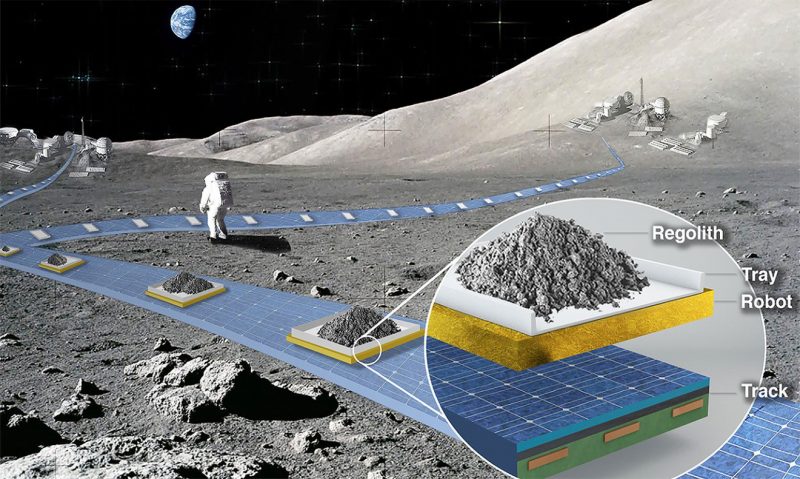 One of the new proposals from JPL is FLOAT, where a railway system would be used on the moon to move cargo. Magnetic robots would levitate over the track. Image via Ethan Schaler/ NASA.

Space is a busy place these days, relatively speaking, with numerous missions in our solar system exploring planets, asteroids, comets and the sun. All of the excitement and insights of the new space missions are possible because of ever-changing advances in technology. But what about the future? What technological marvels lie ahead?

NASA has provided of glimpse of that future, with the selection of 16 new futuristic space technology concepts, including four from NASA’s own Jet Propulsion Laboratory (JPL), the space agency announced on February 25, 2021.

NASA has approved grants from the NASA Innovative Advanced Concepts (NIAC) program to be given to over a dozen researchers to study their concepts’ feasibility. This includes scientists from NASA itself, industry and academia.

NIAC Fellows are known to dream big, proposing technologies that may appear to border science fiction and are unlike research being funded by other agency programs. We don’t expect them all to come to fruition but recognize that providing a small amount of seed-funding for early research could benefit NASA greatly in the long run.

SWIM is an exciting new proposal where centimeter-scale micro-robots would be used to explore the oceans of moons such as Europa and Enceladus. Image via Ethan Schaler/ NASA.

STMD has selected 16 Phase I proposals for 2021. Each proposal will receive an initial grant of $125,000 from NASA. Proposals that are successful in their nine month feasibility studies are then eligible to apply for Phase II grants. All proposals are considered to be early-stage technology development efforts with no guarantee of being actual missions.

The four JPL proposals include a “railroad” on the moon called Flexible Levitation on a Track (FLOAT), where cargo would autonomously be transported using magnetic robots that would levitate over a flexible track. The tracks would be unrolled on the surface rather than being built in-place. FLOAT robots would have no moving parts and levitate over the track to minimize lunar dust abrasion/ wear, unlike other lunar robots with wheels, legs or tracks.

Another proposal, from the same researcher, would be Sensing with Independent Micro-swimmers (SWIM), using centimeter-scale 3-D printed micro-robots to explore the oceans of some of the water worlds in our solar system, such as Europa or Enceladus. The micro-swimmers would be deployed individually or as a swarm from a single SESAME robot mothercraft. This would increase the chances of finding evidence of life in those alien oceans. How cool would that be?

ARD3 would be a deep drilling system used to search for liquid water and possible evidence of life below the Martian surface. The ultimate goal would be to drill down as far as 0.9 miles (1.5 km). Image via Planet Enterprises/ James Vaughan Illustration/ NASA.

The third JPL proposal is Passively Expanding Dipole Array for Lunar Sounding (PEDALS), a series of dipole antennas on the moon to study the subsurface composition and structure. PEDALS is delivered to or near the surface by a lander or orbiter, can survive moderate impacts if needed, unrolls passively using shape memory materials on the surface, and later, probes the subsurface composition and structure.

The fourth JPL proposal is the Solar System Pony Express, where “courier” satellites use optical communications to receive 1-3 petabits of data from a planetary surveyor at least once per year. Then they travel closer to Earth where they are able to quickly downlink the data.

The other proposals include:

Making Soil for Space Habitats by Seeding Asteroids with Fungi 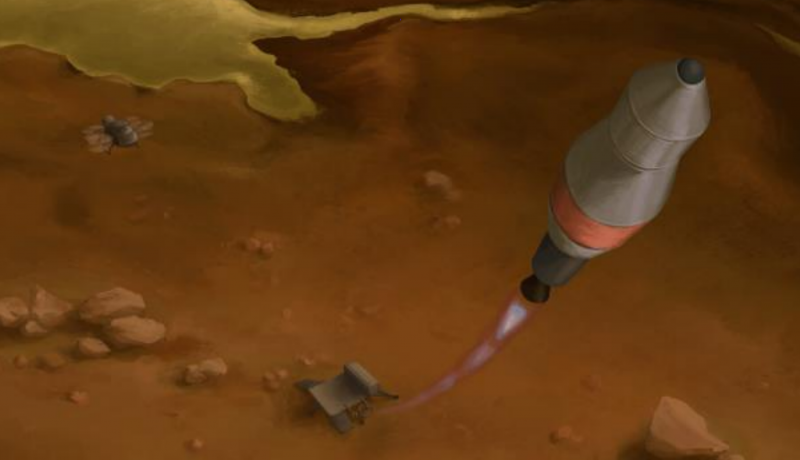 The Titan Sample Return Using In-Situ Propellants mission would obtain samples from the surface of Saturn’s largest moon Titan and bring them back to Earth for study. Image via Steven Oleson/ NASA.

ReachBot would be designed to explore caves or vertical cliff walls on Mars, something that current rovers can’t easily do. Who knows what might be discovered?

The Titan Sample Return Using In-Situ Propellants mission would obtain samples from the surface of Saturn’s largest moon Titan and bring them back to Earth for study. This could provide crucial clues to the origin of life on Earth, since Titan is similar to what the primordial Earth was like a few billion years ago. Some scientists even think that Titan’s methane seas and lakes might be able to support some form of very un-earthly life even today.

Autonomous Robotic Demonstrator for Deep Drilling (ARD3) would be a deep drilling system used to search for liquid water and possible evidence of life below the Martian surface. The ultimate goal would be to drill down as far as 0.9 miles (1.5 km). The rover would drill below the layered deposits at the south pole, where evidence for subsurface lakes has already been found. 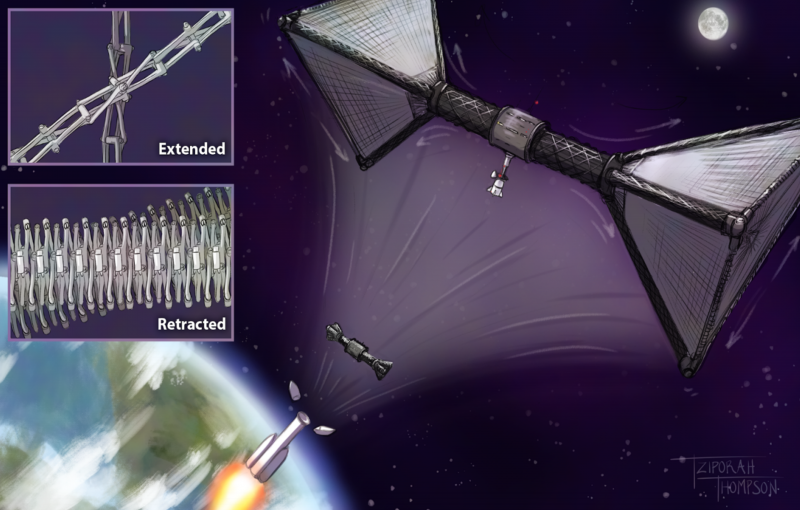 In the Kilometer-Scale Space Structures from a Single Launch proposal, one-kilometer long (0.6 miles) deployable structures could be launched into orbit with a single rocket launch. That would be large enough to produce artificial gravity for astronauts. Image via Zachary Mancheste/ Tzipora Thompson/ NASA.

It will be interesting to see which of these proposals move on to Phase II. Some, of course, might be more exciting to the public than others, but all present important new ideas to further advance space technology in the 21st century. NIAC Program Executive Jason Derleth said:

There is an overwhelming number of new participants in the program this year. All but two of the researchers selected for Phase I awards will be first-time NIAC grant recipients, showing that NASA’s early-stage opportunities continue to engage new creative thinkers from all over the country.