Exoplanet weather: Hot and cloudy, or hot and clear, again

First-ever map of the distribution of clouds on an exoplanet shows what the weather would be like on a light, hot, tidally locked world.

The one inexhaustible subject on planet Earth is our weather, because it’s constantly changing. But, on the exoplanet Kepler 7b – which orbits a star more massive than our sun and about twice the sun’s radius – the weather is more lopsided and yet more stable than the weather on Earth or even Jupiter, whose mass more closely resembles the exoplanet. An international team of scientists has just mapped the distribution of clouds on this world located some 1,000 light-years away. Scientists at MIT, which were part of the study, said in a press release today (October 3, 2013);

On any given day, the exoplanet … is heavily overcast on one side, while the other side likely enjoys clear, cloudless weather.

The MIT researchers, along with scientists at other institutions, completed their first-ever map of the distribution of clouds on an exoplanet using data from NASA’s Kepler and Spitzer space telescopes. The researchers analyzed the light originating from Kepler 7b at various phases of its orbit, finding that much of the planet’s reflectivity is due to the presence of clouds, and that this cloud cover is unevenly distributed. They published their results in Astrophysical Journal Letters. 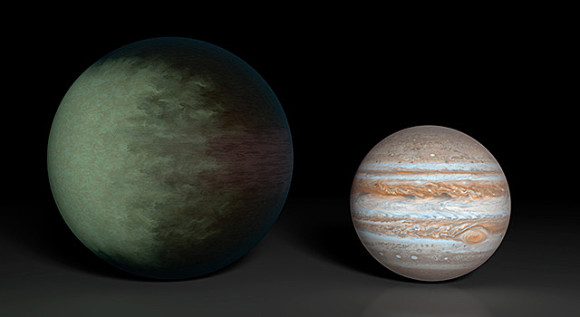 Kepler 7b (left), is 1.5 times the radius of Jupiter (right). Located about 1,000 light-years away, it is the first exoplanet to have its clouds mapped.

Kepler 7b is considered a hot Jupiter. It’s composed mostly of gas, and is about 50 percent larger than Jupiter, but has only about half Jupiter’s mass. In other words, Kepler 7b is not very dense; scientists have said it is as light as styrofoam.

Plus Kepler 7b is tidally locked, meaning it presents the same face to its star at all times, much as Earth’s moon does to Earth. From Earth, Kepler 7b appears to wax and wane as it circles its star, much like the phases of our moon.

What would the weather be like on a light, hot, tidally locked world? Very different from Earth, or Jupiter.

As of its most recent update yesterday (October 2, 2013), the Exoplanet Encyclopedia lists 756 planetary systems beyond our solar system, with 992 exoplanets and 168 multiple planet systems. Kepler 7b will always have a special place among these worlds, though, as the fourth of the first five planets to be confirmed by NASA’s Kepler spacecraft.

Bottom line: Scientists have completed the first-ever map of the distribution of clouds on an exoplanet. They’ve found that Kepler 7b, which is located some 1,000 light-years away, has a very stable cloud cover that is also lopsided. In other words, half the planet is always covered by clouds, while the other half always has clear skies.