Why are astronomers excited about the first directly obtained visible light spectrum – or rainbow array of visible colors – bounced from the surface of an exoplanet? 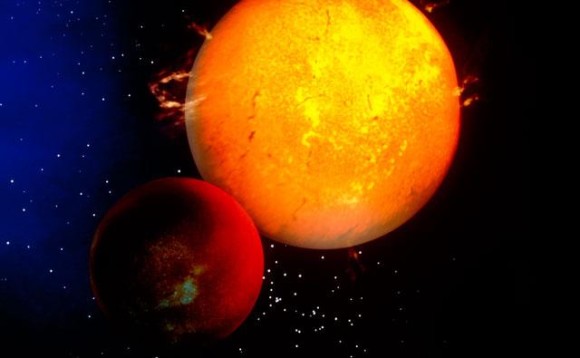 In a giant step forward in exploring exoplanets, astronomers in Chile announced on April 22, 2015 that they used 51 Pegasi b – a hot Jupiter, located some 50 light-years from Earth in the direction of our constellation Pegasus – to obtain the first-ever direct detection of a spectrum of visible light reflected off an exoplanet’s surface. They’re excited! And here’s why.

The exoplanet 51 Pegasi b will forever be remembered as the first confirmed exoplanet found orbiting an ordinary star like our sun. That was in 1995, and now more than 1900 exoplanets in 1200 planetary systems have been confirmed, and billions more are suspected in our Milky Way.

The gathering of light spectra is a powerful tool for astronomers. This tool will eventually enable astronomers to know what chemical elements are present in the atmospheres of exoplanets like 51 Pegasi b.

And so this first direct detection of a visible light spectrum from an exoplanet is a wonderful step. It suggests that more such detections will follow, just as the discovery of thousands more exoplanets followed the discovery of 51 Pegasi b. It means our technology has advanced to the point where the direct detection of visible light spectra from exoplanets has become possible. That’s exciting, not just because astronomers want to know what’s out there (spectra can reveal some physical characteristics of the exoplanets), but also because someday we might use exoplanet spectra to detect the first biosignatures – signs of life or at least signs that the potential for life exists – from exoplanet atmospheres.

This announcement, by the way, comes in the same week that NASA announced a big new initiative for a collaborative effort for exoplanet life searchs. Read more about NASA’s new initiative, called NExSS, here.

Before this new direct detection of a visible light spectrum from an exoplanet, astronomers were able to study exoplanet atmospheres only if the exoplanet and its star were lined up with respect to Earth, so that we could detect the exoplanet’s transit in front of its star. Read more about these sorts of studies from astronomer Sara Seager at MIT.

Currently, the most widely used method to examine an exoplanet’s atmosphere is to observe the host star’s spectrum as it is filtered through the planet’s atmosphere during a transit of the planet in front of its star. This technique is known as transmission spectroscopy.

It only works, obviously, when the planet and its star are aligned with Earth in such a way that transits are possible. Since observations of transits are one of the primary ways exoplanets are currently detected, the technique does work with many of the known exoplanets, but it’s a very limiting technique that will work for only specifically aligned exoplanet systems.

The new technique used with 51 Pegasi b – which is sometimes unofficially called Bellerophon – does not depend on finding a planetary transit. So the technique can potentially be used to study many more of the billions of exoplanets believed to exist in our Milky Way galaxy.

The astronomers who directly obtained a spectrum from light bounced from 51 Pegasi b didn’t mention biosignatures in their statement released April 22. Those future biosignature studies are being discussed by astronomers, but are still out on the far horizon. Instead, Portuguese astronomer Jorge Martin, currently a PhD student at the European Southern Observatory (ESO) in Chile, who led the new 51 Pegasi b research, said:

This type of detection technique is of great scientific importance, as it allows us to measure the planet’s real mass and orbital inclination, which is essential to more fully understand the system. It also allows us to estimate the planet’s reflectivity, or albedo, which can be used to infer the composition of both the planet’s surface and atmosphere.

Those are the results they were actually able to obtain at this time via this particular observation. 51 Pegasi b was found to have a mass about half that of Jupiter’s and an orbit with an inclination of about nine degrees to the direction to the Earth. The planet also seems to be larger than Jupiter in diameter and to be highly reflective. These are typical properties for a hot Jupiter that is very close to its parent star and exposed to intense starlight.

The team used the HARPS instrument on the ESO 3.6-meter telescope at the La Silla Observatory in Chile for their observations of 51 Pegasi b. They said HARPS was essential to their work, but also said the fact that their results were obtained using the ESO 3.6-meter telescope, which has “a limited range of application with this technique,” is exciting news for astronomers. Existing equipment like this will be surpassed by much more advanced instruments on larger telescopes, such as ESO’s Very Large Telescope and the future European Extremely Large Telescope, they said. Astronomer Nuno Santos, who is a co-author on the study, said:

We are now eagerly awaiting first light of the ESPRESSO spectrograph on the VLT so that we can do more detailed studies of this and other planetary systems.

The blog Exoplanetology describes how you can ‘exogaze’ at 51 Pegasi b. Cool, yes?

Bottom line: Astronomers have obtained the first direct visible light spectrum from an exoplanet, 51 Pegasi b, which lies about 50 light-years from Earth. They used their observations to find a more precise mass (half that of Jupiter’s) and orbital inclination (9 degrees with respect to Earth’s direction), and they expressed their excitement about some of the powerful results sure to come later, when exoplanet spectra are more routinely obtained and studied.