First dust grains from beyond our solar system

A collector dropped to Earth by the Stardust spacecraft may have contained the first known contemporary dust grains from outside our solar system. 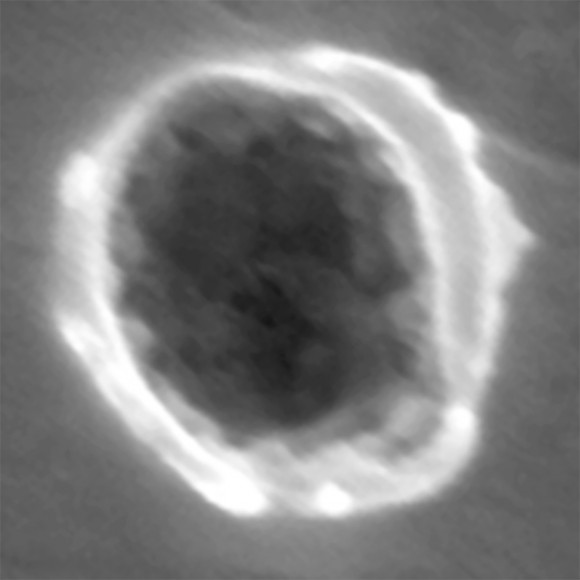 A top-down scanning electron microscope view of one of the interstellar dust impacts in the foil aboard the Stardust spacecraft. Four hundred of these craters would span the width of a human hair. The dust particle residue is visible as the “bumpy” terrain inside the crater. Image via Rhonda Stroud, Naval Research Laboratory.

NASA’s Stardust team reports that it has found seven microscopic dust motes that probably came from outside our solar system. If confirmed, they would be the first confirmed samples of contemporary interstellar dust. This dust drifting between stars in our Milky Way galaxy may have been created in a supernova explosion millions of years ago. It may have been altered by eons of exposure to the extremes of space. The team collected the dust via the Stardust spacecraft, which delivered its aerogel and aluminum foil dust collectors to Earth in 2006. Since then, a team of scientists has combed through the collectors. Now they believe they’ve found the interstellar dust they were seeking.

Andrew Westphal, a physicist at UC Berkeley and lead author of a report on the particles published in the August 15, 2014 issue of the journal Science, said:

They are very precious particles.

And indeed they are the result of many years of searching. In 1999, scientists launched the Stardust spacecraft to fly through the coma of Comet Wild-2. Its mission was to capture dust left behind by the comet with aerogel tiles and aluminum foils mounted on the front of a two-sided collector. Meanwhile, collectors mounted on the rear of the spacecraft were designed to catch particles from the “snowstorm of interstellar dust streaming through the galaxy,” said UC Berkeley research physicist Anna Butterworth. She said:

This dust is relatively new, since the lifetime of interstellar dust is only 50 to 100 million years, so we are sampling our contemporary galaxy.

As Stardust flew by Earth in 2006, it dropped its separate comet and interstellar dust collectors by parachute. Each was a tennis-racket sized mosaic of 132 aerogel tiles. A consortium of scientists led by Westphal began to analyze the interstellar collectors. Scientists at the Johnson Space Center in Houston have scanned half the panels at various depths through the transparent aerogel and turned these scans into movies.

In addition to Westphal and team’s paper in Science, 12 other papers about the particles are now available online and will appear next week in the journal Meteoritics & Planetary Science.

Westphal cautioned that additional tests must still be done before the team can say definitively that these are pieces of debris from interstellar space. But if they are, the particles could help explain the origin and evolution of interstellar dust that until now could only be guessed from astronomical observations.

Read more about the collection of interstellar dust grains by Stardust from the Berkeley News Center. 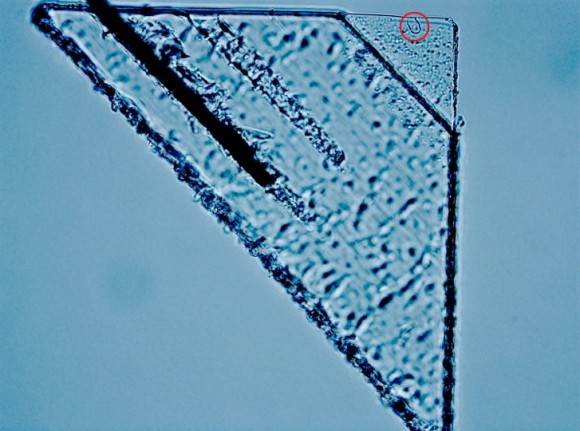 A large interstellar dust track found in the Stardust spacecraft’s aerogel collectors. This mote of dust was probably traveling so fast that it vaporized upon impact. Image via Andrew Westphal, UC Berkeley.

Bottom line: Scientists working with materials parachuted to Earth in 2006 by the Stardust spacecraft have found 7 microscopic grains of dust, which they believe are the first samples of contemporary dust from outside our solar system.