Here it is! A flower grown on the International Space station blooms. 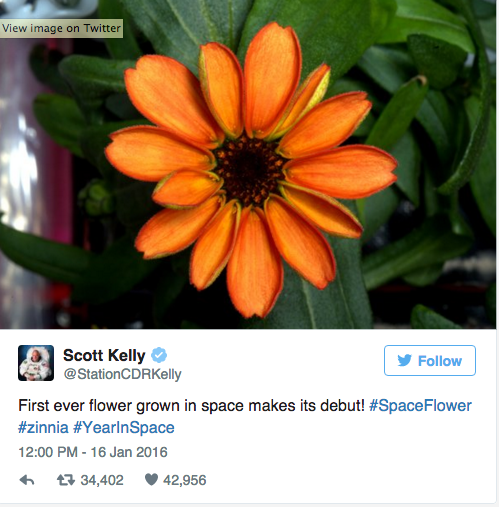 On Saturday (January 16, 2016), International Space Station (ISS) astronaut Scott Kelly tweeted out an image of what he described as the first flower grown in space.

The orange zinnia – a plant related to the sunflower – is from a small garden on the ISS in the VEG-01 module – known as “Veggie” – an experiment focused on growing plants in space. The plant in the picture is the first of the zinnia’s to successfully flower.

On November 16, 2015 NASA astronauts activated the Veggie plant growth system and its rooting “pillows” containing zinnia seeds on the space station in the first-ever flowering crop experiment on the orbiting laboratory. In the days since, LED lights were on for 10 hours and off for 14 hours in order to stimulate the plants to flower.

In late December, Kelly tweeted that the plants weren’t looking too good, and told the ground team:

You know, I think if we’re going to Mars, and we were growing stuff, we would be responsible for deciding when the stuff needed water. Kind of like in my backyard, I look at it and say ‘Oh, maybe I should water the grass today.’ I think this is how this should be handled.

The Veggie team on Earth created what was dubbed The Zinnia Care Guide for the On-Orbit Gardener, and gave basic guidelines for care while putting judgment capabilities into the hands of the astronaut who had the plants right in front of him. Rather than pages and pages of detailed procedures that most science operations follow, the care guide was a one-page, streamlined resource to support Kelly as an autonomous gardener. By the first week in January, the flowers were on the rebound.

The Veggie plant growth facility was installed on the ISS in early May of 2014, and the first crop – red romaine lettuce – was activated for growth. The first growth cycle faced some issues, but the crew was able to harvest and eat lettuce from the second crop in August, 2015.

Although Kelly has made the claim that these are the first flowers grown in space, The Verge reports that this might not be true. Astronaut Don Pettit grew a sunflower on the ISS in in 2012 that looked like this.

NASA is maturing Veggie technology aboard the space station to provide future pioneers with a sustainable food supplement – a critical part of NASA’s Journey to Mars.