Scientists caught a comet’s fiery death plunge into the sun in July 2011 on camera, and made a movie of it. Check it out!

New sun-grazing comets appear every few days to scientists with the right equipment to see them. But – until recently – these same scientists said they’d never seen a comet’s final moments just before plunging into the sun. Then on July 6, 2011, NASA’s Solar Dynamics Observatory (SDO) caught multiple images of Comet C/2011 N3 flying through the sun’s atmosphere and vaporizing. In the movie below – made from these images – the comet can be seen moving in from the right side of the sun. Although the movie is sped up, it took the comet 20 minutes to cross in front of the sun’s face as it evaporated in the searing heat. The movie – which is the subject of a paper released January 20, 2012 in the journal Science – is said to be the first-ever showing a comet as it goes into the sun.

Watch this at full screen. The comet enters from the right. It is very faint so look carefully!

Can you see it? Consider this. In real time, the comet was moving along at almost 400 miles per second. What you saw was the comet literally being evaporated away in the sun’s intense heat. Before July 2011, no one had ever seen that happen.

As detailed in the Science paper, watching the comet’s death provides a new way to estimate the comet’s size and mass. The comet turns out to be somewhere between 150 to 300 feet (45 to 90 meters) long and have about as much mass as an aircraft carrier. What’s more, according to the scientists who studied this event, the comet is thought to have dissolved more than a million tons of electrically charged gas into the sun’s atmosphere. The scientists said they now believe these comet vapors mixed with the solar wind and blew back into the solar system. Thus it might be possible to detect these comet corpses as they waft past Earth on the solar wind. NASA has a great article about that here. 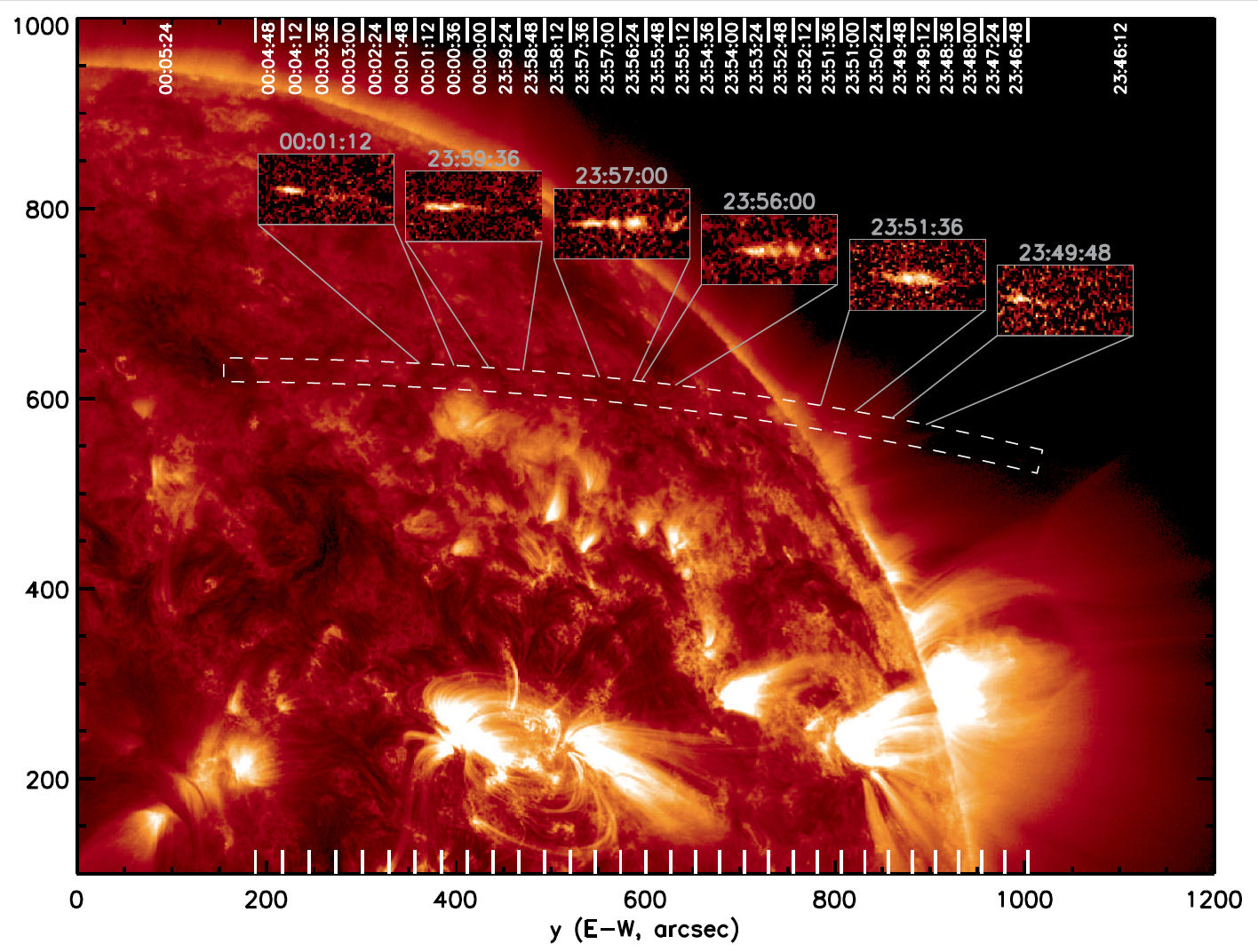 Seeing the comet’s fiery plunge in such a detailed way let scientists learn a lot about it. This comet made it to within 62,000 miles (about 100,000 kilometers) of the sun’s surface before evaporating. In the last 20 minutes of its existence when it was visible to NASA’s SDO,, it had broken up into a dozen or so large chunks with sizes between 30 to 150 feet (10 to 45 meters) across. They were embedded in the comet’s “coma” — the tenuous cloud surrounding the comet — of approximately 800 miles (1,200 km) across, and followed by a glowing tail of about 10,000 miles (16,000 km in length).

Scientists said the movie shows the comet’s coma and tail – not its core. They said the light in the tail pulses, getting dimmer and brighter over time. The team speculates that the pulsing variations are caused by successive breakups of each of the individual chunks that made up the comet material as it fell apart in the sun’s intense heat. 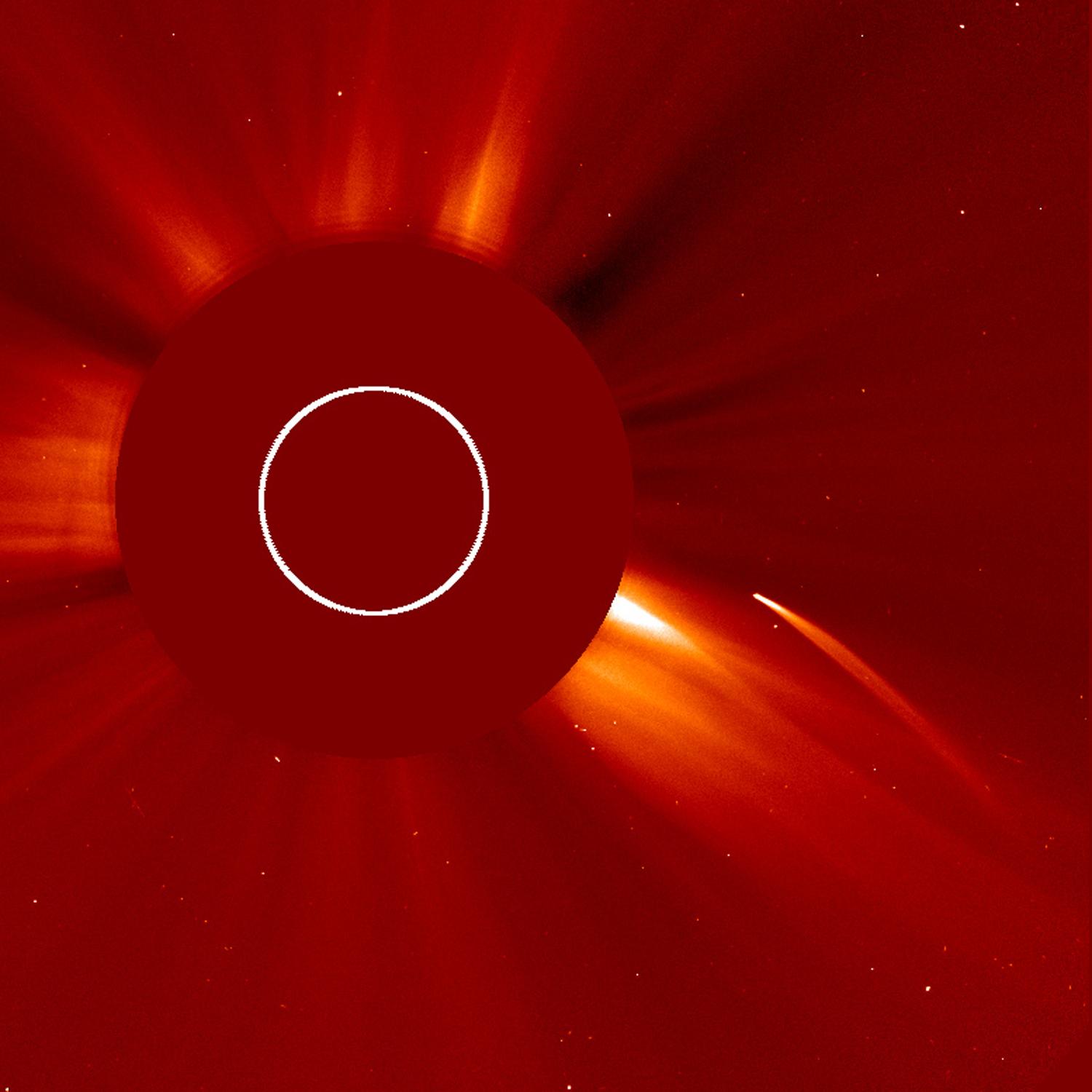 The Solar and Heliospheric Observatory (SOHO) captured this beautiful image of Comet C/2011 N3 as it dived toward the sun on July 5 and July 6, 2011. The sun’s bright light is blocked out by a coronograph. Credit: SOHO (ESA & NASA)

The image above is from the Solar and Heliospheric Observatory (SOHO), which discovered Comet C/2011 N3 before its plunge into the sun. The comet is that graceful arc on the right. Comet C/2011 N3 is from a fascinating group of sungrazing comets known as the Kreutz comets. They have been observed since the late 1800s and which are believed to be fragments of a single large comet that broke up several centuries ago.

By the way, as I write this, there is a coronal mass ejections (CME) – or expanding cloud of solar materials – headed toward the Earth, from a storm on the sun’s surface on January 19, 2012. It might affect satellites in orbit, and your cell phone service might be less than stellar today. It is a popular misconception is that sungrazing comets cause solar flares and CMEs. There is no connection between the two events. The sungrazer comets – in fact all comets – are tiny in contrast to the sun. Comet C/2011 N3, for one, is typical of the sungrazing comets. It is now known with certainty to be less than 100 meters across. Meanwhile, the sun is roughly 1,390,000,000 meters.

Bottom line: Scientists caught multiple images of Comet C/2011 N3 flying through the sun’s atmosphere and vaporizing and made a movie of it. The movie is the subject of a paper released yesterday (January 20, 2012) in the journal Science. It is said to be the first-ever showing a comet as it goes into the sun, and it let scientists pin down some details of the comet and its fiery demise.