Andy Weir’s book The Martian – soon to be released as a movie – begins with a huge dust storm that strands a fictional astronaut on Mars. Could it happen? 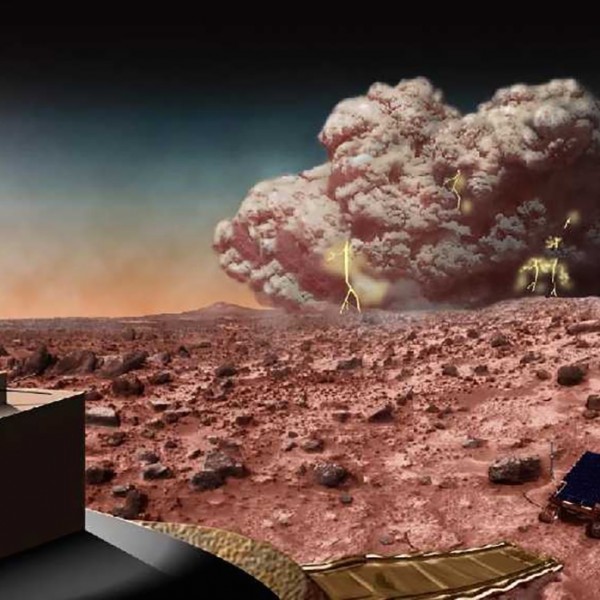 View larger. | Artist’s concept of a dust storm on Mars, via NASA.

Annual dust storms on Mars are real; observers on Earth peering through telescopes have been watching them for decades. Andy Weir’s science fiction book The Martian – soon to be released as a blockbuster movie – begins with a massive dust storm that strands fictional astronaut Mark Watney on Mars. I thoroughly enjoyed the Talks at Google video with Andy Weir, which you’ll find below. In it, Weir confesses to a crowd of Google employees that the basic premise of his book is, indeed, fictional: a dust storm on Mars would be unlikely to strand an astronaut.

In the video below, which is from 2014, Weir somewhat sheepishly (and very humorously) says:

I tried to make the book as accurate as I could. The biggest place that’s inaccurate – don’t tell anybody – but if you’re in a dust storm on Mars, you’re not even going to feel it. Mars’ atmosphere is less than one percent of Earth’s. So a 150-km/hour wind would feel like about a 1-km/hour wind does on Earth. It wouldn’t do any damage to anything. Shhh …

Most people don’t know how Martian dust storms work, that it’s not like being in a sandblaster. It’s just more dramatic that way. So I just made that concession. [shrugs and smiles] I know I’m a liar. I just … wanted that.

If you’ve read The Martian, or plan to see the movie, you’ll forgive Weir. It’s a masterful work of sci fi.

NASA released a story about dust storms on Mars – fact and fiction – today (September 21, 2015). The story said that beyond the annual yearly dust storms on Mars, which can cover continent-sized areas and last for weeks at a time, there are also more massive storms that occur more rarely but are much larger and more intense. NASA quoted Michael Smith, a planetary scientist at NASA’s Goddard Space Flight Center in Greenbelt, Maryland, as saying:

Once every three Mars years (about 5 ½ Earth years), on average, normal storms grow into planet-encircling dust storms, and we usually call those ‘global dust storms’ to distinguish them.

A global dust storm on Mars took place in the year 2001, and you can see the difference between Mars with no dust storm and Mars shrouded with dust in the Hubble Space Telescope image below: 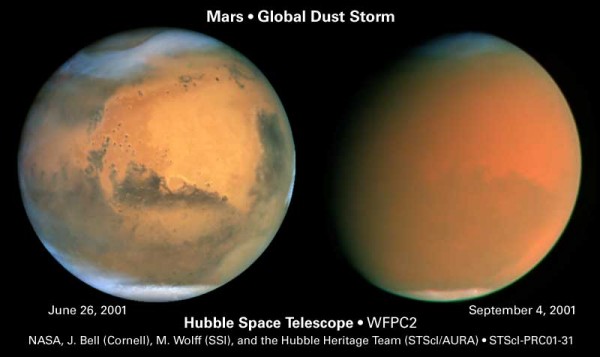 Despite this amazing real image of a Martian dust storm, though, NASA agrees with Weir in his Talk at Google that even the largest dust storms on Mars would be unlikely to strand an astronaut or rip apart major mechanical equipment. NASA said:

The atmosphere on Mars is about 1 percent as dense as Earth’s atmosphere. That means to fly a kite on Mars, the wind would need to blow much faster than on Earth to get the kite in the air.

There are at least two things, though, that Mars’ dust storms actually do, which Weir depicted in his book. Individual dust particles on Mars are small and slightly electrostatic, so they stick to the surfaces they contact. Smith said:

If you’ve seen pictures of Curiosity after driving, it’s just filthy. The dust coats everything and it’s gritty; it gets into mechanical things that move, like gears.

That’s why NASA engineers have to take Martian dust into account when they design equipment for Mars.

And another big impact of Martian dust is on solar panels. NASA said:

Even dust devils of only a few feet across — which are much smaller than traditional storms — can move enough dust to cover the equipment and decrease the amount of sunlight hitting the panels. Less sunlight means less energy created.

In The Martian, Watney spends part of every day sweeping dust off his solar panels to ensure maximum efficiency, which could represent a real challenge faced by future astronauts on Mars.

Global storms can also present a secondary issue, throwing enough dust into the atmosphere to reduce sunlight reaching the surface of Mars.

When faced with a larger dust storm in the book, Watney’s first hint is the decreased efficiency of his solar panels, caused by a slight darkening of the atmosphere. That’s a pretty accurate depiction of what large dust storms can do…

Bottom line: Andy Weir’s great science fiction book The Martian – soon to be released as a movie – has as its premise that a large Martian dust storm strands an astronaut on Mars. Martian dust storms would be unlikely to do that, but they do have consequences for spacecraft on Mars now, and for future Martian astronauts.

Watch the trailer for The Martian. It’s awesome!