As the New Horizons spacecraft speeds closer to its July flight through the Pluto system, we’re seeing an increasingly complex surface. Best views yet. 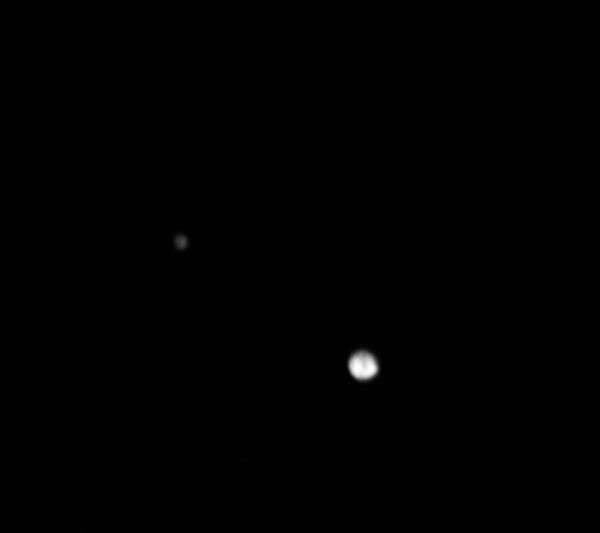 Charon and Pluto as seen on June 11, 2015 by New Horizons. The distance was 39.6 million km / 24.6 million miles. New Horizons is closing in on the Pluto system at a speed of more than a million kilometers per day. Image via Andrew R. Brown.

Pluto – once called the outpost planet because it was considered the most distant planet from our sun – hasn’t yet been seen close-up by any spacecraft. But the New Horizons spacecraft is now speeding toward this world, preparing to sweep past Pluto and its five known moons in July, 2015. The images on this page are the most recent released by NASA of Pluto. They are from New Horizons’ telescopic Long Range Reconnaissance Imager (LORRI), taken during May 29-June 11, and they show Pluto as a complex world with very bright and very dark terrain, and areas of intermediate brightness in between. These images offer the best views yet obtained of the Pluto system … but much-better views are coming soon!

Alan Stern, of the Southwest Research Institute, Boulder, Colorado is New Horizons Principal Investigator. Stern said in a statement from NASA on June 11, 2015:

Even though the latest images were made from more than 30 million miles away, they show an increasingly complex surface with clear evidence of discrete equatorial bright and dark regions—some that may also have variations in brightness.

We can also see that every face of Pluto is different and that Pluto’s northern hemisphere displays substantial dark terrains, though both Pluto’s darkest and its brightest known terrain units are just south of, or on, its equator. Why this is so is an emerging puzzle. 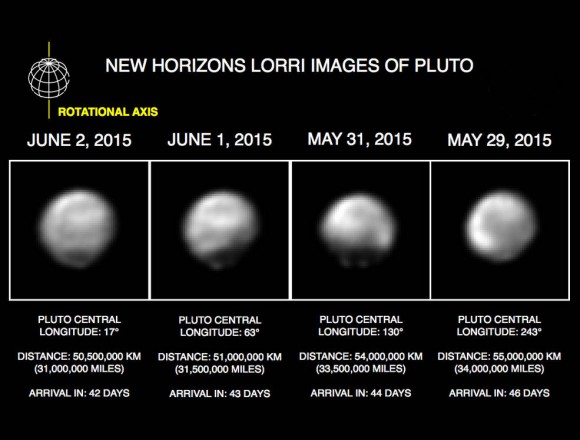 These images, taken by New Horizons’ Long Range Reconnaissance Imager (LORRI), show four different “faces” of Pluto as it rotates about its axis with a period of 6.4 days. All the images have been rotated to align Pluto’s rotational axis with the vertical direction (up-down) on the figure, as depicted schematically in the upper left.From left to right, the images were taken when Pluto’s central longitude was 17, 63, 130, and 243 degrees, respectively. Image credit: NASA/Johns Hopkins University Applied Physics Laboratory/Southwest Research Institute

New Horizons scientists used a technique called deconvolution to sharpen the raw, unprocessed pictures that the spacecraft beams back to Earth; the contrast in these latest images has also been stretched to bring out additional details. Deconvolution can occasionally produce artifacts, so the team will be carefully reviewing newer images taken from closer range to determine whether some of the tantalizing details seen in the images released today persist.

By the way, Pluto’s non-spherical appearance in these images is not real; it results from a combination of the image-processing technique and Pluto’s large variations in surface brightness.

Since April, deconvolved images from New Horizons have allowed the science team to identify a wide variety of broad surface markings across Pluto, including the bright area at one pole that scientists believe is a polar cap.

See the daily, raw images from New Horizons on this page

The images in the video above show dramatic variations in Pluto’s surface features as it rotates. When a very large, dark region near Pluto’s equator appears near the limb, it gives Pluto a distinctly, but false, non-spherical appearance. Pluto is known to be almost perfectly spherical from previous data. 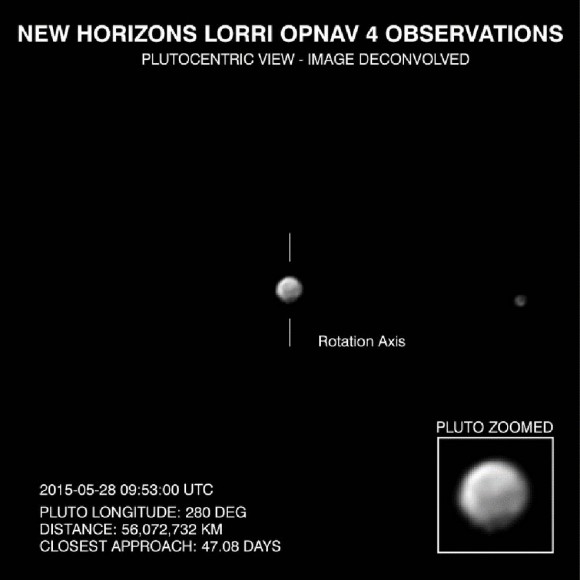 These images are displayed at four times the native LORRI image size, and have been processed using a method called deconvolution, which sharpens the original images to enhance features on Pluto. Deconvolution can occasionally introduce “false” details, so the finest details in these pictures will need to be confirmed by images taken from closer range in the next few weeks. All of the images are displayed using the same brightness scale. Imge credit: NASA/Johns Hopkins University Applied Physics Laboratory/Southwest Research Institute