New exoplanet system is ‘mirror image’ of Earth and sun

Researchers from Germany and the US have discovered an exoplanet less than twice the size of Earth orbiting at about the same distance from its star, making it the closest analog to the Earth-sun system known so far. 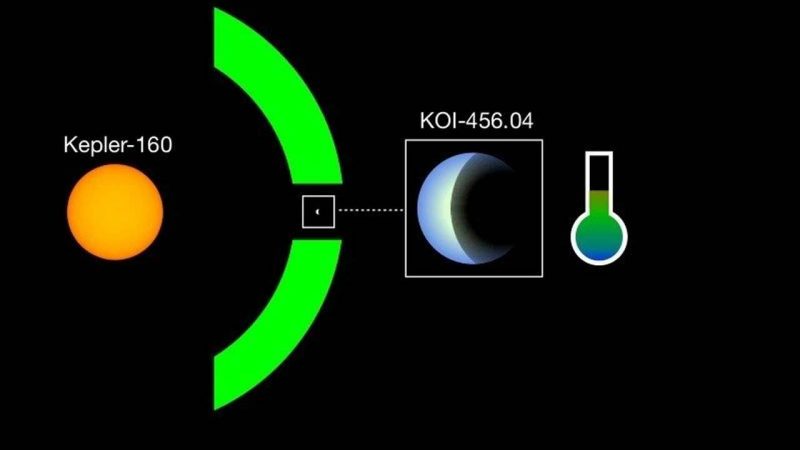 Diagram depicting how KOI-456.04 orbits in the habitable zone of its star, Kepler-160, at about the same distance Earth is from the sun. The planet, less than twice the size of Earth, therefore receives about the same amount of solar energy as Earth does. This is the closest Earth-sun analog discovered so far among exoplanets. Image via MPS/ René Heller.

The number of potentially habitable exoplanets keeps growing, as more and more worlds orbiting distant stars are discovered. So far, most of those planets have been found orbiting red dwarf stars, since they are dimmer, and planets are easier to detect around them (and also are the most common stars in our galaxy). But now, researchers at the Max Planck Institute for Solar System Research (MPS) in Göttingen, Germany, and others from the U.S., have announced that they have found a new exoworld, less than twice the size of Earth, which orbits a sunlike star, Kepler-160, just over 3,000 light-years from our solar system.

What makes this discovery of particular interest is that the planet appears to be orbiting its star at a similar distance as Earth’s from the sun, and receives almost the same amount of energy from its star as Earth does. This would make it the most similar to the Earth-sun system of any exoplanetary system discovered so far, almost a mirror image.

The peer-reviewed findings were published in Astronomy & Astrophysics, Vol. 638, id. A10 and submitted to arXiv on June 3, 2020. The research also includes scientists from the Sonneberg Observatory, the University of Göttingen, the University of California in Santa Cruz and NASA.

Fuller diagram showing how the KOI-456.04 system compares to that of Earth-sun, other stars from the Kepler mission and red dwarf stars. Image via MPS/ René Heller.

While the new planet – provisionally named KOI-456.04 – hasn’t been fully confirmed yet, the paper states that the probability of it being a real planet and not a false alarm is 85%. By far, most planetary candidates found do end up being confirmed later with more observations. From the paper:

The vespa software predicts that this signal has an astrophysical false-positive probability of FPP_3 = 1.8e-3 when the multiplicity of the system is taken into account. Kepler vetting diagnostics yield a multiple event statistic of MES = 10.7, which corresponds to an ~85 % reliability against false alarms due to instrumental artifacts such as rolling bands.

From what we know so far, it transits its star as seen from Earth. It is estimated to have a radius of 1.9 Earth radii, making it a super-Earth, and orbits its star in 378 days. Since the star is similar to our sun, the planet receives a similar amount of energy and radiation as Earth does, about 93%. This also means that the planet resides in a similar spot in the habitable zone around the star – where temperatures could allow liquid water to exist – as Earth does in the habitable zone around our sun. The lead author of the new study, René Heller, said in a statement:

KOI-456.01 is relatively large compared to many other planets that are considered potentially habitable. But it’s the combination of this less-than-double the size of the Earth planet and its solar type host star that make it so special and familiar. 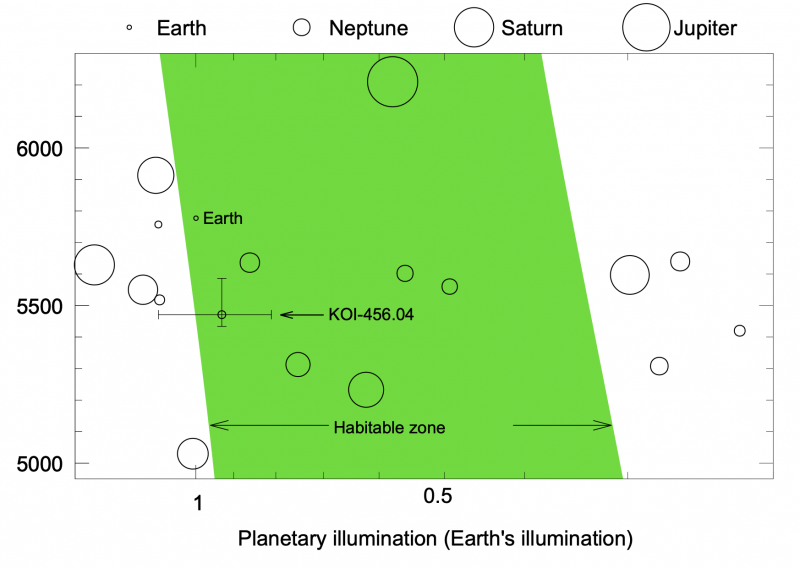 Comparison of the amount of planetary illumination – solar energy – that KOI-456.04 receives from its star as compared to Earth and the sun. Image via René Heller et al./ Astronomy & Astrophysics/ arXiv.

If KOI-456.01’s atmosphere isn’t too dense or non-Earth-like, then there’s a good chance it could have similar surface conditions to Earth. The researchers calculated that if the planet’s atmosphere is moderate, like Earth’s, then the average temperature should be about 41 degrees Fahrenheit (5 degrees Celsius). Not too bad! There are, of course, still a lot of unknowns, such as the composition of the atmosphere and the planet itself and whether there is any surface water.

Kepler-160 was already known to have at least two planets, Kepler-160 b and Kepler-160 c. KOI-456.04, would be the newest, and it turns out there may actually be four planets in total. Heller said:

Our analysis suggests that Kepler-160 is orbited not by two but by a total of four planets.

The other two already known planets, Kepler-160 b and Kepler-160 c, are both larger than Earth and orbit much closer to the star. This makes them a lot less likely to be habitable. Kepler-160 c has an oddly distorted orbit, leading some scientists to theorize that another third planet, Kepler-160 d, was waiting to be discovered. Heller and his colleagues found evidence for its existence indirectly, since it doesn’t transit in front of the star as seen from Earth.

Heller and his co-author, Michael Hippke, developed a new technique for searching for exoplanets in old data from the Kepler Space Telescope (the mission ended in 2017). They decided to use a detailed physical model of stellar brightness variation instead of just looking for a step-like jump-to-dimming and then jump-back-to-normal brightness pattern in stellar light curves, as had been done previously for almost two decades. Heller explained:

Our improvement is particularly important in the search for small, Earth-sized planets. The planetary signal is so faint that it’s almost entirely hidden in the noise of the data. Our new search mask is slightly better in separating a true exoplanetary signal from the noise in the critical cases. 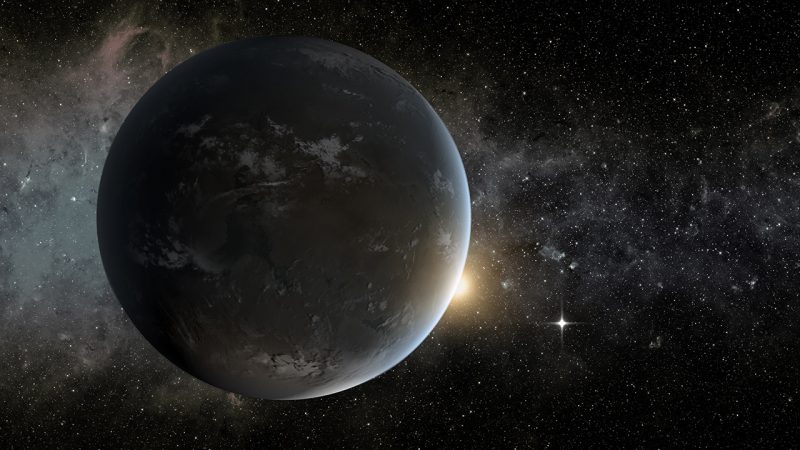 Artist’s concept of Kepler-160b, another world in the Kepler-160 system. It has a radius about 1.54 times that of Earth, but orbits very close to the star, making it unlikely to be habitable. Image via NASA.

If KOI-456.01 is any indication, then the process seems to be working. Heller and his colleagues had also been able to find 18 other new exoplanets, so far, in the old Kepler data.

Kepler-160 was observed continuously by Kepler from 2009 to 2013. It is very similar to our sun, with a radius of 1.1 solar radii, a surface temperature of 9,392 degrees Fahrenheit (5200 degrees Celsius, only 300 degrees C less than the sun), and a sun-like stellar luminosity.

While KOI-456.01 is still regarded as a planetary candidate, the odds are very good that it is the real deal. But of course, scientists want to know for certain, and it’s possible that one of the more powerful ground-based telescopes will be able to fully confirm it, since it transits its star and is therefore easier to detect than with some other planet-hunting methods. Also, the European Space Agency’s (ESA’s) upcoming PLATO space telescope will be able to do that as well. One of PLATO’s primary goals is to search for Earth-sized exoplanets around sun-like stars, and is scheduled to launch in 2026. PLATO would be able to study KOI-456.01 a bit more closely, and, hopefully, reveal more about what this tantalizing world is really like.

Although red dwarfs are the most common type of star, the discovery of KOI-456.01 bodes well for the possibility that many rocky worlds like Earth also orbit sun-like stars. That in turn increases the chances of eventually finding habitable exoworlds around stars just like our own sun.

Bottom line: Researchers have discovered a new exoplanet orbiting the sun-like star Kepler-160. It is less than twice the size of Earth and orbits at about the same distance as Earth does from the sun.

Source: Transit least-squares survey — III. A 1.9 R+ transit candidate in the habitable zone of Kepler-160 and a nontransiting planet characterized by transit-timing variations