Exoplanet has ruby and sapphire winds

The planet is so hot that these minerals would be vaporized. The clouds themselves would be visually stunning, these researchers said. 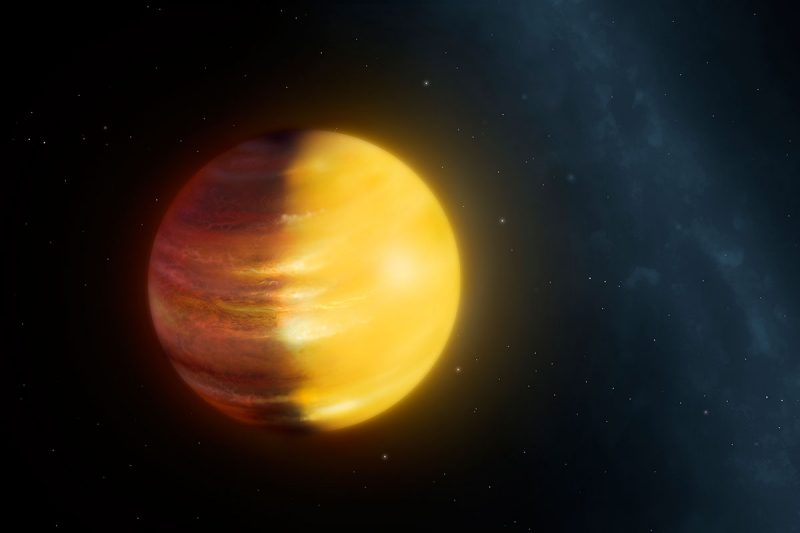 It’s exciting that studies of exoplanets – distant planets orbiting other suns – are becoming so much more detailed. Today (December 12, 2016), astronomers at University of Warwick in Coventry, England announced they’ve detected evidence of powerful changing winds sweeping across giant exoplanet HAT-P-7b, a world 40% larger than Jupiter, orbiting a star 50% more massive than our sun, some 1,040 light-years away. They say theirs is the first-ever weather report on a gas giant outside our solar system. And what weather! They report the planet’s clouds could be made of vaporized corundum, the mineral that forms rubies and sapphires. If only we could view these clouds, they said, they might be:

And think of the hail! David Armstrong of Warwick’s Astrophysics Group led the research. He said the strong winds moving across HAT-P-7b likely lead to catastrophic storms.

This research was published on December 12, 2016 in the peer-reviewed journal Nature Astronomy.

Jupiter – our solar system’s largest planet – compared in size to giant exoplanet HAT-P-7b. The planet’s clouds contain vaporized minerals of the sort form rubies and sapphires. If we could see it … what would it look like? Image via Wikimedia Commons.

Armstrong and his colleagues conducted this research using data from NASA’s planet-finding Kepler satellite. They were able to monitor light being reflected from the atmosphere of HAT-P-7b. This exoworld is so close to its star that its dayside is a searing 3,500 degrees Fahrenheit (1,927 degrees C). Armstrong and colleagues identified changes in the light reflected from the planet, and they showed that the brightest area on the planet shifts its position. This, they say is due to changes in cloud cover around this world, specifically an equatorial jet with:

… dramatically variable wind-speeds, at their fastest pushing vast amounts of cloud across the planet.

Armstrong commented in a statement:

HAT-P-7b is a tidally locked planet, with the same side always facing its star. We expect clouds to form on the cold night side of the planet, but they would evaporate quickly on the hot dayside.

These results show that strong winds circle the planet, transporting clouds from the night side to the dayside. The winds change speed dramatically, leading to huge cloud formations building up then dying away.

These researchers expect this research to lead to more studies of this kind, as astrophysicists begin to explore the weather on planets beyond our solar system.

Bottom line: Giant exoplanet HAT-P-7b has clouds made of the mineral that forms rubies and sapphires!