Jumbo exoplanet discovered in double system with a dead star

The giant exoplanet – 13 times more massive than Jupiter – is the first yet found that orbits a binary star system in which 1 of the 2 stars is dead. 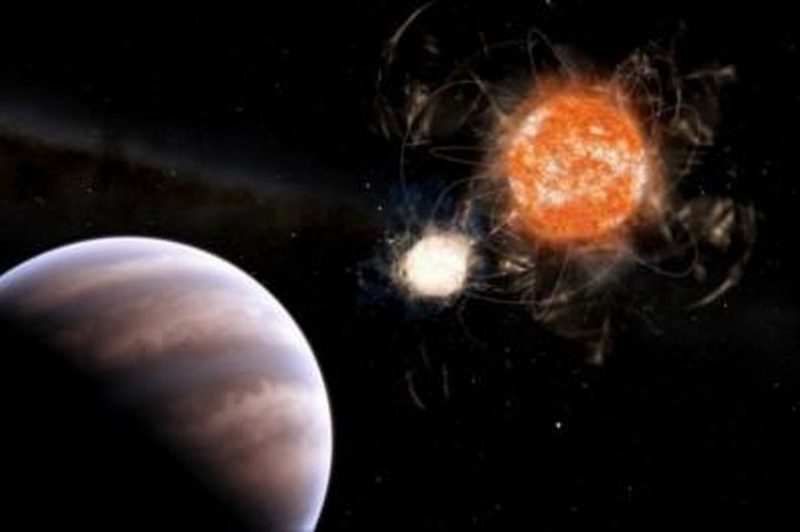 Artist’s concept of the exoplanet. Image via Leandro Almeida.

Brazilian researchers have identified signs of the existence of a giant exoplanet – 13 times more massive than Jupiter – orbiting a binary star system with one live star and one white dwarf. The exoplanet – a planet outside our solar system – is the first yet found that orbits an older binary in which one of the two stars is dead.

Leonardo Andrade de Almeida, of Federal University of Rio Grande do Norte, is first author of the study, published March 22, 2019, in the Astronomical Journal. He said in a statement:

We succeeded in obtaining pretty solid evidence of the existence of a giant exoplanet with a mass almost 13 times that of Jupiter [the largest planet in the solar system] in an evolved [or older] binary system. This is the first confirmation of an exoplanet in a system of this kind.

What is a binary star system? Here’s a nice explanation from Forbes:

The most common kind of star systems in our Milky Way galaxy are multiple stars systems, where two or more stars orbit each other, or rather, they orbit a common center of mass. Perhaps up to 85 percent of stars are in binary systems, including famous ‘stars’ Sirius, Spica, Rigel, and Alpha Centauri. Binary stars are gravitationally bound to each other, so not to be confused with ‘double stars,’ which usually refer to stars that optically appear very close to each other line-of-sight in binoculars or a telescope, but may be in completely different star systems.

In the past three decades, 4,001 exoplanets have been discovered (as of March 12, 2019) orbiting isolated stars outside the solar system. Theoretically, astronomers say, our Milky Way galaxy might contain billions of exoplanets. We now know that even the closest stars to our sun – including Proxima Centauri, at 4.3 light-years, and Barnard’s Star, located at just 5.98 light-years away – are orbited by planets.

The binary star system that’s home to the newly-discovered exoplanet – called KIC 10544976 – is located in the constellation Cygnus The Swan in our Milky Way galaxy. KIC 10544976 contains a white dwarf star (a dead, dense low-mass star with high surface temperature) and a red dwarf star (an active star with a small mass compared to the sun) that orbit each other in rapidly every .35 days (about eight hours).

Clues that helped the researchers discover the exoplanet in the KIC 10544976 evolved binary star system, located in the Cygnus constellation, included variations in eclipse timing (the time taken for each of the two stars to eclipse the other) and orbital period. Almeida said:

Variations in the orbital period of a binary are due to gravitational attraction among the three objects, which orbit around a common center of mass.

Scientists don’t know how the jumbo planet was formed. One hypothesis is that it developed at the same time as the two stars billions of years ago. Another is that it formed out of the gas ejected during the death of the white dwarf.

Bottom line: Brazilian astronomers have found evidence of a giant exoplanet – 13 times more massive than Jupiter – orbiting an older binary system in which one of the two stars is dead.