New evidence for life in a Martian meteorite?

The discovery of fossilized microbes in Martian meteorites has been claimed before. Now scientists in Hungary add a new study of the ALH-77005 meteorite, with some intriguing new evidence. 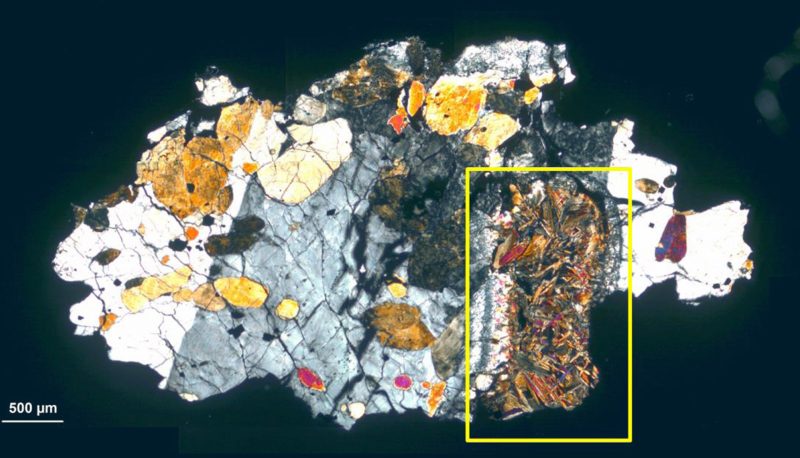 Thin slice of the martian meteorite ALH-77005. The melt pocket region, inside the rectangle is where scientists found evidence for microbial mediation. Image via Gyollai et al.

Has there ever been life on Mars? We are still awaiting a definitive answer to that long-standing question, although evidence has continued to build that there may indeed have been little critters – albeit most likely microscopic – in or below those distant red sands. Such a discovery would have profound implications for the search for life elsewhere in the solar system and on exoplanets orbiting other stars. Now, a research team in Hungary has found another tantalizing clue – mineralized and filament-like organic material embedded in a Martian meteorite – ALH-77005 – from the Allan Hills region of Antarctica. The material in the meteorite is similar to that produced by iron-oxidizing microbes on Earth.

The peer-reviewed findings were published online in the journal Open Astronomy on March 28, 2019. According to lead author Ildiko Gyollai from HAS Research Centre for Astronomy and Earth Sciences in Budapest:

Our work is important to a broad audience because it integrates planetary, Earth, biological, chemical and environmental sciences and will be of interest to many researchers in those fields. The research will also be of interest to planetologists, experts of meteorite and astrobiology as well as researchers of the origin of life, and to the general public since it offers an example of a novel aspect of microbial mediation in stone meteorites. 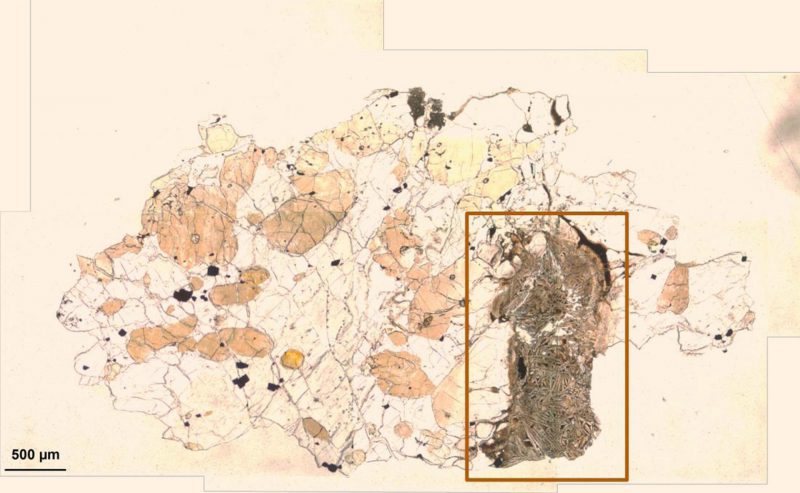 Another view of the same thin slice from the meteorite in polarized light. Image via Gyollai et al.

The Japanese National Institute of Polar Research mission (1977-1978) discovered the ALH-77005 meteorite in the Allan Hills in Antarctica in 1977. The meteorite is estimated to be 175 million years old. It is a shergottite meteorite – composed of igneous rock – named after the Shergotty meteorite, which fell at Sherghati, India (formerly spelled Shergotty), in 1865. About three-quarters of all known Martian meteorites are shergottites.

How do we know these meteorites came from Mars? Like other Martian meteorites, ALH-77005 is known to have originated on Mars because it has a composition similar to rocks and atmosphere gases analyzed by Mars spacecraft. The Curiosity rover confirmed the connection between Mars itself and these meteorites found on Earth in October 2013, after the rover analyzed argon in Mars’ atmosphere. The argon was found to be the same as argon traces in the meteorites.

For this new study, the researchers took a very thin section sample of the meteorite and studied it using optical microscopy for microtextures – microscopic texture patterns – and FTIR-ATR microscopy. What they found is intriguing. They found embedded spherical and thread-like structures, material that represent possible biosignatures, that is, the mineralized remains of ancient microbes and their alteration of minerals in the rock. The possible biosignatures are found next to opaque minerals and inside shock melt pockets, which are the result of shock and fracturing during the meteorite’s encounter with Earth. As also noted by the paper:

The other signatures for biogenicity of ALH-77005 are strong negative delta-c-13, enrichment of iron, manganese, phosphorus and zinc in shock melt support scenario.

Our study proposes the presence of microbial mediation on Mars.

Overall, the highlighted findings from ALH-77005 as listed in the paper include:

– Possible filamentous iron-oxidizing bacteria found in shock melt pocket of shergottite.
– Possible biosignatures determined by optical microscopy and by FTIR-ATR.
– Bioessential elements and carbon isotope data.
– Comparison of similar results of Mezö-Madaras, Mócs, Knyahinya, all of which suggest biogenicity on Mars, according to these authors. 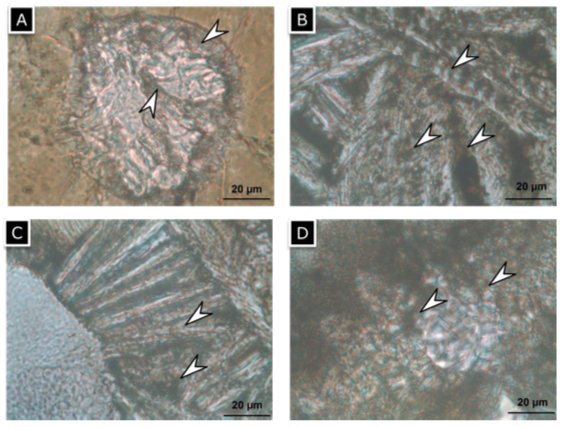 This isn’t the first time that possible evidence for life has been found, or at least claimed, in Martian meteorites. One prime example – in 1996, a team of scientists led by David S. McKay announced the discovery of tentative bacteria-like microbial fossils in another meteorite from Allan Hills – ALH-84001. It was widely reported, and President Clinton gave a speech about it at the time. Further studies by other scientists turned against the life interpretation, however, as possible non-biological explanations had been found for the formation of the microscopic rod-like features.

Similar abiotic (non-life related) features were created in the laboratory, although McKay insisted that those results were obtained using unrealistically pure raw materials as a starting point and do not explain many of the features found in ALH-84001. In 2010, another team of scientists, including McKay, said that they had found three times the original amount of fossil-like data, including more biomorphs (suspected fossils) inside two additional Martian meteorites, and more evidence at other spots in the Allan Hills meteorite itself.

The curious mineral formations in ALH-77005 now join a growing list of tentative evidence for ancient life on Mars. If they can be confirmed, it would be one of the most exciting discoveries in planetary science, and in human history.

Some of the bacteria-like rod-shaped objects found in the ALH-84001 Martian meteorite as seen by a scanning electron microscope, announced in 1996. Image via McKay et al/Lunar and Planetary Institute.

Bottom line: Whether these new results from Hungary hold up to additional scrutiny remains to be seen, but they are certainly intriguing, and may help to bolster previously announced findings of microbial fossils in Martian meteorites.