This white dwarf star has a giant, evaporating planet

White dwarf stars are typically more or less Earth-sized. The planet orbiting white dwarf WDJ0914+1914 appears to be at least twice as big as its star! High intensity radiation from its star is causing this planet to evaporate. Will the same thing happen in our solar system someday? 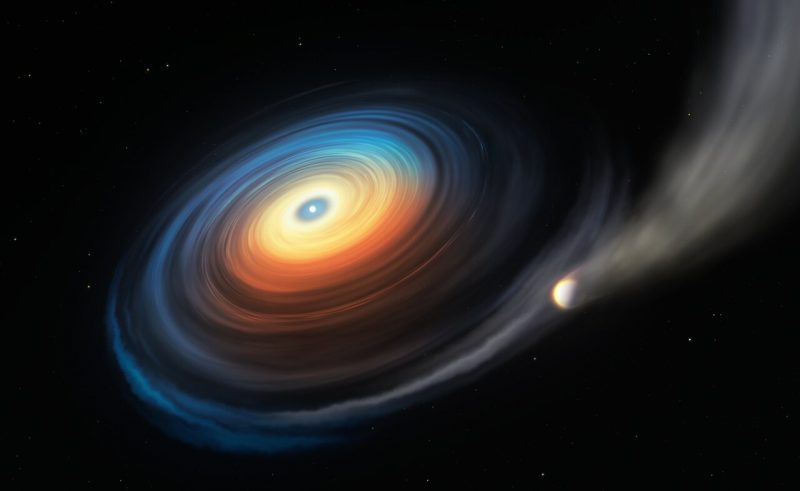 Artist’s concept of the white dwarf star WDJ0914+1914 and its Neptune-like exoplanet. Since the planet orbits very close to the hot white dwarf, the star’s extreme ultraviolet radiation strips away the planet’s atmosphere. Most of this stripped gas escapes into space, but some of it swirls into a disk, accreting onto the white dwarf itself. Image via ESO/M. Kornmesser.

Giant planets – like Jupiter, Saturn, Uranus or Neptune in our own solar system – have been found orbiting many distant stars, including sunlike stars and red dwarfs. But no giant exoplanet had been detected around a white dwarf star, until now. Astronomers say they discovered this giant exoplanet, which orbits the white dwarf WDJ0914+1914, using the European Southern Observatory’s Very Large Telescope in Chile. What’s more, they say, this giant planet is evaporating.

The new peer-reviewed results were published on December 4, 2019, in the journal Nature.

Astronomers have found smaller rocky worlds orbiting white dwarfs before, but this is the first-ever discovery of a giant exoplanet orbiting a white dwarf star. White dwarfs are, as the name implies, small, typically only slightly bigger than Earth. This planet is thought to be at least twice as big as its star! It orbits its star in only about 10 Earth-days. Astronomers knew something strange was happening with the star when they noticed it dimming a bit, as though something were passing in front of it. Boris Gänsicke of the University of Warwick led the study. He said:

It was one of those chance discoveries. We knew that there had to be something exceptional going on in this system, and speculated that it may be related to some type of planetary remnant. 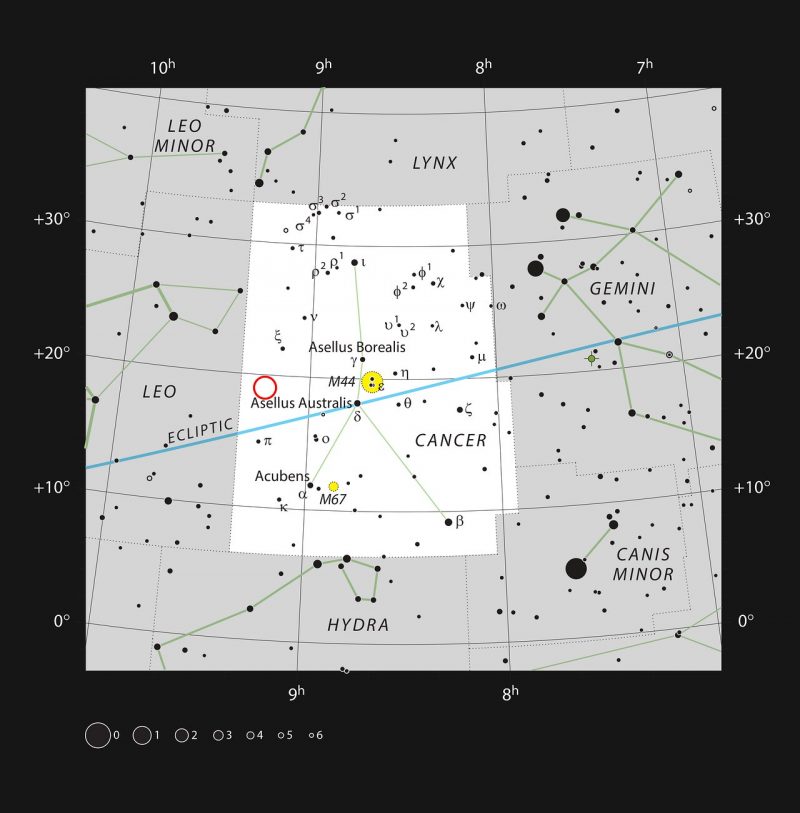 This chart shows the location of WDJ0914+1914 in the constellation Cancer (in red circle). Image via ESO/IAU/Sky & Telescope.

He was thinking in terms of a remnant, because white dwarfs are evolved stars. They’ve passed through their time on the main sequence (where our sun is now), ballooned up into red giants, then sloughed off their outer layers, leaving the white dwarf, essentially a compact stellar core, behind.

These researchers used the Sloan Digital Sky Survey to peer at 7,000 white dwarf stars before finding one – WDJ0914+1914 – that showed evidence of harboring a giant planet. This white dwarf is 1,500 light-years away in the direction of the constellation Cancer the Crab.

The team not only found evidence that the planet exists, but also that it’s evaporating. This conclusion came after the discovery of hydrogen, oxygen and sulfur in the vicinity of the white dwarf. These elements weren’t in the star itself, these astronomers explained, but rather in a disk of gas surrounding the star. Material in the disk appears to be swirling into the star. According to study co-author Matthias Schreiber of the University of Valparaiso in Chile:

It took a few weeks of very hard thinking to figure out that the only way to make such a disk is the evaporation of a giant planet.

Why would the planet be evaporating? Because, although the white dwarf is very small, it is still extremely hot, about 50,432 degrees Fahrenheit (28,000 degrees Celsius). 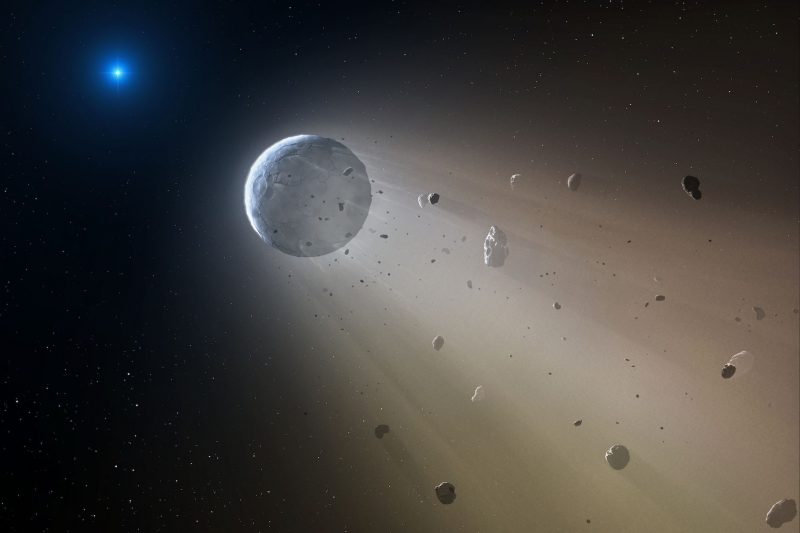 Artist’s concept of a planet – in this case the 1st planet – discovered orbiting a white dwarf star. That was in 2015. The planet orbits the white dwarf WD1145+017. Both this planet – and the giant planet found this year – are thought to be disintegrating. Image via The Verge/Mark Garlick.

According to these researchers, the planet probably started out similar to Uranus or Neptune, ice giant worlds in our own solar system. The planet orbiting white dwarf WDJ0914+1914 appears to have quantities of hydrogen, oxygen and sulfur similar to what’s found in the deep atmospheres of Uranus and Neptune. If it were orbiting close to a white dwarf, an ice giant like Uranus or Neptune would have the outer layers of its atmosphere stripped away by ultraviolet radiation. The gases would form a disk around the star and start to swirl into the star itself. As one of the researchers – Odette Toloza from the University of Warwick – noted:

This is the first time we can measure the amounts of gases like oxygen and sulphur in the disk, which provides clues to the composition of exoplanet atmospheres.

What’s more, according to these researchers’ study, there may be other planets orbiting WDJ0914+1914:

The orbit of the planet is most likely the result of gravitational interactions, indicating the presence of additional planets in the system.

In 2015, the Kepler Space Telescope discovered the first planet orbiting another white dwarf star, called WD1145+017. Similar to the newly discovered giant planet, this smaller, rocky world is disintegrating. That white dwarf is 570 light-years away in the direction of the constellation Virgo. This article by Loren Grush in The Verge gives a good overview of that discovery.

About 5 billion years from now, our own sun will burn up all the hydrogen in its core and expand into a red giant, swallowing up the inner planets, including Earth. Then, after the red giant loses its outer layers, all that will remain is the burnt-out core, a white dwarf. Image via Encyclopedia Britannica.

Clearly, this new finding – a giant planet orbiting a white dwarf – parallels the future fate of our own solar system. In fact, Gänsicke added:

The discovery … opens up a new window into the final fate of planetary systems.

That is, our sun will itself one day become a white dwarf, after it burns up all the hydrogen in its core. About 5 billion years from now, the sun will expand into a red giant, swallowing up the inner planets, including Earth. After the red giant sun loses its outer layers, all that remains will be the burnt-out core: a white dwarf where our sun used to be. Do the outer gas and ice giants in our solar system await a similar fate as the giant planet around WDJ0914+1914? As Gänsicke concluded:

Until recently, very few astronomers paused to ponder the fate of planets orbiting dying stars. This discovery of a planet orbiting closely around a burnt-out stellar core forcefully demonstrates that the universe is time and again challenging our minds to step beyond our established ideas.

Bottom line: For the first time, astronomers have discovered a giant planet orbiting a white dwarf star, and it seems to be evaporating.

Source: Accretion of a giant planet onto a white dwarf