Cracks in Europa’s surface indicate the moon’s outer ice shell has shifted by as much as 70 degrees over the past several million years. It’s the kind of movement you’d expect from a planetary crust floating on a subsurface ocean. 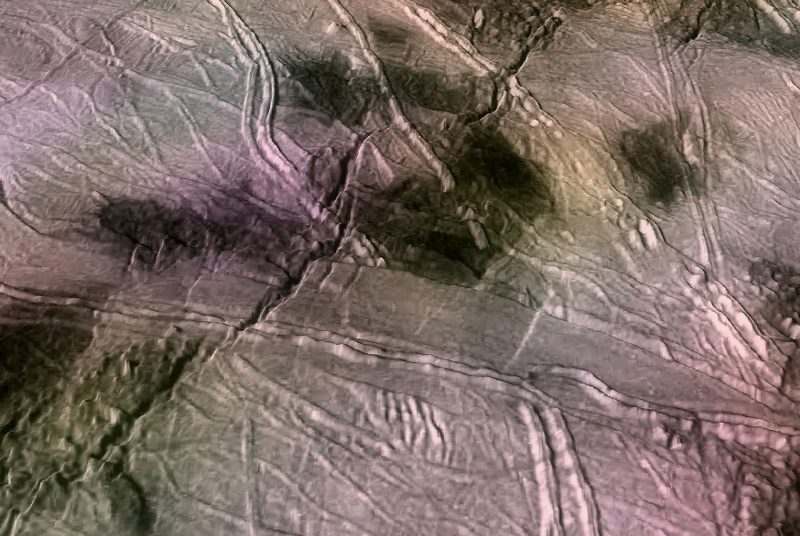 Jupiter’s ocean moon Europa looks a bit like a round cracked egg, with its smooth outer ice crust covered in brownish-stained fissures. Those cracks in Europa’s ice shell record the history of its surface and past geological activity. Now, researchers have announced a new study that’s provided more clues as to how the moon’s surface has changed over the last several million years. Its major finding: Europa’s poles are no longer where they used to be. As a whole, the Jovian moon’s icy shell has shifted and reoriented itself by as much as 70 degrees, close to a quarter of the way around a complete circle. This reorientation of the outer ice shell is called true polar wander. The researchers say such a shift would be expected of a world whose outer crust lies above a hidden, subsurface ocean.

The conclusion helps confirm earlier hints of shifts in Europa’s crust. The new work is based on an analysis of global-scale circular patterns in Europa’s surface ice. This massive crustal shift is thought to be one of the most recent major geologic events to have occurred on Europa’s young surface.

The intriguing peer-reviewed findings were published on July 29, 2020, in Geophysical Research Letters. The research comes from the Universities Space Research Association – based in Columbia, Maryland – and the Lunar and Planetary Institute in Houston.

As explained in the paper:

The large icy ocean world of Europa has a very young surface that has been highly deformed. Recent evidence for ‘polar wander,’ or reorientation of the floating outer ice shell away from its original orientation, has been confirmed by the recognition that long fissures are part of the polar wander tectonic pattern and are among the youngest features on the planet. This means that polar wander occurred very recently and that older features are no longer in their original locations and will require a complete reassessment of Europa’s tectonic history. 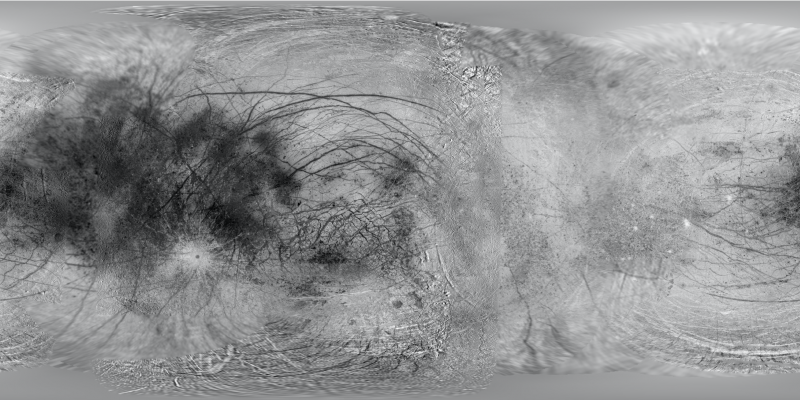 The results have implications not only for Europa’s surface, but also its subsurface ocean. They help confirm the existence of the ocean, already known by other data from years of observations, since the only way the ice shell could reorient itself so dramatically would be if it were uncoupled – freely floating and separated – from the moon’s rocky core by a deep layer of water. As Paul Schenk, lead author of the new paper, said in a statement:

Our key finding is that the fractures associated with true polar wander on Europa cross-cut all terrains. This means that the true polar wander event is very young and that the ice shell and all features formed on it have moved more than 70 degrees of latitude from where they first formed. If true, then the entire recorded history of tectonics on Europa should be reevaluated.

How did the researchers determine that Europa’s ice crust moved so much?

They used a combination of global maps and detailed topographic data from the old Galileo mission to Jupiter in the 1990s and the Voyager missions, which swept past Jupiter in the 1980s. From those early missions, researchers from the Lunar and Planetary Institute, the University of California at Santa Cruz and the University of Arizona were able to correlate some of the large cracks in Europa’s surface with the concentric circular depressions. The global maps have a detailed resolution of about 600 feet (200 meters) per pixel. They revealed that the fractures were part of the other circular patterns caused by the true polar wander process. 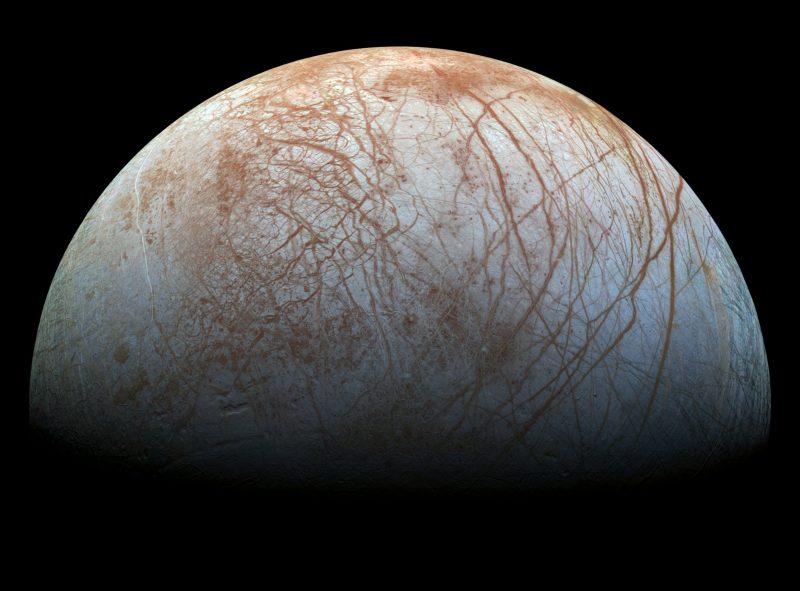 Jupiter’s ocean moon Europa as seen by the Galileo spacecraft. This image is a combination of images from 1995 and 1998. Image via NASA/ JPL-Caltech/ SETI Institute. 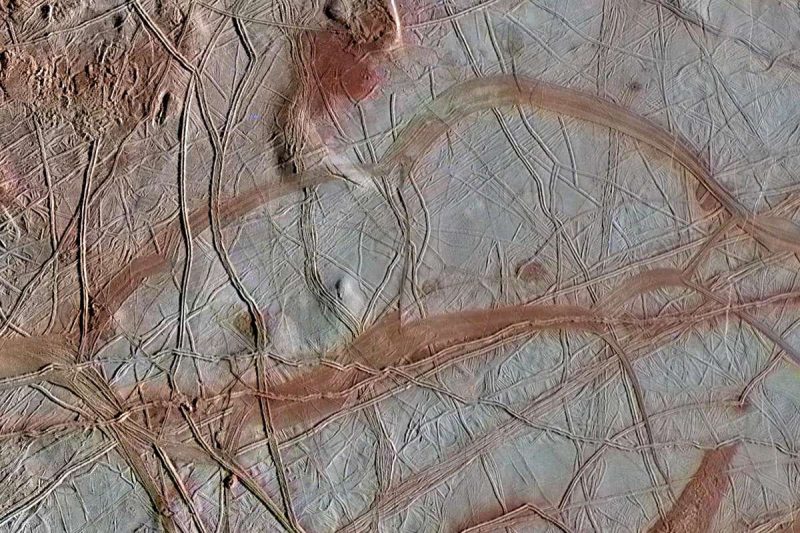 A closer look at some of the cracks in Europa’s otherwise smooth surface. Image via NASA/ JPL-Caltech/ SETI Institute.

When the fractures were viewed at highest resolution – about 130 feet (40 meters) per pixel – they were found to be more than 600 feet (200 meters) deep. These huge cracks are like massive wounds on Europa’s surface, cutting through various types of terrain. By studying these fractures, the researchers could tell that the reorientation of the surface ice was one of the last major geological events to occur on Europa’s surface.

The researchers also say that there is evidence that Europa’s ice crust thickened over time. According to co-investigator Francis Nimmo at the University of California at Santa Cruz:

Another important aspect of this work is that it makes predictions for additional features and ice shell properties which can be tested when the planned Europa Clipper spacecraft starts observing Europa.

Co-investigator Isamu Matsuyama at the University of Arizona added: 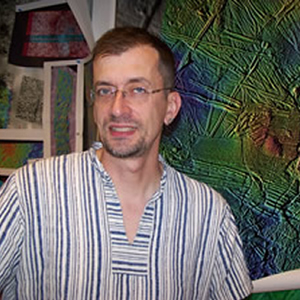 Paul Schenk of the Universities Space Research Association and Lunar and Planetary Institute. He led the new research on Europa. Image via LPI.

Europa Clipper is expected to be launched to Europa in the early 2020s. It will complete the global map of Europa, including high-resolution images and even soundings of these features. These maps will help determine the absolute age of the fractures and depressions and other consequences of the true polar wander event that originally created them.

Last June, NASA scientists announced at the Goldschmidt conference that Europa’s subsurface ocean is likely quite habitable, by earthly standards. The study found that Europa’s ocean would have been mildly acidic at first, with high concentrations of carbon dioxide, calcium and sulfate. But over time, it became chloride-rich, resembling oceans on Earth (seawater on Earth contains 1.94% chloride).

Bottom line: Researchers have found that Europa’s outer ice shell has shifted and reoriented itself by as much as 70 degrees over the past several million years.

Via Lunar and Planetary Institute