Where is Elon Musk’s car going?

It was meant to go into an orbit that would take it past Mars, but where’s it going really? Plus, see outer space from the vantage point of Starman, the mannequin in Elon Musk’s red Tesla Roadster, and much more.

Last Tuesday (February 6, 2018), SpaceX’s Falcon Heavy successfully lifted off from Launch Complex 39A at Kennedy Space Center in Florida. Falcon Heavy is now the world’s most powerful operational rocket by a factor of two, providing a heavy-lift capability not seen since the Apollo era in the late 1960s and early ’70s, when mighty Saturn V rockets lifted astronauts to the moon. Falcon Heavy’s launch last Tuesday was a test flight, its maiden voyage, meant to prove the concept of the rocket itself (which is in essence three of SpaceX’s Falcon 9 rockets joined together). It definitely did! But SpaceX founder and CEO Elon Musk, as always, went further. He and his team placed Musk’s 2008 Tesla Roadster at the top of the rocket, with the goal of blasting it into an elliptical orbit between Earth and Mars. The orbit would, at times, bring the car – with its passenger, a mannequin nicknamed Starman, dressed for space – near Mars.

The Falcon Heavy rocket test was a major success and a thrill for space fans. After livestreaming views from StarMan’s vantage point in Earth orbit (see video above), SpaceX reignited the upper stage’s engine one last time, giving the Tesla a push beyond Earth’s orbit.

So … was the car bound for Mars? 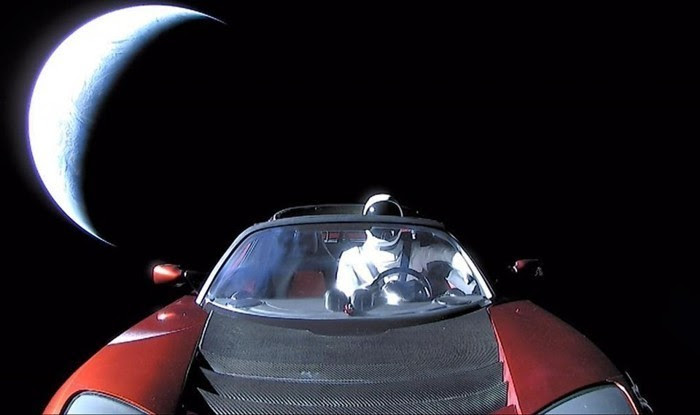 A camera mounted ahead caught this image of Starman, in Elon Musk’s red Tesla Roadster, as car and mannequin left Earth behind. Calculations by astronomers in the days after the launch suggest the payload reached a speed of 20.8 miles per second (33.5 km/sec) after the last burn, a faster speed than expected. Image via SpaceX.

Throughout the day on Tuesday, Musk had been tweeting updates on the Falcon Heavy launch. At the end of the day, unexpectedly, he tweeted this:

As Musk said in the tweet above, the burn did indeed push the car and its passenger farther than expected. But was it really now headed for the asteroid belt? In a great article in The Atlantic on February 8, Marina Koren brings together information from astronomers, who were also talking on Twitter on launch day, following Musk and checking his facts.

CfA astronomer Jonathan McDowell (@planet4589 on Twitter), also an inveterate tweeter (like Musk), was one of those trying to calculate the Roadster’s correct orbit. He tweeted on Wednesday:

Elon is still talking about the Starman going to the asteroid belt. But I’m not convinced yet …

As reported by Koren, the astronomers also used independent observations made by Rob McNaught, an Australian asteroid observer, which were posted online. Koren wrote:

So, based on the corrected numbers, the car actually won’t make it as far as the asteroid belt, as Musk claimed in his tweet.

According to the revised data … it will take the Tesla about 18.8 months to complete one trip around the sun. This means that the car will reach its farthest distance from Earth in about half that time. The Tesla will cross the orbit of Mars twice per orbit, so Musk is still fulfilling his wish to send his Tesla ‘to’ Mars — it’ll just take a little longer between visits.

Granted, crossing Mars’ orbit is not the same thing as going “to” Mars, but it’s still pretty cool. What’s more, the Tesla won’t take that long to cross Mars’ orbit. Click into Jonathan McDowell’s tweet, below, and read some of the comments, for a good discussion.

In the meantime, astronomers on Earth, of course, were seeking out the Tesla Roadster with their telescopes, in the days after it left Earth behind. Gianluca Masi of the Virtual Telescope Project in Rome emailed the image below to EarthSky, saying:

Here it is the Tesla Roadster, just imaged from Arizona, as part of the joint program involving the Virtual Telescope Project and Tenagra Observatories.

In fact, Virtual Telescope might still be engaged in its livestream of the Roadster as you read this article. The event was – titled Tesla Roadster Crossing the Sky – is scheduled for February 10, 2018, starting at 12 UTC (6 a.m. CST); translate UTC to your time). 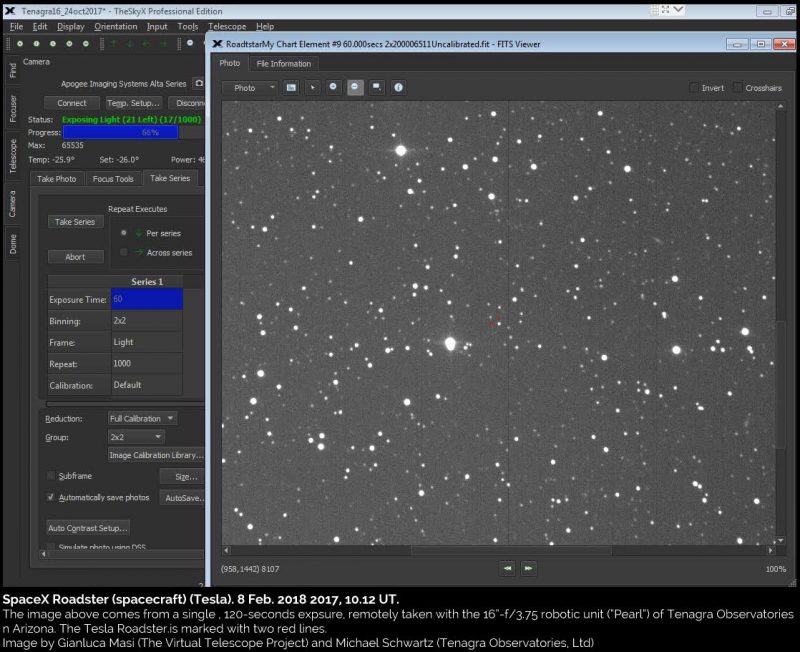 View larger. | Gianluca Masi and Michael Schwartz say the dot between the tickmarks is an image of the Tesla Roadster in space, acquired from Arizona on February 8, 2018.

Now, before you go, check out the video below. It’s an animation of where Musk’s car was supposed to go – how it was all supposed to work, and, for the most part, did work – on launch day. My four-year-old grandson and I watched it multiple times last week, and he was mightily impressed.

Bottom line: At last week’s awesome Falcon Heavy launch, Elon Musk’s red Tesla Roadster was meant to go into an orbit that would take it past Mars. At the last minute, Musk said the car overshot and was going to the asteroid belt. Where’s it really going?