Posted by Laura Dattaro and Deborah Byrd in Space | August 18, 2011

Earth’s moon was thought to be 4.57 billion years old, but a detailed analysis of lunar rock indicates it might be as much as 200 million years younger.

Scientists thought the Earth and moon were approximately the same age, about 4.57 billion years old. But a new analysis of lunar rock samples suggests that Earth’s moon is 200 million years younger than the previous estimate. The finding could lead to changes in our understanding of how and when the moon – and Earth – formed. The scientists announced their findings online on August 17, 2011 in the journal Nature.

Lars Borg, a planetary geologist at the Lawrence Livermore National Laboratory, led the group that analyzed samples of lunar rock – part of the rich bounty that Apollo astronauts brought back from the moon decades ago.

Lunar sample 60025. Apollo 16 astronauts collected it in 1972 while on the fifth moon mission and first to sample the lunar highlands.

Everything you want to know about sample 60025.

The moon’s age is based on the oldest ages determined for moon rocks. Specifically, these scientists looked at lunar sample 60025, which is a type of lunar rock called ferroan anorthosite, or FAN. Apollo 16 astronauts collected it in 1972 about 15 meters southwest of the lunar module on the moon’s surface.

Now cast your mind much farther back in time. According to current theories, the moon is thought to have formed when a large Mars-sized object collided with the young Earth about 4.5 billion years ago. The Mars-sized impact on Earth released magma into space. Magma is molten rock below Earth’s crust from which volcanic lava is made. The magma eventually cooled, forming the moon, according to this popular theory. 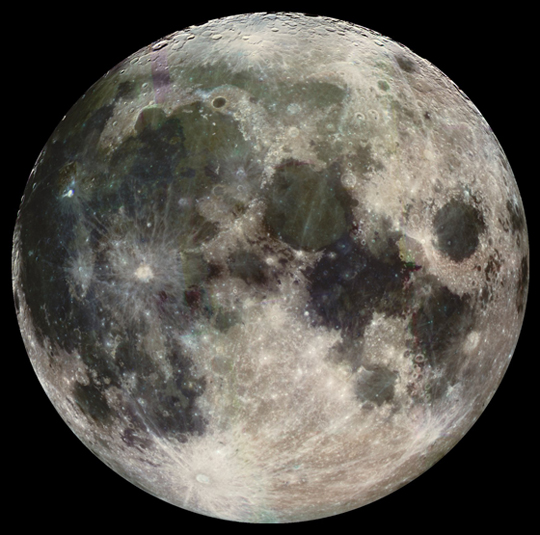 Because of this theory, today’s scientists speak of a magma ocean that might have existed on the moon shortly after it formed, billions of years ago. FAN is thought to be composed of magma from these ancient molten seas on the moon, making it the oldest material of our lone satellite’s makeup.

The team looked at levels of lead and neodymium isotopes in lunar samples from the Johnson Space Center, using new techniques to improve upon previous similar studies. They found lunar sample 60025 to be 4.36 billion years old, about 200 million years younger than prior estimates. This age lines up with the oldest known rock samples on Earth – found in Australia.

FAN samples are tricky to work with, and scientists have had difficulty in the past dating them. These moon rocks have undergone heating from impacts over billions of years, and contain relatively low amounts of the isotopes used in radiometric dating).

Prior to this study, teams analyzing FAN samples could determine an age from only one isotopic “clock” within a sample, making it difficult to draw conclusions, according to Borg. This time – after a delicate cleaning process – Borg’s team obtained ages from three isotopic “clocks” simultaneously within lunar sample 60025. All three lined up well, indicating that the age the team determined for the sample was accurate.

The sample we dated, 60025, was thought to represent the oldest lunar crustal rock because it formed as a result of flotation on a primordial ocean of magma. A young age of 4.36 billion years for 60025 suggests two possibilities. Either the magma ocean solidified at 4.36 billion years – a number substantially younger than 4.50 billion years most lunar scientists feel comfortable with. Or 60025 – and by inference other FANs – are not flotation products of the magma ocean. If the FANs are not derived from a magma ocean, one of the key observations that led to the magma ocean hypothesis is invalid.

The moon seems eternal, but, like Earth, it has a history, which scientists are trying to understand. Full moon image from Eastbourne, East Sussex, Great Britain. via Geograph

In other words, according to leading theory, FANs were born floating on a liquid surface of earthly magma that had been pulled out from Earth to form the moon. If Borg’s team is correct, either the moon’s primordial magma seas are much younger than current theory allows, or FANs developed another way – a blow to the moon’s magma ocean theory as a whole. Hence, the study could mean big things to lunar scientists.

Richard Carlson in the Department of Terrestrial Magnetism at Carnegie Institution, another member of the study team, said in an August 17, 2011 press release:

The extraordinarily young age of this lunar sample either means that the moon solidified significantly later than previous estimates, or that we need to change our entire understanding of the moon’s geochemical history.

Bottom line: Earth’s moon was thought to be 4.57 billion years old, but a detailed analysis of lunar rock sample 60025 indicates it might be as much as 200 million years younger. Lars Borg at the Lawrence Livermore National Laboratory led the research team, which also included Richard Carlson of the Carnegie Institution.