Earth has its own Star-Trek-like invisible shield 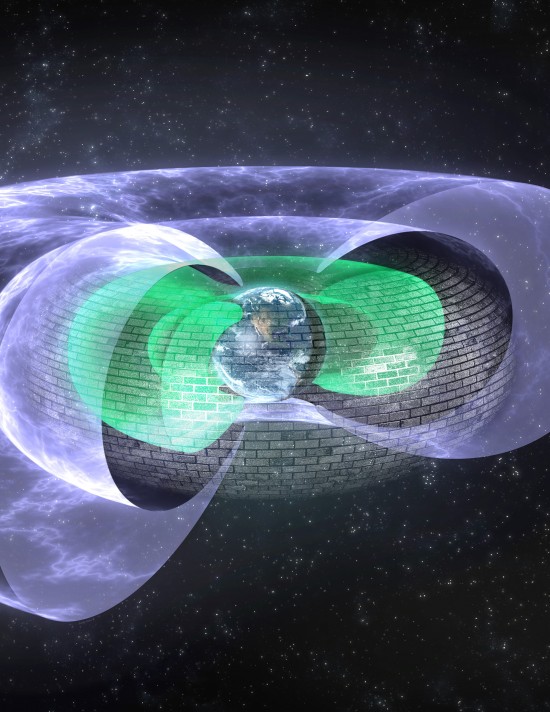 In the 1950s, James Van Allen made one of the first major discoveries of the space age when he and his team found Earth’s two Van Allen radiation belts. These doughnut-shaped rings high above Earth are filled with high-energy electrons and protons. They swell and shrink in response to incoming energy disturbances from the sun, as they protect Earth from space radiation and the effects of our sun’s activity. In 2013, Daniel Baker at the University of Colorado Boulder – who received his doctorate under Van Allen – led a team that used data from twin NASA probes to discover a third, transient storage ring between the inner and outer Van Allen radiation belts. Today, Baker announced that his team has found an “extremely sharp” boundary at the inner edge of the outer belt. This boundary layer is Earth’s own invisible Star-Trek-like shield, he said, in that it appears to block ultrafast electrons from moving deeper into Earth’s atmosphere. The journal Nature published a paper on this subject on November 26, 2014.

The newly found boundary layer is roughly 7,200 miles (11,600 km) above Earth’s surface. The Van Allen belts themselves extend up to 25,000 miles (40,000 km) high.
.
This new layer blocks what scientists sometimes call killer electrons, known to whip around Earth at near-light speed, threatening astronauts, frying satellites and degrading space systems during intense solar storms. What the killer electrons don’t do, however, is penetrate down to Earth’s surface. It was originally thought that these highly charged electrons slowly drifted downward into Earth’s upper atmosphere, where they were gradually wiped out by interactions with air molecules. But the impenetrable barrier seen by the twin Van Allen belt spacecraft stops the electrons before they get that far, said Baker, who added:

It’s almost like theses electrons are running into a glass wall in space.

Somewhat like the shields created by force fields on Star Trek that were used to repel alien weapons, we are seeing an invisible shield blocking these electrons.