Earth has a new quasi-satellite

Asteroid 2016 HO3 is Earth’s nearby companion in space. It’s not a second moon, but it has an orbit so similar to ours that it’ll remain nearby for hundreds of years.

Astronomers have discovered a small asteroid with an orbit so similar to Earth’s path around the sun that the space rock stays as a constant companion to Earth. Companion? Yes. Second moon? No. The Pan-STARRS 1 telescope in Hawaii detected the asteroid – which has been designated as 2016 HO3 on April 27, 2016. Astronomers spent a couple of months analyzing its orbit and announced on June 16, 2016 that the asteroid has been a quasi-satellite of Earth for almost 100 years. It’ll remain as Earth’s companion for centuries to come, NASA said.

There is no danger of a collision because asteroid 2016 HO3 does not get closer to our planet than about 38 times the Earth-moon distance.

According to NASA/JPL, the next closest approach during the space rock’s dance with Earth will occur on November 9, 2030 when the asteroid will be at over 9 million miles (14 million km) from our planet.

Preliminary estimates suggest the space rock has a size between 120 feet (36 meters) and 300 feet (91 meters).

Since 2016 HO3 loops around our planet, but never ventures very far away as we both go around the sun, we refer to it as a quasi-satellite of Earth.

Chodas said that another asteroid, 2003 YN107 showed a similar orbit over a decade ago, but is no longer orbiting close to Earth. Meanwhile:

This small asteroid (2016 HO3) is caught in a game of leap frog with Earth that will last for hundreds of years. 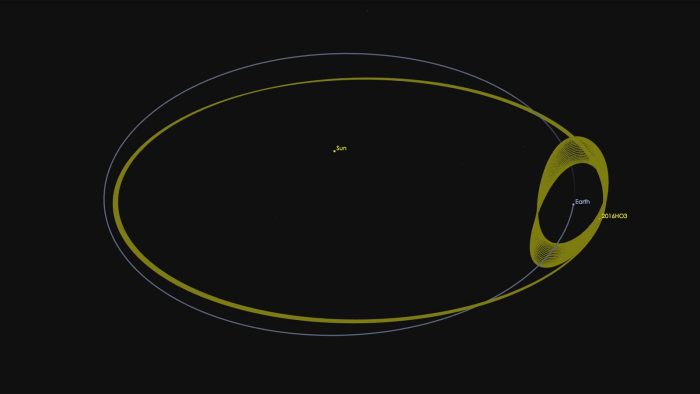