Egg-shaped Haumea has a ring

Dwarf planet Haumea – which orbits our sun in Pluto’s realm of the solar system – has become the first trans-Neptunian object known to be encircled by a ring.

The first five objects in our solar system categorized as dwarf planets are Ceres, Pluto, Eris, Makemake and Haumea. Ceres orbits relatively close to the sun in the asteroid belt between Mars and Jupiter, but the other four reside far from the sun, within a known belt of trans-Neptunian objects, that is, objects beyond Neptune’s orbit. Of these five, Haumea is the least well known, and that’s why astronomers recently organized an international campaign to observe Haumea’s passage in front of a distant star. Such events – called occultations – can be used to reveal features of the object doing the occulting, and indeed, through these observations, Haumea has been found to be encircled by a ring.

It’s the first trans-Neptunian object found to have a ring, although two less distant minor planets (including Chariklo) and all four of the gas giant planets – Jupiter, Saturn, Uranus and Neptune – are known to have them.

The work was a combined effort by astronomers at 10 observatories, and it was led by José Luis Ortiz, an astronomer at the Instituto de Astrofísica de Andalucía (Institute of Astrophysics of Andalusia, in southern Spain). It was published in the peer-reviewed journal Nature on October 12, 2017. Ortiz said in a statement:

We predicted that Haumea would pass in front of a star on the 21st of January 2017, and 12 telescopes from 10 different European observatories converged on the phenomenon. This deployment of technical means allowed us to reconstruct with a very high precision the shape and size of dwarf planet Haumea, and discover to our surprise that it is considerably bigger and less reflecting than was previously believed. It is also much less dense than previously thought, which answered questions that had been pending about the object.

Pablo Santos-Sanz (@PabloSantosSanz on Twitter), another astronomer involved in the study, said:

One of the most interesting and unexpected findings was the discovery of a ring around Haumea. Until a few years ago we only knew of the existence of rings around the giant planets; then, recently, our team discovered that two small bodies situated between Jupiter and Neptune, belonging to a group called centaurs, have dense rings around them, which came as a big surprise.

Now we have discovered that bodies even farther away than the centaurs, bigger and with very different general characteristics, can also have rings. 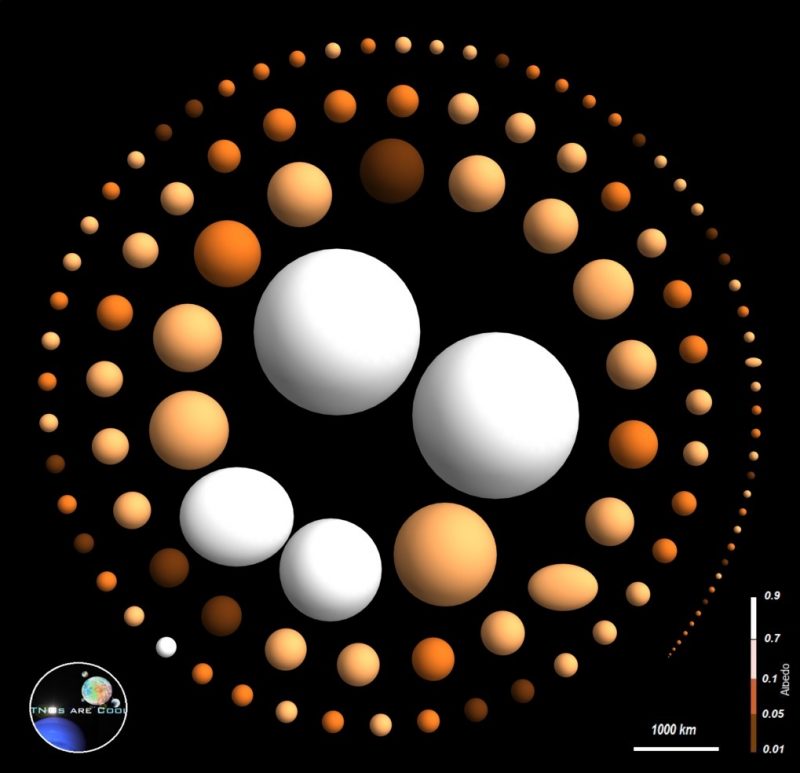 A fanciful illustration showing known trans-Neptunian objects. Haumea is the egg-shaped, large object on the left. Over 100 are known. In this illustration, the white colour indicates a high albedo (reflectivity). Image via ESA/Herschel/PACS/SPIRE/Max Planck Institute.

According to the data obtained from the stellar occultation, the ring lies on the equatorial plane of the dwarf planet, just like its biggest satellite, Hi´iaka, and it displays a 3:1 resonance with respect to the rotation of Haumea, which means that the frozen particles which compose the ring rotate three times slower around the planet than it rotates around its own axis. Ortiz said:

There are different possible explanations for the formation of the ring; it may have originated in a collision with another object, or in the dispersal of surface material due to the planet’s high rotational speed.

These astronomers also pointed out that Haumea, by itself, is an interesting object:

… it rotates around the sun in an elliptic orbit which takes it 284 years to complete (it presently lies 50 times further from the sun than the Earth), and it takes 3.9 hours to rotate around its axis, much less than any other body measuring more than a hundred kilometers long in the entire solar system. This rotational speed causes it to flatten out, giving it an ellipsoid shape similar to a rugby ball.

The recently published data reveal that Haumea measures 2.3 kilometers [1.4 miles] in its largest axis – almost the same as Pluto – but lacks the global atmosphere that Pluto has.

They said the discovery of a ring around Haumea, he said, could be a prelude to more ring discoveries, either in our solar system or exoplanet systems. 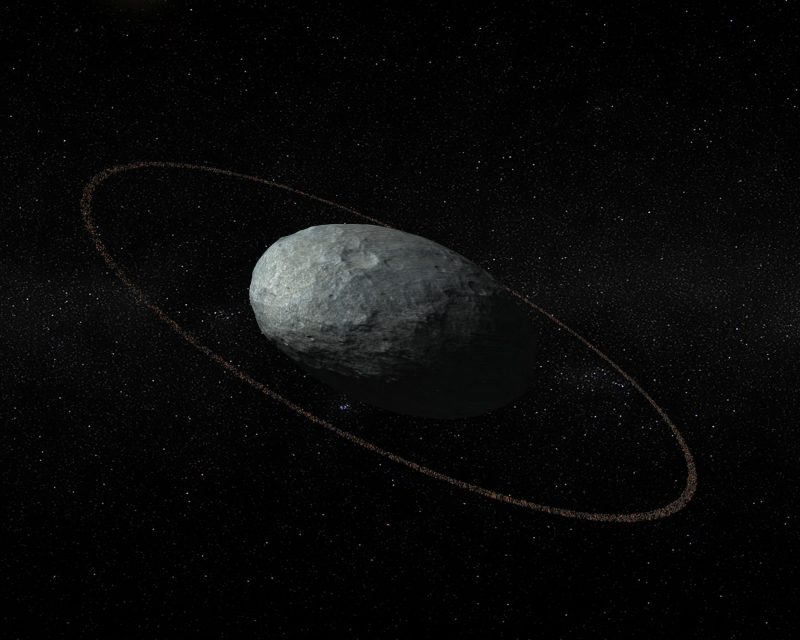 Artist concept of Haumea, with the correct proportions of the main body and the ring. The ring is at a distance of 1,421 miles (2,287 km) from the center of the main body and is darker than the surface of the dwarf planet itself. Image via Instituto de Astrofísica de Andalucía.

Bottom line: A January 2017 occultation of a star by the dwarf planet Haumea – which presently lies 50 times further from the sun than the Earth – has revealed an encircling ring.

Source: The size, shape, density and ring of the dwarf planet Haumea from a stellar occultation