What does Ceres’ carbon mean?

Earlier this month, scientists announced that dwarf planet Ceres has more carbon-rich organics than previously thought, both on and below its surface. Here’s why that’s exciting. 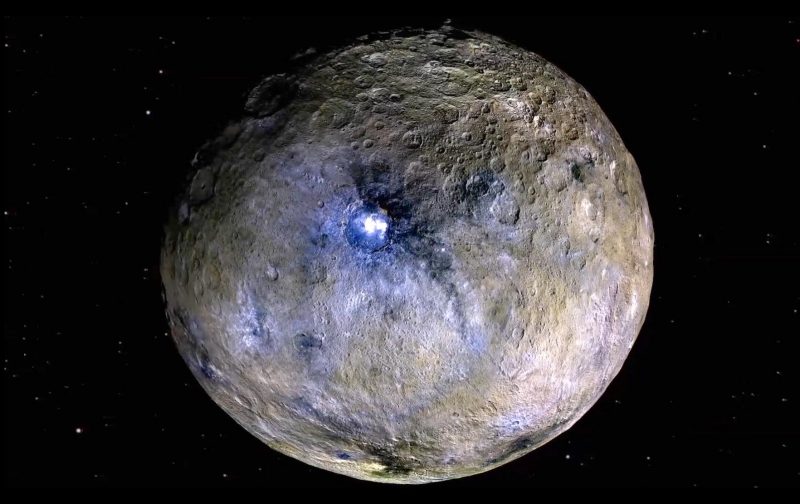 Carbon is one of the most common elements in the universe and is the basis of organic biology on Earth. It can be found throughout the solar system, even in meteorites that bounce to Earth’s surface from other parts of space. Now scientists have found that another body in the solar system – the dwarf planet Ceres – is much richer in carbon that previously thought. Those results were published in a peer-reviewed article in Nature Astronomy on December 10, 2018.

Astronomer Simone Marchi at Southwest Research Institute (SwRI) was the lead author of the new paper. He said:

Ceres is like a chemical factory. Among inner solar system bodies, Ceres has a unique mineralogy, which appears to contain up to 20 percent carbon by mass in its near surface. Our analysis shows that carbon-rich compounds are intimately mixed with products of rock-water interactions, such as clays. 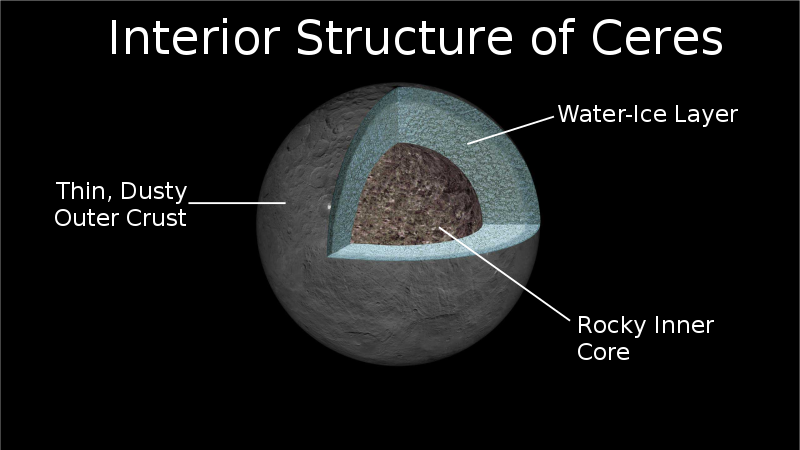 The interior structure of Ceres as scientists now understand it. Image via NASA/JPL-Caltech/UCLA/MPS/DLR/IDA.

Why is the presence of carbon so intriguing? Carbon isn’t by itself necessarily the product of or connected to life, although it does serve as the basis for organic chemistry and biology on Earth. When combined with oxygen and hydrogen, carbon can form many groups of important biological compounds including sugars, alcohols and fats. Its presence on Ceres is evidence that the basic ingredients for life – including carbon – can be found in many different places, not only in our solar system but throughout the universe.

More specifically, the new findings show that Ceres was, and still is, rich in amorphous carbon – a carbon-rich organic material – which is significant in terms of how carbon is distributed throughout the solar system. (Organic materials are any molecules that contain carbon – they can be formed on their own without life but are also building blocks of life). The new data suggests that Ceres contains several times more amorphous carbon on its surface and in its subsurface than even the most carbon-rich meteorites.

While Ceres contains more carbon than meteorites, the study also shows that 50 to 60 percent of Ceres’ upper crust may have a composition similar to primitive carbonaceous chondrite meteorites – some of the most complex of all meteorites. 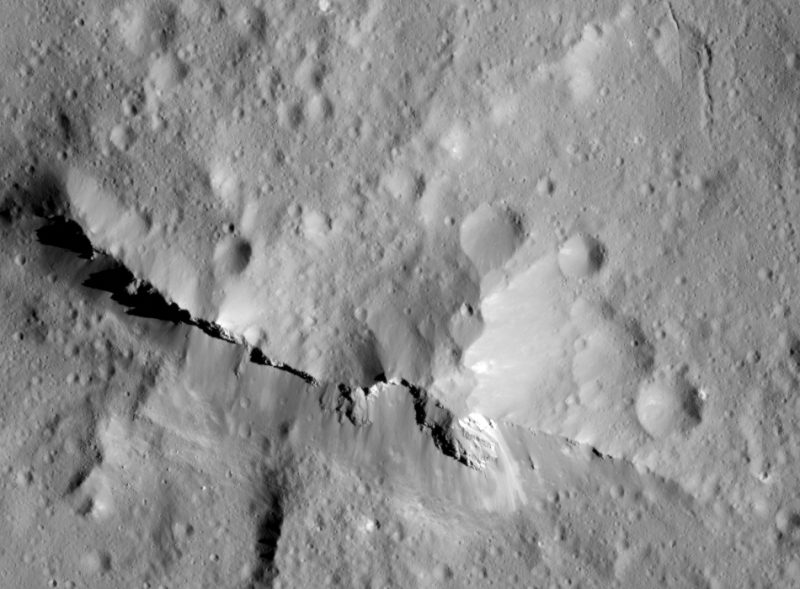 Close-up view inside Urvara crater on Ceres. The 6,500-foot (1981-meter) central ridge is made from materials uplifted from deep below the surface, which experienced rock-water chemical interactions. Image via NASA/JPL-Caltech/UCLA/MPS/DLR/IDA.

Our results imply that either Ceres accreted ultra-carbon-rich materials or that carbon was concentrated in its crust. Both potential scenarios are important, because Ceres’ mineralogical composition indicates a global-scale event of rock-water alteration, which could provide conditions favorable to organic chemistry.

In other words, the carbon on Ceres may originate from when Ceres first formed or from incoming impacts of other asteroids. Scientists don’t know yet which scenario is correct. But regardless, the evidence for chemical reactions with water is intriguing, since that can eventually lead to the formation of the building blocks of life, even if not life itself.

Ceres is classified as a dwarf planet but is also the largest asteroid in the main asteroid belt between Mars and Jupiter. NASA’s Dawn spacecraft recently finished its mission at Ceres on November 1, 2018, studying its geology and sending back incredible high-resolution images of its surface from orbit. One big surprise was the “bright spots” – light-colored deposits, now determined to be sodium carbonate salts – on the darker rocky surface. Scientists think they were formed when when water came up to the surface from deeper below and then evaporated in Ceres’ extremely tenuous and sporadic water vapor “atmosphere.”

The best-known bright spots are those in Occator Crater, which stand out starkly against the darker rocky surface. 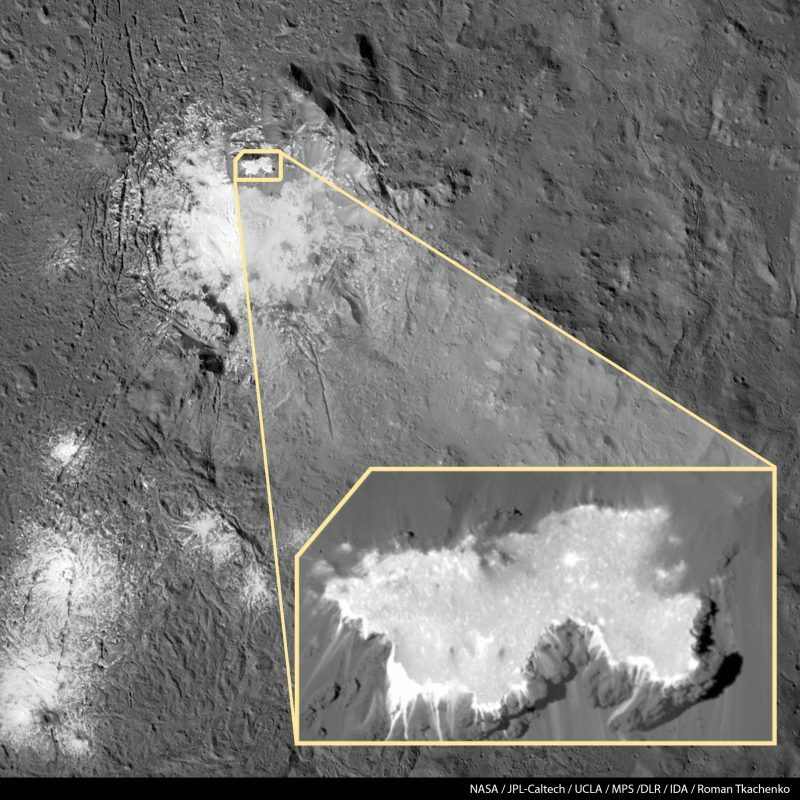 Whether Ceres ever had conditions suitable for life to evolve is still unknown, although there is also evidence that it has, or at least once had, water below the surface – maybe even a subsurface ocean. This water produced chemical reactions when it came in contact with minerals in rocks. There is also evidence for past cryovolcanic activity – cryovolcanoes, which erupt water, ammonia or methane rather than molten rock. It’s even possible that the subsurface environment was once warm and wet enough for basic biological chemistry to actually begin, although no direct signs of that have been discovered yet.

Bottom line: As the largest object in the asteroid belt, Ceres is a fascinating world, and has been more geologically active than previously thought. The fact that Ceres is rich in organic carbon is a big part of its geological history and now scientists are beginning to understand what that means not only for the widespread presence of carbon in the solar system but also how organic chemistry can – at least sometimes – lead to the development of life itself.