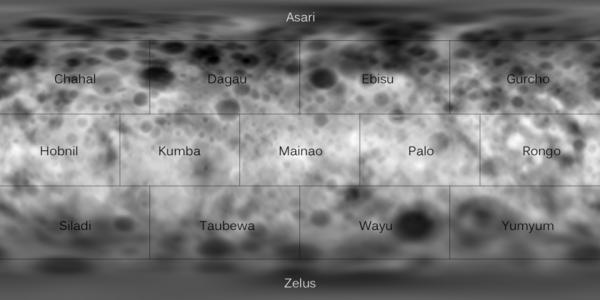 Emily Lakdawalla of the Planetary Society created this image after sitting in on three sessions at last week’s Lunar and Planetary Science Conference in Houston, all of which featured new results since the Dawn spacecraft’s arrival at the dwarf planet Ceres. Dawn was successfully inserted into orbit around Ceres on March 6, 2015. Lakdawalla applied newly announced names for various regions (quads) on Ceres to a digital elevation model – essentially a topographic map – of the little world. The result is the image above, published on Lakdawalla’s blog on March 19.

Looking for the crater with the bright feature? It’s on the boundary between the Palo and Ebisu quads. No news about what it might be yet, but NASA has said to expect new images in early April.

In October 2014, the International Astronomical Union (IAU) announced its naming convention for Ceres. Craters on Ceres will be named for agriculture deities (after all, Ceres is the goddess of agriculture in Roman mythology), while other features were be named for world agricultural festivals.

As with mapping of the protoplanet 4 Vesta – an earlier world visited and mapped by the DAWN spacecraft, from July 2011 to September 2012 – each 1 Ceres quadrangle will be mapped thoroughly by a team member.

View larger. | Here’s another cool composite image, also created by Emily Lakdawalla, showing Ceres as Dawn approached it. The crater with the mysterious bright feature is toward the center of the image.

Bottom line: At last week’s Lunar and Planetary Science Conference, scientists showed a map that organizes Ceres’ surface into quads, with each quad named after one harvest deity. Emily Lakdawalla of the Planetary Society superimposed those new place names on a digital elevation model (topographic map) of Ceres, and the resulting image is at the top of this page.