Scientists using radar to peer through Titan’s dense clouds see vast fields of sand dunes, not unlike those on Earth. See the newest images.

Last week (January 23, 2012), space scientists released a montage of images of dune fields on Saturn’s large moon Titan. The images are the result of a new analysis of radar data from NASA’s Cassini mission to Saturn. The scientists say these images give new clues about the climate and geology of Titan, which is our solar system’s second-largest moon, the only moon with an atmosphere, and which has a bigger volume than the planet Mercury (although it is only half as dense). 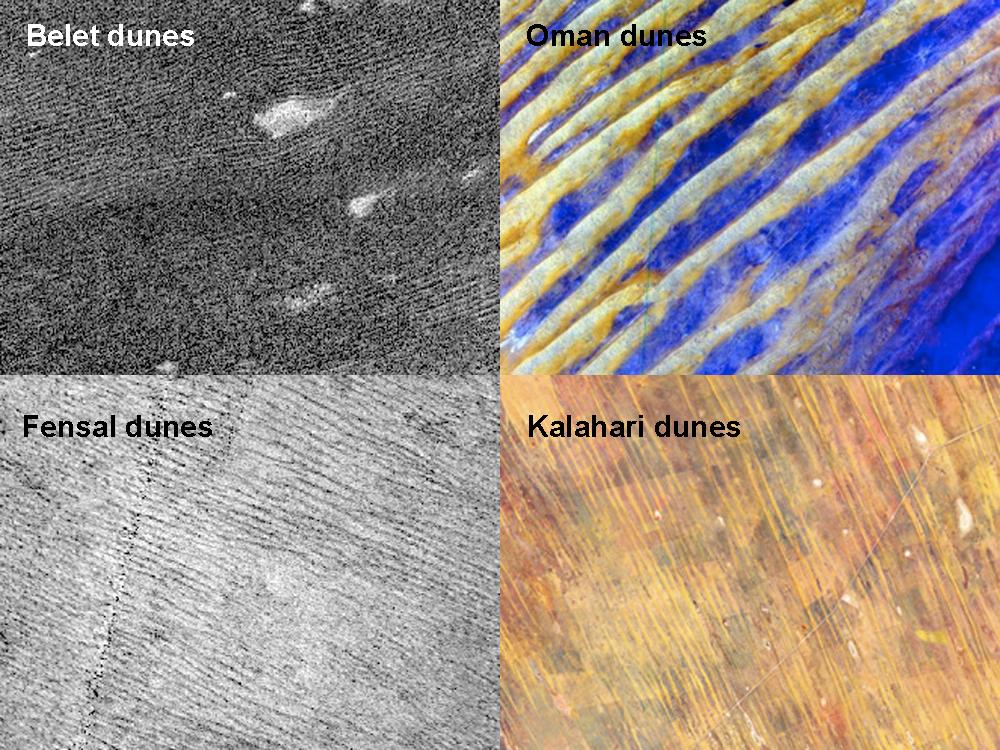 Dune fields cover about 13 percent of Titan, or roughly the surface area of the United States. Scientists say Titan’s dunes are similar to the some found in the earthly Republic of Namibia, which is in southwestern Africa. Namibia has some giant dunes – some reaching nearly 1,000 feet (300 meters) in height. Titan has some giant dunes as well. Even the average sized ones are 300 feet (100 meters) high, and the longitudinal (or linear) dunes, which are always aligned with average wind direction, can stretch hundreds of miles across the surface of this alien moon.

Yes, Titan has wind and rain of liquid methane, and, in addition to sand dunes, it has rivers, lakes and seas (probably of liquid methane or ethane) and shorelines. It has seasons and seasonal weather patterns. All of this is amazing news of recent years, since Titan’s surface cannot be seen directly. It is hidden by this moon’s dense atmosphere. But Cassini is equipped with radar, and that’s where we get these images, and much of what we know of Titan.

Scientists are now saying that the size and spacing of dunes on Titan has given them clues as to how the dunes formed and evolved. For example, the size of Titan’s dunes appears to be controlled by at least two factors: latitude and altitude. Sand dunes on Titan are confined to low latitudes – in a band between 30 degrees south latitude and 30 degrees north latitude, with fewer dunes toward the north. Meanwhile, dunes at higher altitudes on Titan tend to be thinner and more widely separated, possibly with a thinner covering of sand. 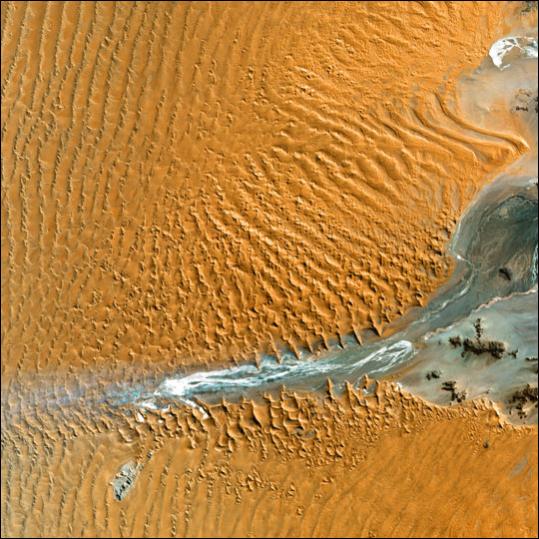 Earthly sand dunes, not unlike the dunes on Titan. These are in Namibia, in southwestern Africa, where winds blowing in off the Atlantic Ocean create the tallest sand dunes on Earth. Image Credit: NASA

The dunes in the image above aren’t on Titan. They’re on Earth, in Namibia in southwestern Africa, in the Namib-Naukluft National Park, an ecological preserve in Namibia’s vast Namib Desert. Earthly winds, blowing in from the Atlantic Ocean, create the tallest sand dunes on Earth here. They look similar, yes? That’s because nature works the same way throughout space. If it didn’t, by the way, we’d be at a loss to understand anything about what’s around us in the cosmos. You’ll find more information about this image here.

There’s more to the Titan dune story, too, from NASA, which you can read here. 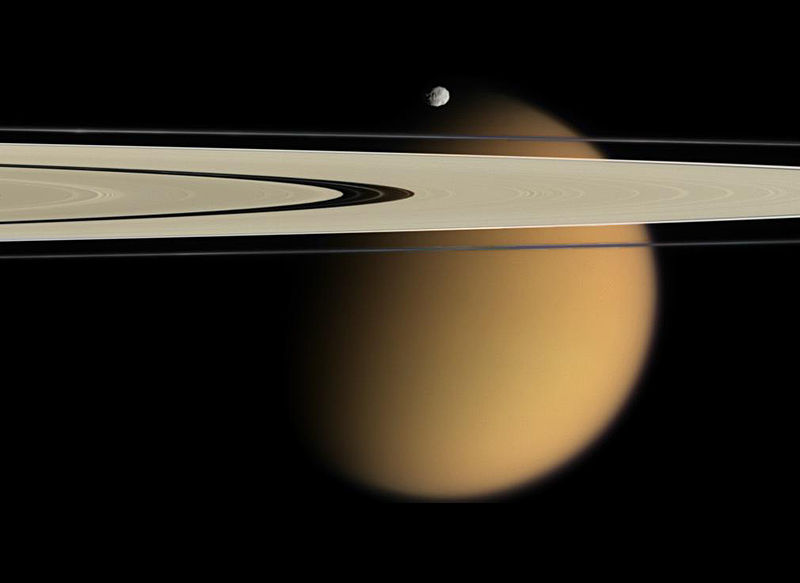 Smog-enshrouded Titan in the background, with Saturn’s small moon Epimetheus, plus Saturn’s F ring, in the foreground. Beneath Titan’s dense atmosphere, wind blows and a rain of liquid methane falls. There are sand dunes, rivers, lakes and seas (probably of liquid methane or ethane) and shorelines. Titan also has seasons and seasonal weather patterns. Image via Cassini spacecraft.

By the way, the Cassini orbiter has been weaving in and around Saturn and its moon since 2004. It has now far surpassed its original mission and is scheduled to remain in orbit until 2017.

Bottom line: On January 23, 2012, space scientists released a montage of images of dune fields on Saturn’s large moon Titan. The images are the result of a new analysis of radar data from NASA’s Cassini mission to Saturn. The scientists say these images give new clues about the climate and geology of Titan.