At 26 million light-years from Earth, NGC 5195 has one of the nearest supermassive black holes to Earth that’s currently undergoing such violent outbursts. 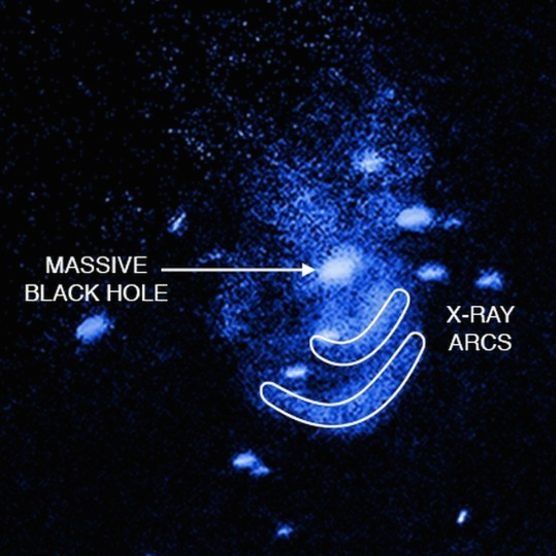 At 227th AAS meeting in Florida this week, astronomers with the Chandra X-ray Observatory announced evidence for powerful blasts – produced by a giant black hole in a dwarf companion to the large Whirlpool galaxy, some 26 million light-years from Earth. The companion is NGC 5195. It contains one of the nearest supermassive black holes to Earth that’s currently undergoing such violent outbursts.

Eric Schlegel of The University of Texas in San Antonio, who led the study, said in a statement:

For an analogy, astronomers often refer to black holes as ‘eating’ stars and gas. Apparently, black holes can also burp after their meal.

Our observation is important because this behavior would likely happen very often in the early universe, altering the evolution of galaxies. It is common for big black holes to expel gas outward, but rare to have such a close, resolved view of these events. 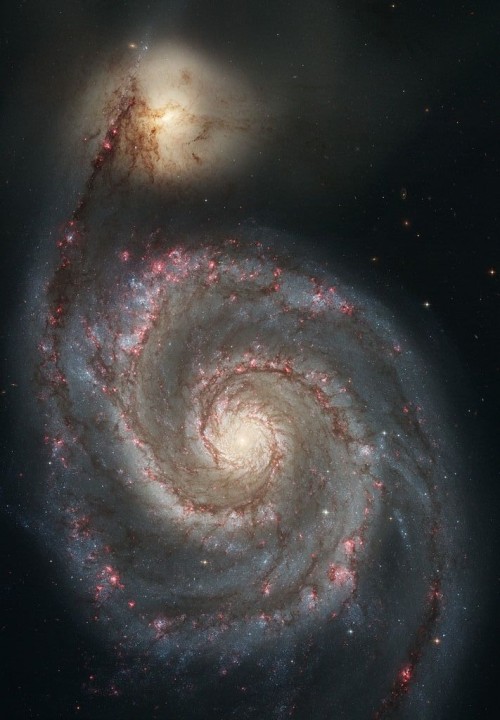 In the Chandra data, Schlegel and his colleagues detected two arcs of X-ray emission close to the center of NGC 5195. Co-author Christine Jones of the Harvard-Smithsonian Center for Astrophysics (CfA) said:

These huge blasts may have been triggered by the interaction of the dwarf galaxy with the larger Whirlpool companion. The interaction might have caused gas to be funneled in towards the black hole, which generated energy as it fell inward, producing the bursts.

This activity is likely to have had a big effect on the galactic landscape, these astronomers believe. Their statement explained:

Just outside the outer X-ray arc, the researchers detected a slender region of emission of relatively cool hydrogen gas … This suggests that the hotter, X-ray emitting gas has ‘snow-plowed,’ or swept up, the hydrogen gas from the center of the galaxy.

In NGC 5195, the properties of the gas around the X-ray-glowing arcs suggest that the outer arc has plowed up enough material to trigger the formation of new stars.

This shows that black holes can create, not just destroy. 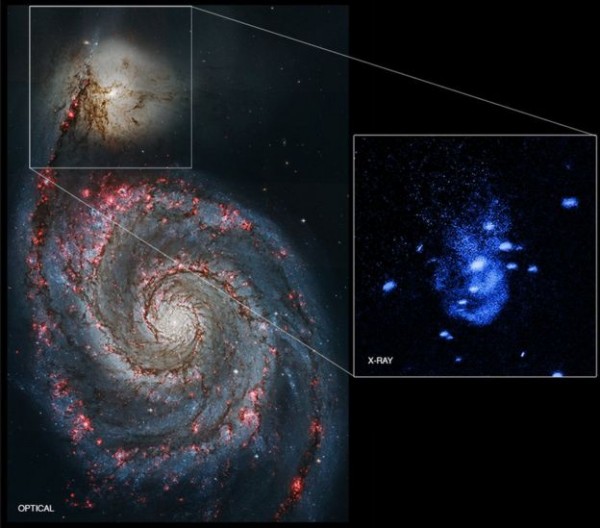 Here’s how the smaller galaxy looks in X-rays. Image via NASA/STScI/CXC/Univ of Texas

Bottom line: Astronomers used the Chandra X-ray Observatory to catch two bursts of material from the supermassive black hole at the center of a dwarf galaxy called NGC 5195. This galaxy is the companion to the beautiful Whirlpool galaxy, and these “belches” from the black hole may be caused by an interaction between the two galaxies.