Does organic material in comets predate our solar system?

“If cometary organic molecules were indeed produced in interstellar space—and if they played a role in the emergence of life on our planet—might they not also have seeded life on many other planets of our galaxy?” 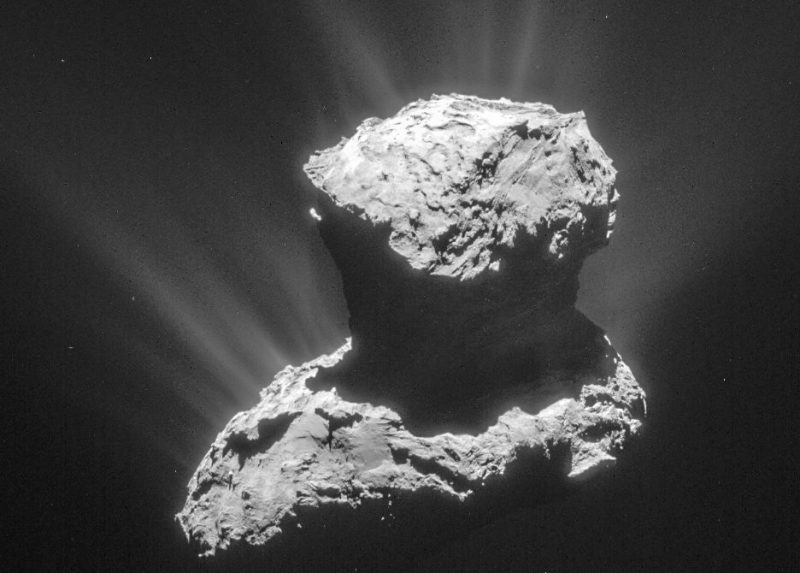 On September 4, 2017, researchers in Paris announced the results of their study of the organic compounds – combinations of carbon, hydrogen, nitrogen, and oxygen – in comet 67P Churyumov-Gerasimenko. This is the comet studied up-close and in detail by ESA’s Rosetta spacecraft for two years, beginning in August 2014. The sorts of organic molecules found in this comet and others have long been proposed by scientists as possible building blocks for life on Earth. Published in late August in the peer-reviewed journal Monthly Notices of the Royal Astronomical Society, the French researchers advance the theory that this organic matter has its origin in interstellar space and predates the birth of our solar system.

The Rosetta mission found a large amount of organic material in the nucleus of the comet, which some people call simply 67P and others call Chury for Klim Ivanovich Churyumov, one of its discovers. The Rosetta mission found that organic matter made up 40% (by mass) of the nucleus of the comet. According to researchers Jean-Loup Bertaux and Rosine Lallement, not only were the organic molecules produced in interstellar space, well before the formation of the solar system, but also other astronomers are already very familiar with the source of this matter. Their statement explained:

For 70 years, scientists have known that analysis of stellar spectra indicates unknown absorptions, throughout interstellar space, at specific wavelengths called the diffuse interstellar bands (DIBs). DIBs are attributed to complex organic molecules that American astrophysicist Theodore Snow believes may constitute the largest known reservoir of organic matter in the universe.

This interstellar organic material is usually found in the same proportions. However, very dense clouds of matter like presolar nebulae are exceptions. In the middle of these nebulae, where matter is even denser, DIB absorptions plateau or even drop. This is because the organic molecules responsible for DIBs clump together there. The clumped matter absorbs less radiation than when it floated freely in space.

Such primitive nebulae end up contracting to form a solar system like our own, with planets . . . and comets. The Rosetta mission taught us that comet nuclei form by gentle accretion of grains progressively greater in size. First, small particles stick together to form larger grains. These in turn combine to form still larger chunks, and so on, until we have a comet nucleus a few kilometers wide.

Thus, the organic molecules that formerly populated the primitive nebulae—and that are responsible for DIBs—were probably not destroyed, but instead incorporated into the grains making up cometary nuclei. And there they have remained for 4.6 billion years. A sample-return mission would allow laboratory analysis of cometary organic material and finally reveal the identity of the mysterious interstellar matter underlying observed patterns in stellar spectra.

If cometary organic molecules were indeed produced in interstellar space—and if they played a role in the emergence of life on our planet, as scientists believe today—might they not also have seeded life on many other planets of our galaxy? 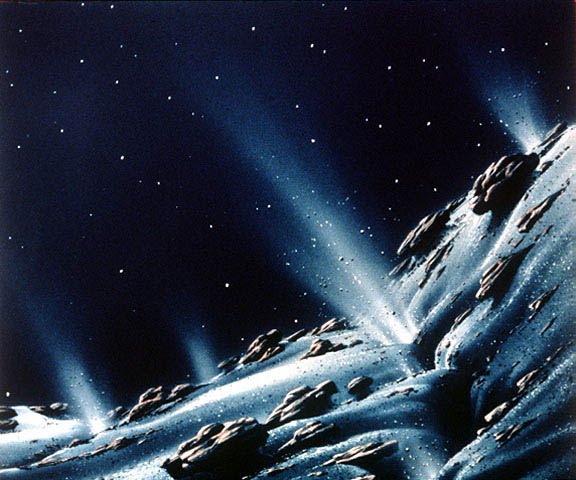 Artist’s concept of comets seeding the early Earth – or perhaps another planet – with organic material. Image via Mdosnewscienceworld.

Bottom line: French researchers advance the theory that the organic matter found in comets – possible building blocks for earthly life – has its origin in interstellar space and predates the birth of our solar system.