Astronomers find the smallest star yet

This star is just a sliver larger than Saturn, not even the largest planet in our solar system. Yet it’s massive enough to shine as a star, and its pull of gravity is some 300 times stronger than Earth’s. 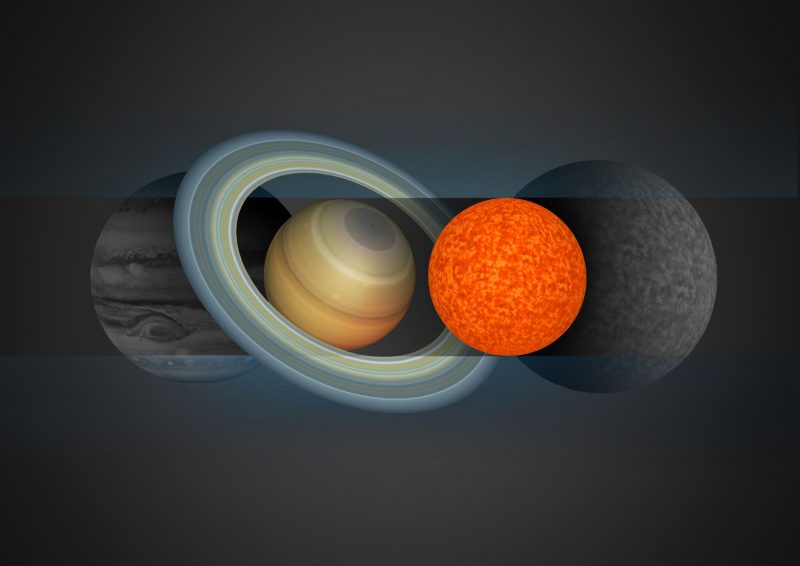 Artist’s concept of newly-measured smallest star, called EBLM J0555-57Ab, in contrast to planets Jupiter and Saturn and to the small, cool star Trappist-1, known to be home to at least 7 planets. Image via University of Cambridge.

Last night (July 12, 2017), a team of astronomers led by University of Cambridge announced it has discovered the smallest star yet. This star is smaller than Jupiter, our solar system’s largest planet. It’s slightly larger than Saturn, second-largest planet in our solar system. But it’s a star, not a planet, and therefore much more massive than Jupiter or Saturn. More mass translates to stronger gravity; the pull of gravity of this very small star is some 300 times stronger than Earth’s (Jupiter’s gravity is about 2.5 times that of Earth). The newly-measured star, known to astronomers as EBLM J0555-57Ab, is located about 600 light-years away. Details about it will be published in the peer-reviewed journal Astronomy & Astrophysics (preprint here).

Can stars get any smaller than this one? Astronomers say it’s unlikely because – in order to create the thermonuclear fusion reactions needed for stars to shine – stars need a minimum mass. Alexander Boetticher, the lead author of the study, commented:

Our discovery reveals how small stars can be. Had this star formed with only a slightly lower mass, the fusion reaction of hydrogen in its core could not be sustained, and the star would instead have transformed into a brown dwarf.

EBLM J0555-57Ab is part of a double star system. It was identified as it passed in front of its much larger companion star by the same technique – called the transit technique – used to identify many exoplanets.

And speaking of exoplanets … astronomers say that small, dim stars like EBLM J0555-57Ab are the best possible candidates for detecting Earth-sized exoplanets that might have liquid water on their surfaces.

In fact, EBLM J0555-57Ab is being compared to TRAPPIST-1, an ultracool dwarf star, recently discovered to be surrounded by at least seven temperate Earth-sized worlds. The newly-measured star has a mass comparable to the current estimate for TRAPPIST-1, but has a radius nearly 30% smaller.

[EBLM J0555-57Ab] is smaller, and likely colder, than many of the gas giant exoplanets that have so far been identified. While a fascinating feature of stellar physics, it is often harder to measure the size of such dim low-mass stars than for many of the larger planets. Thankfully, we can find these small stars with planet-hunting equipment, when they orbit a larger host star in a binary system.

It might sound incredible, but finding a star can at times be harder than finding a planet.

Bottom line: Astronomers have measured a size and mass for the star EBLM J0555-57Ab and determined it’s the smallest star yet discovered.