The detection of phosphine in Venus’ clouds is a big deal

Here’s how we can find out if it’s a sign of life. 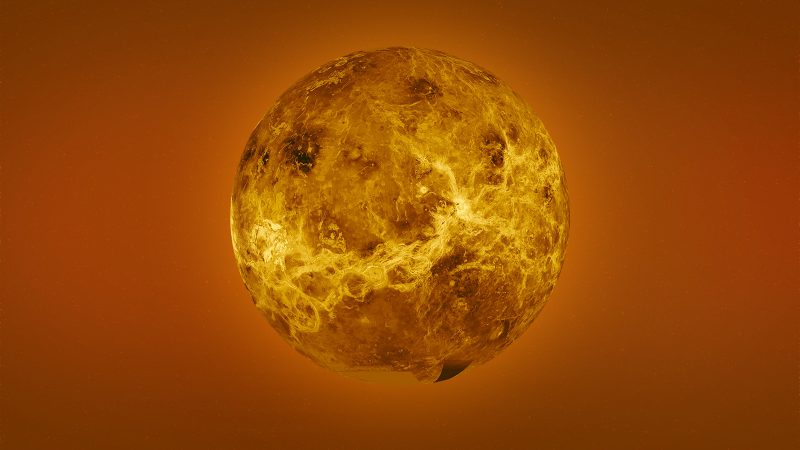 A radar mosaic image of Venus. Image via NASA.

On September 14, 2020, a new planet was added to the list of potentially habitable worlds in the solar system: Venus.

Phosphine, a toxic gas made up of one phosphorus and three hydrogen atoms (PH3), commonly produced by organic life forms but otherwise difficult to make on rocky planets, was discovered in the middle layer of the Venus atmosphere. This raises the tantalizing possibility that something is alive on our planetary neighbor. With this discovery, Venus joins the exalted ranks of Mars and the icy moons Enceladus and Europa among planetary bodies where life may once have existed, or perhaps might even still do so today.

I’m a planetary scientist and something of a Venus evangelical. This discovery is one of the most exciting made about Venus in a very long time, and opens up a new set of possibilities for further exploration in search of life in the solar system. 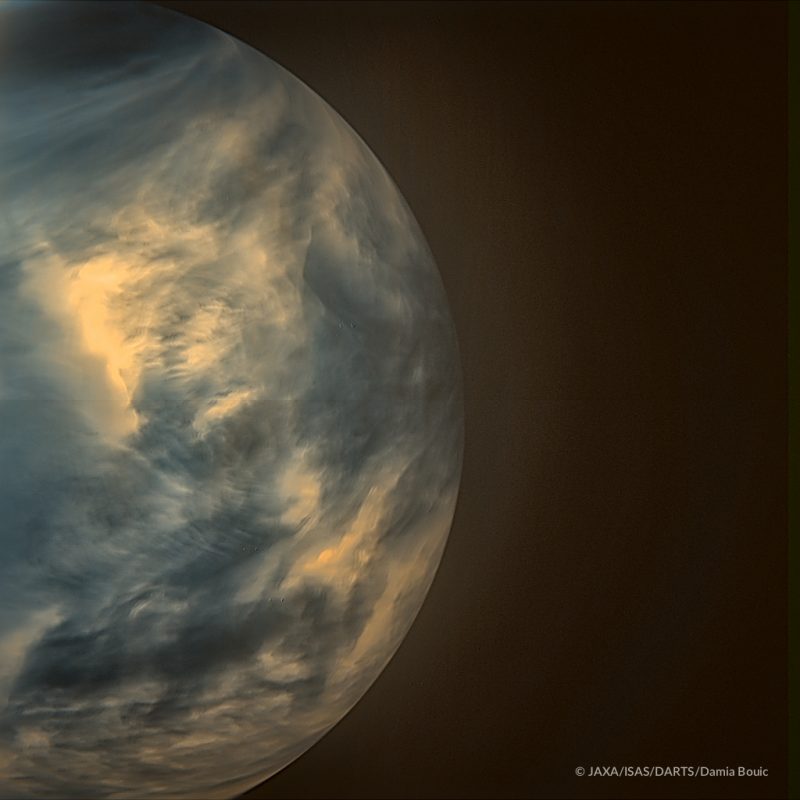 Venus as seen in the infrared by the Japanese Akatsuki spacecraft. The warm colors are from the hot lower atmosphere glowing through the cooler cloud layers above. Image via JAXA/ ISAS/ DARTS/ Damia Bouic.

First, it’s critical to point out that this detection does not mean that astronomers have found alien life in the clouds of Venus. Far from it, in fact.

Although the discovery team identified phosphine at Venus with two different telescopes, helping to confirm the initial detection, phosphine gas can result from several processes that are unrelated to life, such as lightning, meteor impacts or even volcanic activity.

However, the quantity of phosphine detected in the Venusian clouds seems to be far greater than those processes are capable of generating, allowing the team to rule out numerous inorganic possibilities. But our understanding of the chemistry of Venus’ atmosphere is sorely lacking: Only a handful of missions have plunged through the inhospitable, carbon dioxide-dominated atmosphere to take samples among the global layer of sulfuric acid clouds.

So we planetary scientists are faced with two possibilities: Either there is some sort of life in the Venus clouds, generating phosphine, or there is unexplained and unexpected chemistry taking place there. How do we find out which it is? 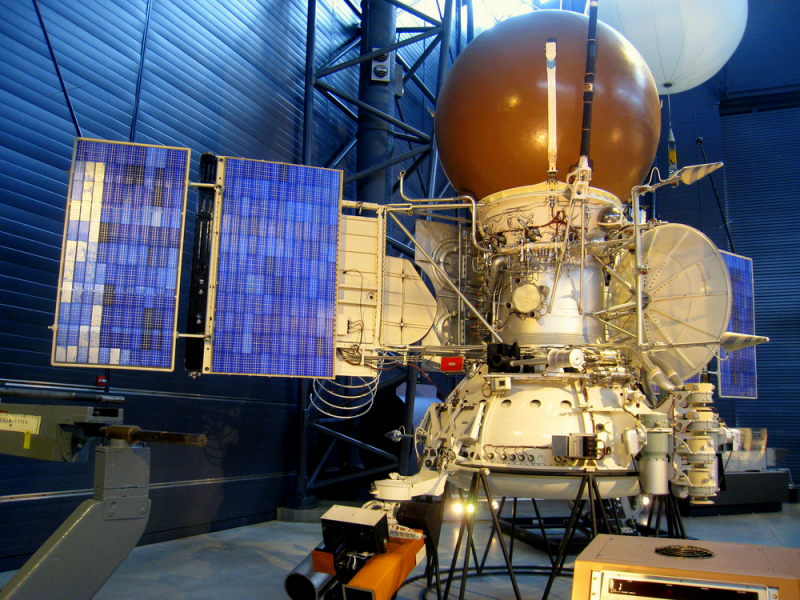 A model of the Soviet Vega 1 spacecraft at the Udvar-Hazy Center, Dulles International Airport. Vega 1 carried a balloon to Venus on its way to visit Halley’s Comet in 1985. Image via Daderot/ Wikipedia

First and foremost, we need more information about the abundance of PH3 in the Venus atmosphere, and we can learn something about this from Earth. Just as the discovery team did, existing telescopes capable of detecting phosphine around Venus can be used for follow-up observations, to both definitively confirm the initial finding and figure out if the amount of PH3 in the atmosphere changes with time. In parallel, there is now a huge opportunity to carry out lab work to better understand the types of chemical reactions that might be possible on Venus — for which we have very limited information at present. 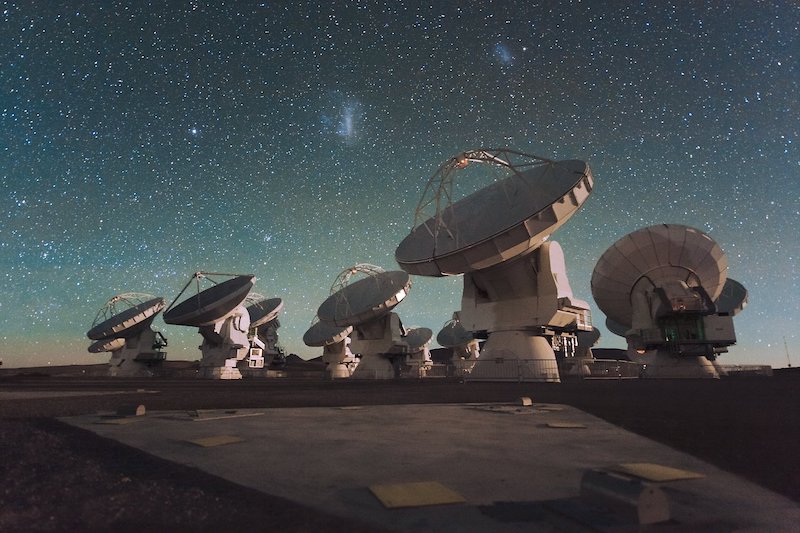 Antennas of the Atacama Large Millimeter/submillimeter Array (ALMA), on the Chajnantor Plateau in the Chilean Andes. The Large and Small Magellanic Clouds, two companion galaxies to our own Milky Way galaxy, can be seen as bright smudges in the night sky, in the center of the photograph.

Once more into the breach

But measurements on and from Earth can take us only so far. To really get to the heart of this mystery, we need to go back to Venus. Spacecraft equipped with spectrometers that can detect phosphine from orbit could be dispatched to the second planet with the express purpose of characterizing where, and how much, of this gas is there. Because spacecraft can survive for many years in Venus’ orbit, we could obtain continuous observations with a dedicated orbiter over a much longer period than with telescopes on Earth.

But even orbital data can’t tell us the whole story. To fully get a handle on what’s happening at Venus, we have to actually get into the atmosphere. And that’s where aerial platforms come in. Capable of operating above much of the acidic cloud layer – where the temperature and pressure are almost Earthlike – for potentially months at a time, balloons or flying wings could take detailed atmospheric composition measurements there. These craft could even carry the kinds of instruments being developed to look for life on Europa. At that point, humanity might finally be able to definitively tell if we share our Solar System with Venusian life.

A concept for an aerial platform at Venus. Two connected balloons could take turns to inflate, allowing the balloon to control the altitude at which it floats. An instrument package would then hang from below the balloons. Image via NASA/ JPL-Caltech

A new dawn for Venus exploration?

Thirty-one years have elapsed since the United States last sent a dedicated mission to Venus. That could soon change as NASA considers two of four missions in the late 2020s targeting Venus. One, called VERITAS, would carry a powerful radar to peer through the thick clouds and return unprecedented high-resolution images of the surface. The other, DAVINCI+, would plunge through the atmosphere, sampling the air as it descended, perhaps even able to sniff any phosphine present. NASA plans to pick at least one mission in April 2021.

I have argued before for a return to Venus, and will continue to do so. Even without this latest scientific discovery, Venus is a compelling exploration target, with tantalizing evidence that the planet once had oceans and perhaps even suffered a hellish fate at the hands of its own volcanic eruptions.

But with the detection of a potential biomarker in Venus’ atmosphere, we now have yet another major reason to return to the world ancient Greek astronomers called Phosphorus – a name for Venus that, it turns out, is wonderfully prescient.

Bottom line: On September 14, 2020, Venus was added to the list of potentially habitable worlds in the solar system. Phosphine, a toxic gas commonly produced by organic life forms but otherwise difficult to make on rocky planets, was discovered in the Venus atmosphere. Either there is some sort of life in the Venus clouds, generating phosphine, or there is unexplained and unexpected chemistry taking place there. How do we find out which it is?