Close-up on a giant star

Astronomers have created the first-ever detailed image of the surface of a giant star, about 530 light-years away and 350 times larger than our sun. 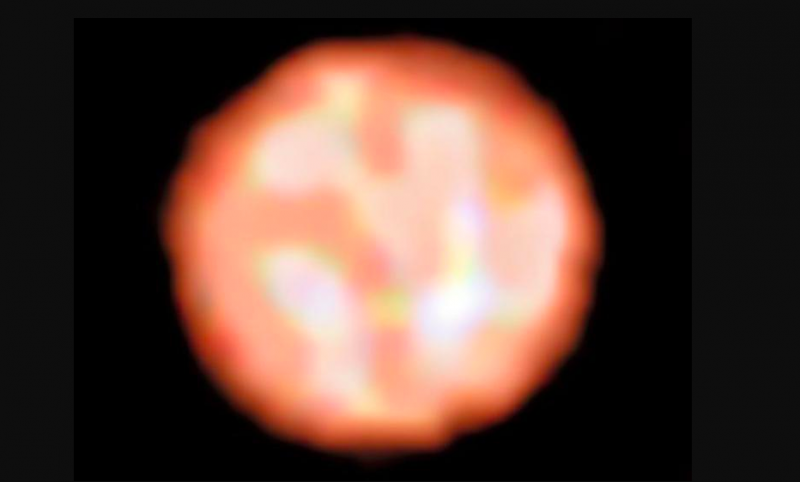 An international team of astronomers has produced the first detailed image of the surface of a giant star – named Pi1 Gruis – that’s about 530 light-years from Earth in the constellation Grus (Latin for ‘crane’). It has about the same mass as our sun, but is 350 times larger and several thousand times as bright.

Pi1Gruis is a red giant, a star in the last major phase of life, the researchers said, and resembles what the sun will become at the end of its life in five billion years.

The imaging reveals a nearly circular, dust-free atmosphere with complex areas of moving material, known as convection cells or granules, according to a study published December 20, 2017 in the journal Nature. According to a statement from the researchers:

Convection, the transfer of heat due to the bulk movement of molecules within gases and liquids, plays a major role in astrophysical processes, such as energy transport, pulsation and winds.

The researchers found that the surface of Pi1 Gruis has just a few convective cells, or granules, that are each about 74.5 million miles (120 million km) across — about a quarter of the star’s diameter. Just one of these granules would extend from the sun to beyond Venus.

By comparison, the sun’s surface contains about two million convection cells, with typical diameters of just 930 miles (1,500 km). The vast size differences in the convection cells of these two stars can be explained in part by their varying surface gravities, said the researchers. Pi1 Gruis is just 1.5 times the mass of the sun but much larger, resulting in a much lower surface gravity and just a few, extremely large, granules.

For the study, the team used the Precision Integrated-Optics Near-infrared Imaging ExpeRiment (PIONIER) instrument on the ESO’s Very Large Telescope Interferometer (VLTI) in Chile to observe the star. Researcher Fabien Baron is assistant professor in the Department of Physics and Astronomy at Georgia State University. Baron said in a statement:

This is the first time that we have such a giant star that is unambiguously imaged with that level of details. The reason is there’s a limit to the details we can see based on the size of the telescope used for the observations. For this paper, we used an interferometer. The light from several telescopes is combined to overcome the limit of each telescope, thus achieving a resolution equivalent to that of a much larger telescope.

Bottom line: An international team of astronomers have created the first-ever detailed image of the surface of a giant star, 350 times larger than our sun.