Researchers say these high-energy neutrinos come from sources beyond our Milky Way galaxy. They say the ability to discover them heralds a new form of astronomy. 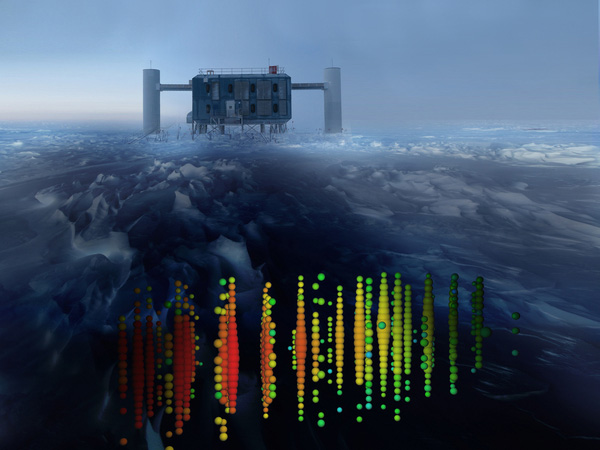 Illustration showing one of the highest-energy neutrino events of this study, superimposed on a view of the IceCube Lab at the South Pole. Image via University of Wisconsin

Researchers at the South Pole – using a cubic-kilometer particle detector embedded in Antarctic ice – say they have provided independent confirmation of a 2013 sighting of cosmic neutrinos. These ultra high-energy particles are thought to have traversed space unimpeded by stars, planets, galaxies, magnetic fields or clouds of interstellar dust before their detection by the IceCube Neutrino Observatory at the South Pole. Did this telescope actually detect the neutrinos? No. It detected secondary particles – called muons – created on the rare occasions when neutrinos interact with matter. Still, it’s a formidable piece of research, published on August 20, 2015 in the journal Physical Review Letters.

There are some mightily cool aspects of this far-southern study. The telescope at the South Pole, for example, is unlike any other on Earth. The IceCube Neutrino Observatory is composed of thousands of optical sensors sunk deep beneath Antarctic ice. It’s designed to look through the Earth to observe the Northern Hemisphere sky. In this way, Earth acts as a filter to help weed out a confusing background of muons created when cosmic rays crash into the Earth’s atmosphere. Francis Halzen, a University of Wisconsin, Madison, professor of physics and the principal investigator of IceCube, said:

Looking for muon neutrinos reaching the detector through the Earth is the way IceCube was supposed to do neutrino astronomy, and it has delivered. This is as close to independent confirmation as one can get with a unique instrument.

Cosmic neutrinos themselves are also as fascinating as they are elusive. Physicists call the ghost particles. They pass right through the densest earthly substances as if those substances weren’t there. Also, unlike most subatomic particles, neutrinos have no electric charge, so they can’t be captured using electric or magnetic forces. In short, they are very difficult to detect.

These researchers said they had to sort through the billions of subatomic particles that zip through the IceCube Neutrino Observatory each year, to gather data confirming the 2013 neutrino sighting. They found 21 ultra high-energy muons, created in neutrino inteactions. The IceCube Collaboration called the data an “unequivocal signal” for cosmic neutrinos. 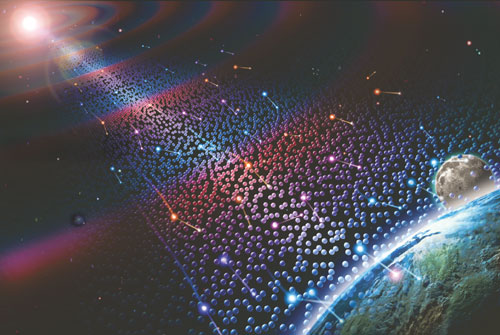 Artist’s concept of neutrinos in space. They are penetrating everything, all the time. Image via jovianarc

Why seek neutrinos? High-energy neutrinos are irresistible to scientists, who believe they are created deep inside some of the universe’s most violent phenomena. According to a UW-Madison statement:

The evidence is important because it heralds a new form of astronomy using neutrinos, the nearly massless high-energy particles generated in nature’s accelerators: black holes, massive exploding stars and the energetic cores of galaxies.

The particles created in these events, including neutrinos and cosmic rays, are accelerated to energy levels that exceed the record-setting earthbound accelerators such as the Large Hadron Collider (LHC) by a factor of more than a million.

They are prized by astrophysicists because the information they hold is pristine, unchanged as the particles travel millions of light-years between their sources and Earth. The ability to study the highest-energy neutrinos promises insight into a host of problems in physics, including how nature builds powerful and efficient particle accelerators in the universe.

Between May 2010 and May 2012, IceCube recorded more than 35,000 neutrinos. However, only about 20 of those neutrino events were clocked at energy levels indicative of astrophysical or cosmic sources. 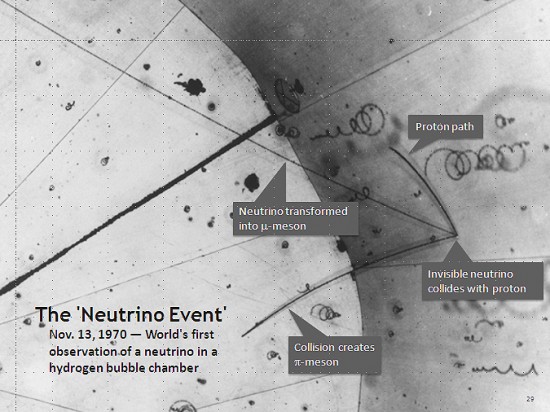 The first use of a hydrogen bubble chamber to detect neutrinos, on November 13, 1970. A neutrino hit a proton in a hydrogen atom. The collision occurred at the point where three tracks emanate on the right of the photograph.

They say the new results are meaningful because, using a different technique, they have reaffirmed the IceCube Observatory’s ability to sample the ghostlike neutrinos:

By instrumenting a cubic kilometer of deep Antarctic ice, scientists were able to make a detector big enough to capture the signature of the rare neutrino collision. When that rare smashup occurs, it creates a muon, which, in turn, leaves a trail of Cherenkov light that faithfully mirrors the trajectory of the neutrino. The ‘optical sonic booms’ created when neutrinos smash into another particle are sensed by the optical sensors that make up the IceCube detector array and, in theory, can be used to point back to a source.

But – while the new observations confirm the existence of astrophysical neutrinos and the means to detect them using the IceCube Observatory – actual point sources of high-energy neutrinos remain to be identified.

In other words, the researchers have not yet been able to pinpoint the sources of the neutrinos.

Albrecht Karle, a UW-Madison professor of physics and a senior author of the Physical Review Letters report, notes that while the neutrino-induced tracks recorded by the IceCube detector have a good pointing resolution, within less than a degree, the IceCube team has not observed a significant number of neutrinos emanating from any single source.

The neutrinos observed in the latest search, however, have energy levels identical to those seen when the observatory sampled the sky of the Southern Hemisphere. That, says Karle, suggests that many of the potential sources of the highest-energy neutrinos are generated beyond the Milky Way. If there were a significant number of sources in our own galaxy, he notes, the IceCube detector would light up when observing the plane of our galaxy — the region where most neutrino-generating sources would likely be found. Karle added:

The plane of the galaxy is where the stars are. It is where cosmic rays are accelerated, so you would expect to see more sources there. But the highest-energy neutrinos we’ve observed come from random directions.

It is sound confirmation that the discovery of cosmic neutrinos from beyond our galaxy is real.

Bottom line: University of Wisconsin, Madison, announced this month that its researchers at the South Pole have helped confirm the detection of cosmic neutrinos, using the the IceCube Neutrino Observatory.