Astronomers were surprised to discover an enormous “cold front” millions of light years in extent and older than the solar system.

A new study looks at a gigantic and resilient “cold front” hurtling through the Perseus galaxy cluster. The researchers used NASA’s Chandra X-ray Observatory to study this cosmic weather system, which spans about two million light years and has been traveling for over 5 billion years, longer than our solar system has been in existence.

Galaxy clusters are the largest and most massive objects in the universe that are held together by gravity. Between the hundreds or even thousands of galaxies in a cluster, there are vast reservoirs of super-heated gas that glow brightly in X-ray light.

The cold front in the Perseus cluster consists of a relatively dense band of gas with a “cool” temperature of about 30 million degrees moving through lower-density hot gas with a temperature of about 80 million degrees. According to the study, published in the April 2018 edition of the peer-reviewed journal Nature Astronomy, the enormous cold front formed about 5 billion years ago and has been traveling at speeds of about 300,000 miles (483,000 km) per hour ever since. 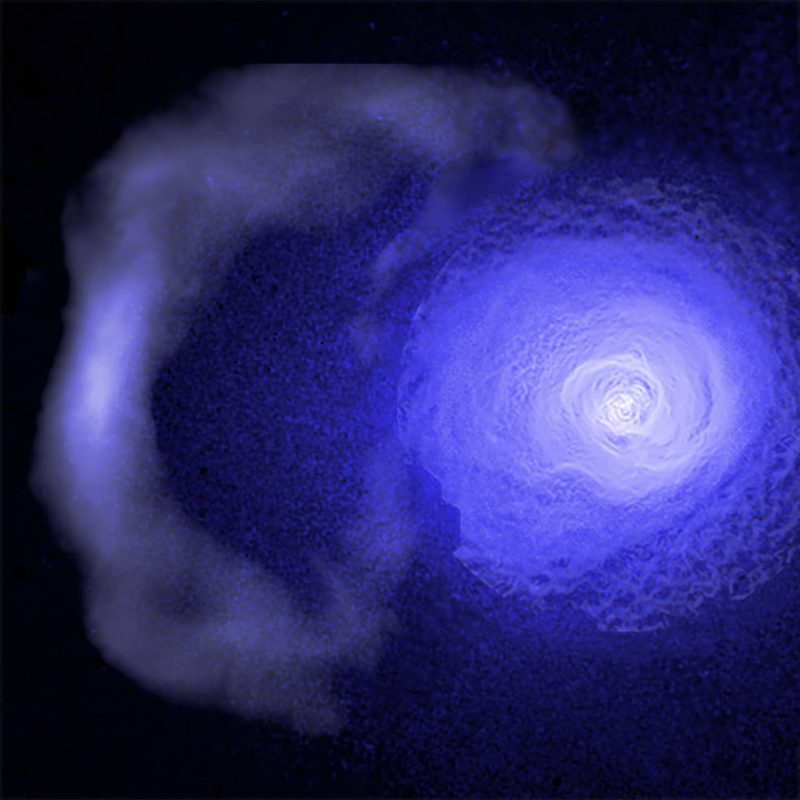 The scientists were surprised to find that the front has remained extremely sharp over the eons, rather than becoming fuzzy or diffuse. Stephen Walker of NASA’s Goddard Space Flight Center led the study. He said in a statement:

The size, age, speed and sharpness of this cold front are remarkable. Everything about this cosmic weather system is extreme.

Cold fronts in the Earth’s atmosphere are driven by rotation of the planet. But those in the atmospheres of galaxy clusters like Perseus are caused by collisions between the cluster and other clusters of galaxies, say the researchers.

These collisions typically occur as the gravity of the main cluster pulls the smaller cluster inward towards its central core. If the smaller cluster makes a close pass by the central core, the gravitational attraction between both structures causes the gas in the core to slosh around like wine swirled in a glass. The sloshing produces a spiral pattern of cold fronts moving outward through the cluster gas. 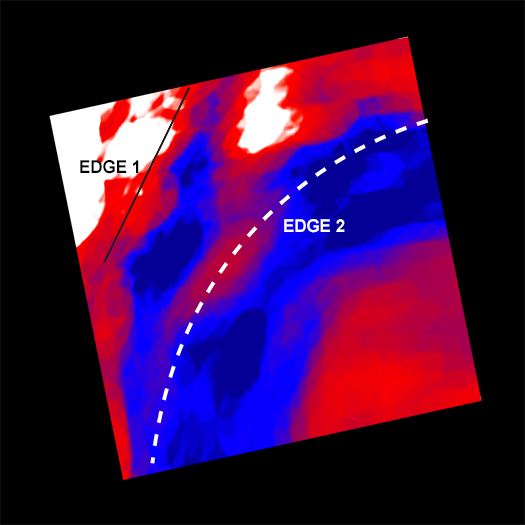 The researchers aren’t sure why the the cold front in Perseus remains sharp, even after billions of years. As the cold front travels through the galaxy cluster, it passes through a harsh environment of sound waves and turbulence caused by outbursts from the supermassive black hole at the center of Perseus. John ZuHone of the Harvard-Smithsonian Center for Astrophysics is a study co-author. He said:

Somehow, in the face of all this bombardment, the cold front edge has survived intact. Rather than being eroded or smoothed out, it has actually instead split into two distinct sharp edges!

The researchers used computer simulations, which suggested that magnetic fields have draped themselves over the cold front, acting almost like a shield against the barrage of forces from the rest of the cluster.

Bottom line: A new study looks at a gigantic, resilient “cold front” hurtling through the Perseus galaxy cluster. The cold front spans about two million light years and has been traveling for over 5 billion years.