Ka-bam! Signs of a giant impact with Jupiter

Scientists used Juno spacecraft data and models of how Jupiter’s inner core should look to probe the giant planet’s early history. They now think an object with 10 times Earth’s mass might have struck Jupiter billions of years ago. 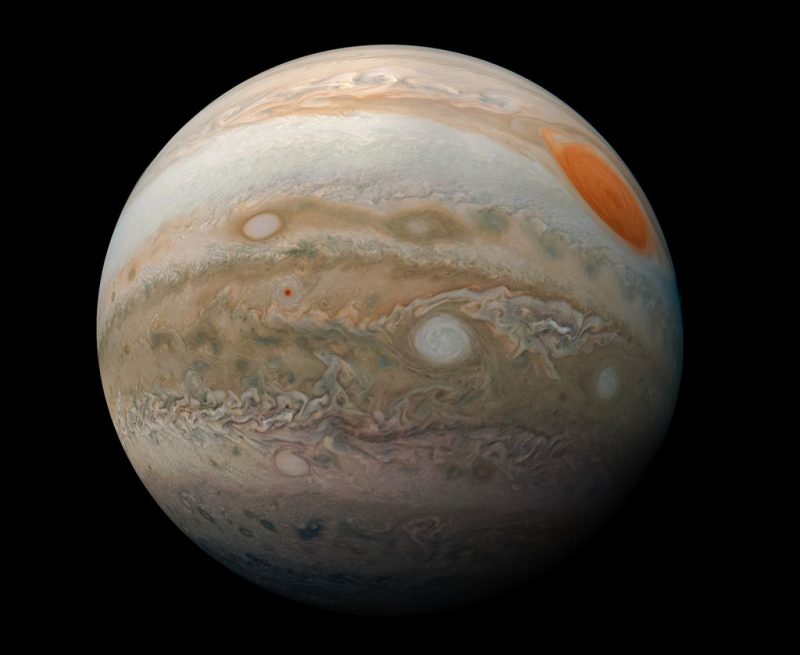 Composite image of Jupiter, made of 3 photographs acquired by NASA’s Juno mission on February 12, 2019, during the spacecraft’s 17th science perijove, the maneuver that pulls Juno close to Jupiter in its off-center orbit. Image via NASA/JPL-Caltech/SwRI/MSSS/Kevin M. Gill.

Did you know there’s a spacecraft in orbit around Jupiter now? NASA’s Juno spacecraft isn’t getting much press, but it is getting results. For example, Juno has measured Jupiter’s gravitational field with what Tristan Guillot of the Observatoire de la Côte d’Azur in Nice, France – writing in Nature – called “exquisite accuracy.” In the article, he’s discussing a peer-reviewed study by Liu et al., published in Nature on August 14, 2019, proposing surprising findings about Jupiter’s core based on Juno gravitational data and observations of the composition of Jupiter’s atmosphere. The new study suggests that a young Jupiter might have collided head-on with another, very massive object, a planetary embryo or would-be planet if no collision had occurred. This object would have needed to have about 10 times Earth’s mass in order to account for what scientists are seeing in Jupiter’s core. That would make the colliding object nearly as massive as planet Uranus, the smallest of the four gas giant planets in our solar system. Guillot wrote that Liu’s team suggests:

… that the primordial cores of the planet and of the embryo would have merged and then partially mixed with Jupiter’s envelope, explaining the structure of the planet seen today.

Like the other gas giants (Saturn, Uranus, Neptune), Jupiter is mostly made of hydrogen and helium. However, as Guillot explained, Jupiter:

… contains a non-negligible proportion of heavier elements in the form of a central core and in the hydrogen–helium envelope. This envelope is fluid and is expected to be largely convective, so it was surprising when Juno revealed that the envelope’s composition is not uniform.

Instead, the core seems to be partially diluted in the envelope, extending to almost half of the planet’s radius. 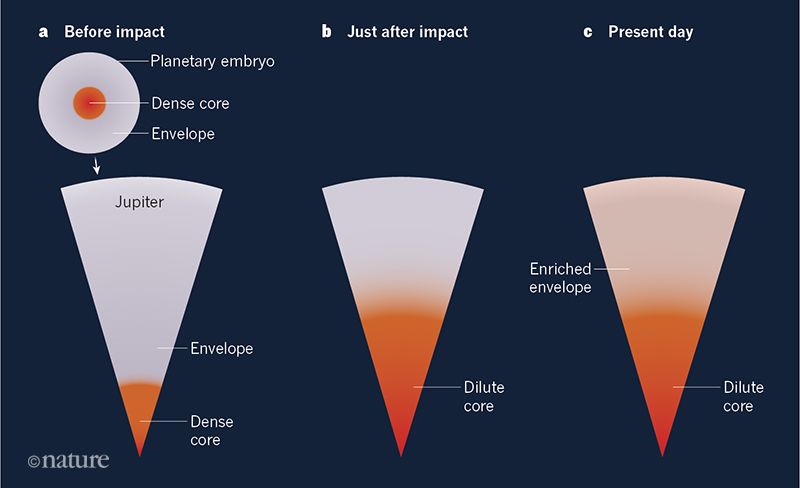 Three phases of Jupiter. Liu et al. propose that the present-day internal structure of Jupiter is the result of a giant impact between the young planet and a planetary embryo that had roughly the mass of Uranus. a) In the authors’ model, before the impact, both Jupiter and the embryo contained a dense central core of heavy elements and a hydrogen–helium envelope. The colors represent the density of material, ranging from low (white) to high (dark orange). b) Just after the impact, the two cores merged and partially mixed with the planet’s envelope to produce a dilute core. c) After subsequent evolution, the dilute core remained, but was partially eroded into the envelope, causing the envelope to be enriched in heavy elements. Image and caption via Nature.

What can explain this strange dilution of the planet’s core? There are several possibilties, but Liu et al. favor the one calling for an impact with Jupiter. Liu and his team write in Nature:

Here we show that a sufficiently energetic head-on collision (giant impact) between a large planetary embryo and the proto-Jupiter could have shattered its primordial compact core and mixed the heavy elements with the inner envelope. Models of such a scenario lead to an internal structure that is consistent with a diluted core, persisting over billions of years.

We suggest that collisions were common in the young solar system and that a similar event may have also occurred for Saturn, contributing to the structural differences between Jupiter and Saturn.

Learn more about this study by reading Tristan Guillot’s article.

By the way, the $1.1 billion Juno mission launched August 5, 2011, and arrived in orbit around Jupiter on July 4, 2016. It’s the farthest space probe ever to be powered by solar arrays. The mission suffered a setback early on, when a planned burn – designed to take the craft from a 53-day orbit to a 14-day orbit – had to be skipped. But NASA has extended its mission to 2021. The spacecraft is expected to stay in its 53-day orbit around Jupiter throughout that time. 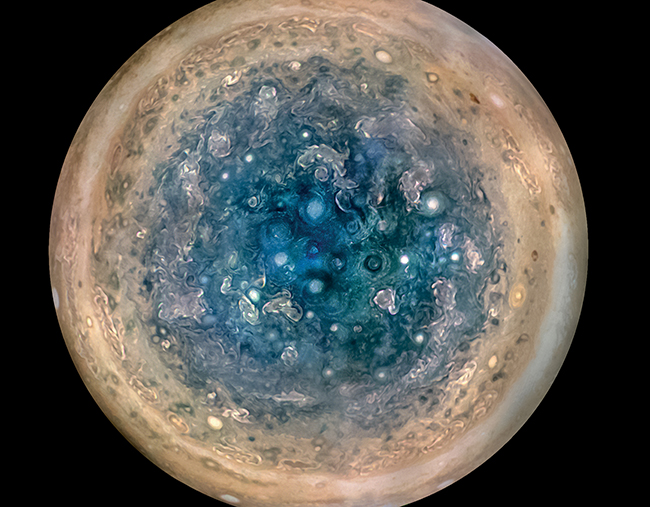 This image shows a view of Jupiter’s south pole, as seen by Juno from an altitude of 32,000 miles (52,000 km). The oval features are cyclones, up to 600 miles (1,000 km) in diameter. Multiple images taken with the JunoCam instrument on three separate orbits were combined to show all areas in daylight, enhanced color, and stereographic projection. Image via NASA/JPL-Caltech/SwRI/MSSS/Betsy Asher Hall/Gervasio Robles.

Bottom line: A new study suggests an object with 10 times Earth’s mass might have struck Jupiter billions of years ago.

Source: The formation of Jupiter’s diluted core by a giant impact