Does the subsurface ocean of Saturn’s moon Enceladus contain any kind of life? Newfound complex organic molecules in its water vapor plumes hint we might not be alone in the solar system. 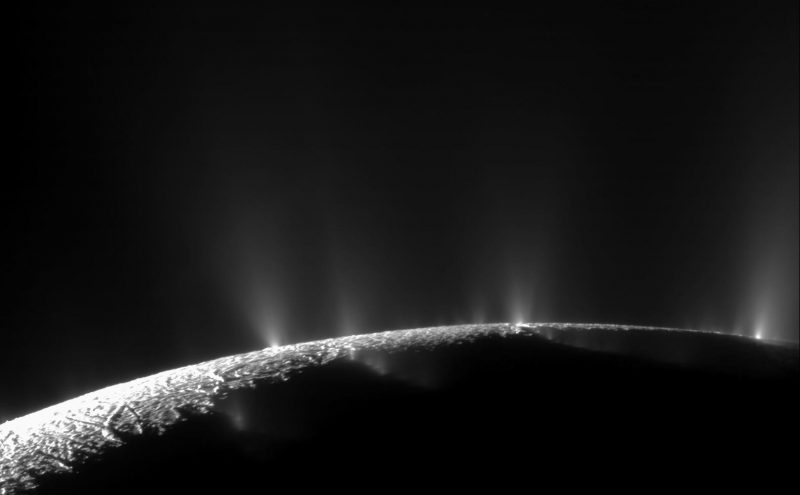 Saturn’s moon Enceladus might be tiny, but it has the potential to help answer one of the biggest questions ever – are we alone? NASA’s Cassini mission studied this enigmatic world up close and found that it is incredibly active, at least geologically, with huge plumes of water vapor erupting though enormous cracks in the surface, from a salty subsurface global ocean below the outer ice crust. Cassini actually flew through those plumes, sampling them for analysis. We already knew that it found water vapor, ice particles, salts, hydrogen and simple organic compounds. Now, new analysis from the Southwest Research Institute (SwRI) published on June 27, 2018, in the peer-reviewed journal Nature – shows that the plumes also contain much more complex organics. This doesn’t mean evidence of life itself – yet – but it more clearly shows that Enceladus’ ocean meets all the requirements for life to exist.

The research team was led by Frank Postberg and Nozair Khawaja of the University of Heidelberg, Germany. As noted by Postberg:

It is the first-ever detection of complex organics coming from an extraterrestrial water-world. 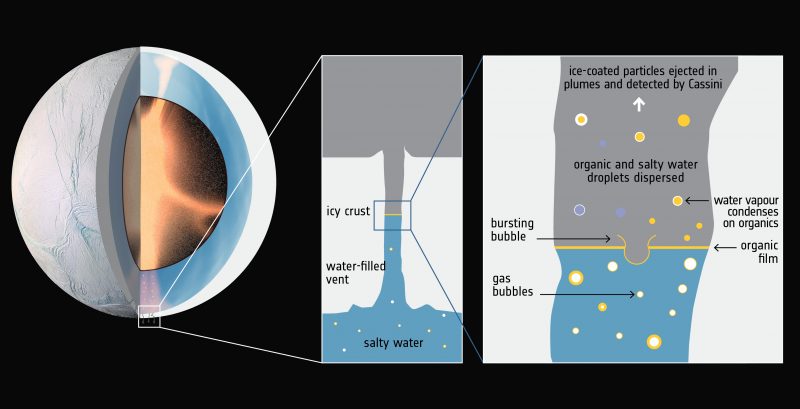 Diagram of organic-rich bubbles rising to the surface from deeper in the ocean. Image via ESA/F. Postberg et al (2018).

The organics are quite large and complex, as Khawaja added:

Scientists at SwRI analyzed the mass spectrometry data from Cassini. As explained by Dr. Christopher Glein, a space scientist specializing in extraterrestrial chemical oceanography (and co-author of the new paper):

We are, yet again, blown away by Enceladus. Previously we’d only identified the simplest organic molecules containing a few carbon atoms, but even that was very intriguing. Now we’ve found organic molecules with masses above 200 atomic mass units. That’s over ten times heavier than methane. With complex organic molecules emanating from its liquid water ocean, this moon is the only body besides Earth known to simultaneously satisfy all of the basic requirements for life as we know it.

This does not mean that life has been discovered on Enceladus. But it does mean that the conditions for life may exist there, in the moon’s subsurface ocean. 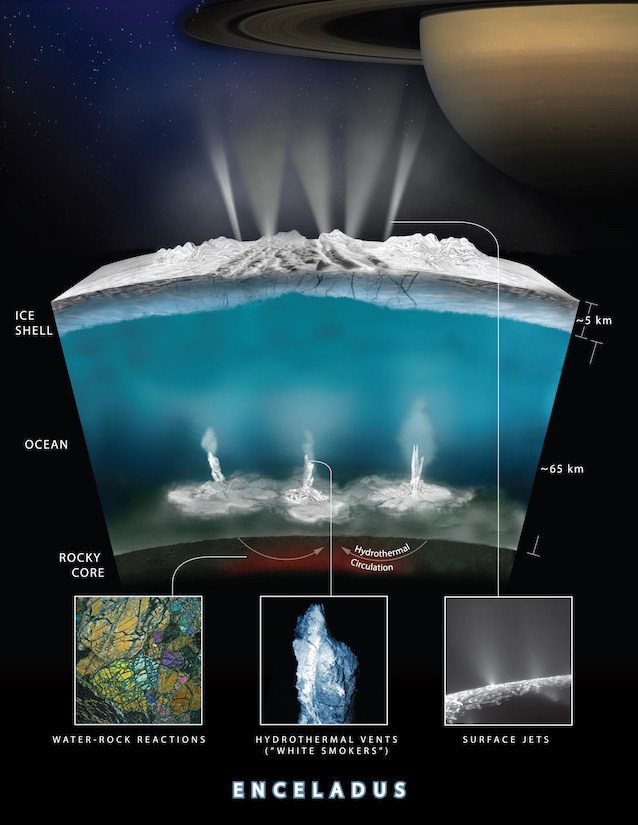 Diagram of an interior cross-section of the crust of Enceladus, showing hydrothermal vents on the ocean floor and plumes of water vapor erupting through cracks on the surface. Image via NASA-GSFC/SVS/NASA/JPL-Caltech/Southwest Research Institute.

The heavy organic fragments discovered are thought to be remnants of even larger ones of perhaps thousands of atomic mass units. The largest ones were broken into smaller fragments when they collided with Cassini’s dust-analysing instrument at speeds of about 18,640 miles per hour (30,000 kilometers per hour). Such large organic molecules can only be created by complex chemical processes, including life or hydrothermal activity.

The discovery of such complex organics is exciting, especially when they are found originating from a warm water ocean. Organics like this can be formed abiotically, without life, or can be relics of organisms themselves. In the case of Enceladus, we don’t know which it is yet, or both, but it is tantalizing. There is also evidence from Cassini for active hot geothermal vents on the ocean floor, just like ones on Earth. Here, such vents are teeming with a variety of small organisms. Could the same be true for Enceladus? The Cassini mission itself may be over now, but the science continues, as noted by Glein:

Even after its end, the Cassini spacecraft continues to teach us about the potential of Enceladus to advance the field of astrobiology in an ocean world. This paper demonstrates the value of teamwork in planetary science. The INMS and CDA teams collaborated to reach a deeper understanding of the organic chemistry of Enceladus’ subsurface ocean than would be possible with only one data set.

The molecular hydrogen previously detected in the plumes is another important clue, as it is thought to form by geochemical interactions between water and rocks in hydrothermal environments. According to SwRI’s Dr. Hunter Waite, INMS principal investigator and a coauthor of the new paper:

Hydrogen provides a source of chemical energy supporting microbes that live in the Earth’s oceans near hydrothermal vents. Once you have identified a potential food source for microbes, the next question to ask is “what is the nature of the complex organics in the ocean?” This paper represents the first step in that understanding – complexity in the organic chemistry beyond our expectations! 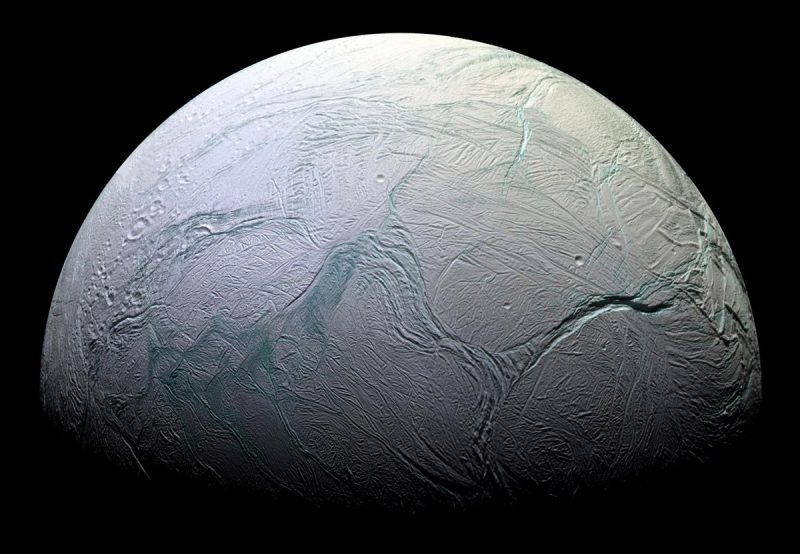 A global view of Enceladus. Image via NASA/JPL/Space Science Institute.

The results also suggest a thin organic-rich “film” on top of the ocean. Bubbles of gas, rising upward through tens of miles of ocean water, could bring up organic material where they form a thin film floating on the ocean surface just beneath the outer icy shell. From the abstract:

Here we report observations of emitted ice grains containing concentrated and complex macromolecular organic material with molecular masses above 200 atomic mass units. The data constrain the macromolecular structure of organics detected in the ice grains and suggest the presence of a thin organic-rich film on top of the oceanic water table, where organic nucleation cores generated by the bursting of bubbles allow the probing of Enceladus’ organic inventory in enhanced concentrations.

Not only are these findings exciting in themselves, but they also have implications for the future exploration of Enceladus, and return mission concepts are now on the drawing boards. As noted by Glein:

The paper’s findings also have great significance for the next generation of exploration. A future spacecraft could fly through the plumes of Enceladus, and analyze those complex organic molecules using a high-resolution mass spectrometer to help us determine how they were made. We must be cautious, but it is exciting to ponder that this finding indicates that the biological synthesis of organic molecules on Enceladus is possible. 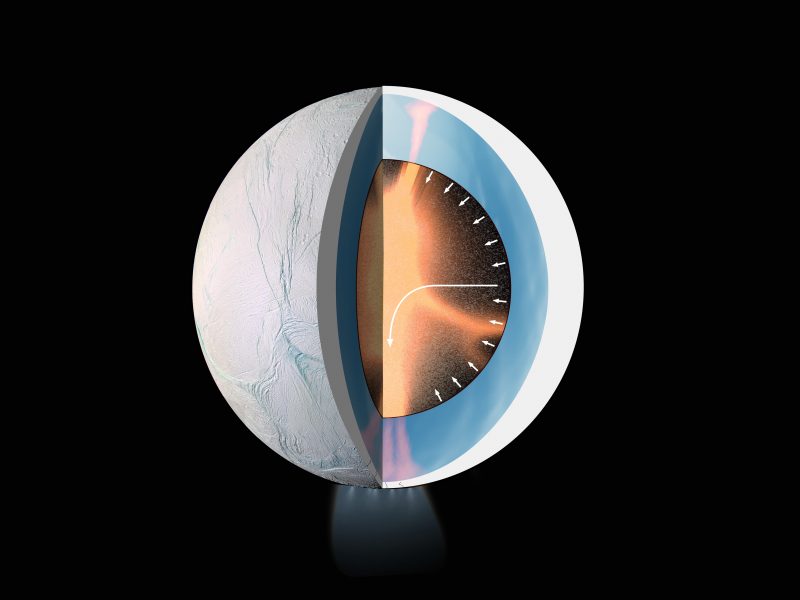 Diagram depicting interior of Enceladus. Water from the ocean below, along with organics, makes its way to the surface through cracks in the outer ice shell. Image via NASA/JPL-Caltech/Space Science Institute/LPG-CNRS/Nantes-Angers/ESA.

Bottom line: Thanks to Cassini, Enceladus has long been regarded as one of the best places in the solar system to look for evidence of alien life. Is there anything swimming in that warm but dark ocean? Perhaps, and this new discovery of complex organics strengthens the possibility. Even if only something like bacteria, finding life in Enceladus’ ocean would be one of the most exciting discoveries in history.

Source: Macromolecular organic compounds from the depths of Enceladus

Via SwRI and ESA