The close pass of Comet Siding Spring to Mars was exciting! Closest approach was October 19. Watch for photos from the event here at EarthSky.org. 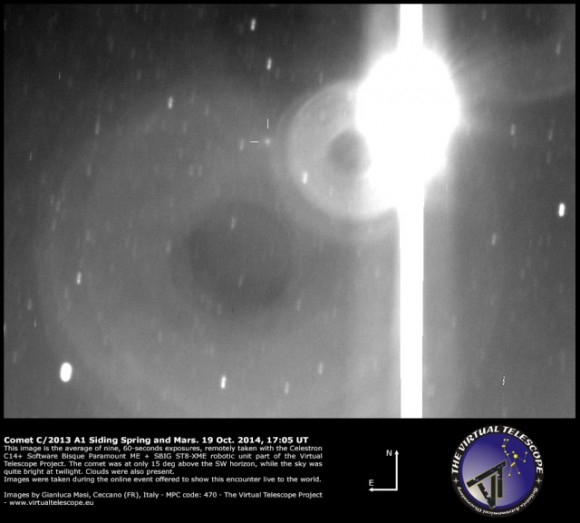 UPDATE OCTOBER 18, 2014. Hurtling through space at about 35 miles (56 kilometers) per second, Comet Siding Spring (C/2013 A1) will sweep very close to the planet Mars today. It will be less than one-tenth the distance of any known previous earthly comet flyby on October 19 at 18:28 UTC, or 1:28 p.m. Central Daylight Time in North America. The comet won’t collide with Mars, but its nucleus is expected to come within 82,000 miles (132,000 kilometers) of the Red Planet, or about one-third the moon’s distance from Earth. The comet’s coma of gas and dust may engulf Mars! In way of contrast, the closest comet to swing by Earth in recorded history was Lexell’s Comet, at six times the moon’s distance from Earth (6 x 384,400 kilometers or 238,855 miles) in the year 1770. Follow the links below to learn more about the comet that’s buzzing Mars today!

How to see Mars from Earth (and the comet from Mars)

When did astronomers discover Comet C/2013 A1 Siding Spring?

How will the comet look from Mars?

Will I be able to see this comet in Earth’s night sky?

UPDATE OCTOBER 9, 2014. This week, NASA announced its extensive preparations for the one of the most anticipated astronomical events of this year, the close passage of Comet C/2013 A1 Siding Spring to the planet Mars on October 19, 2014. The comet’s tiny nucleus, or core, will miss Mars by only about 82,000 miles (132,000 kilometers) on that date. It will not strike Mars, but, as comets travel through space, they leave behind a long trail of dust particles. This trail of debris might be wide enough to reach Mars and encounter its thin atmosphere … or might miss it, too. If the comet dust does reach Mars, it has the potential to damage our spacecraft in orbit there, which is why NASA earlier took steps earlier this year to protect its Mars orbiters. Now, NASA has announced extensive plans to study the comet with its spacecraft fleet, but also some Earth- and sun-orbiting craft. It sounds like they’re getting excited about it! John Grunsfeld, astronaut and associate administrator for NASA’s Science Mission Directorate in Washington, said:

This is a cosmic science gift that could potentially keep on giving, and the agency’s diverse science missions will be in full receive mode. This particular comet has never before entered the inner solar system, so it will provide a fresh source of clues to our solar system’s earliest days.

What with the wonderful Rosetta mission of the European Space Agency producing so many exciting images and results, we can only hope and imagine that NASA will try to out-do itself to do the same with the Comet Siding Springs/ Mars encounter. Click here to read more about NASA’s plans to observe Comet Siding Spring. 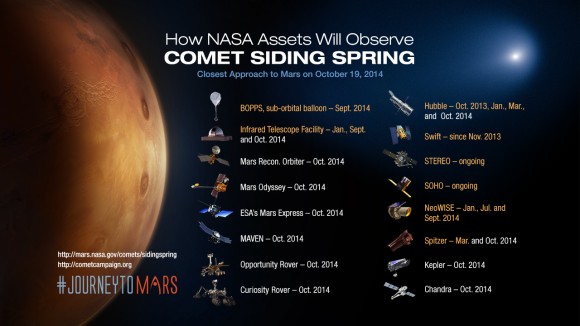 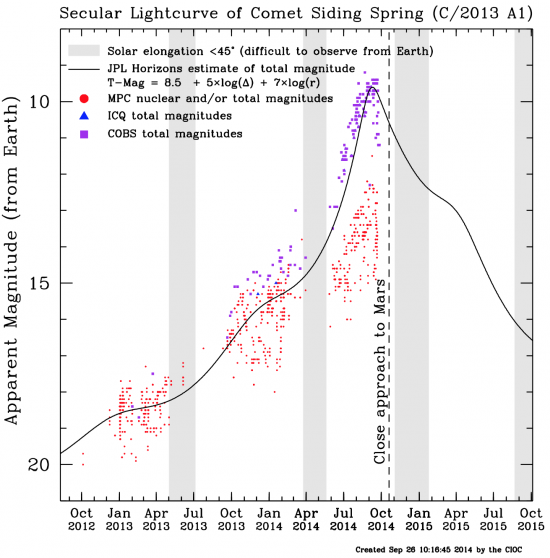 Read more about this image at cometcampaign.org

UPDATE OCTOBER 5, 2014. The apparent magnitude (brightness) of Comet Siding Spring has taken a sudden plunge! What does this mean? No one knows. A good place to follow the situation is the website cometcampaign.org, which is run by professional astronomers and which is posting a current status for the comet every so often. As explained on this website:

As Comet ISON demonstrated repeatedly last year, comets can be highly unpredictable, especially when on their first pass through the inner solar system like our beloved comet Siding Spring. Thus, the downward trend of data points over the past few days could be significant, or it might be nothing at all.

What will happen? Again … no one knows. 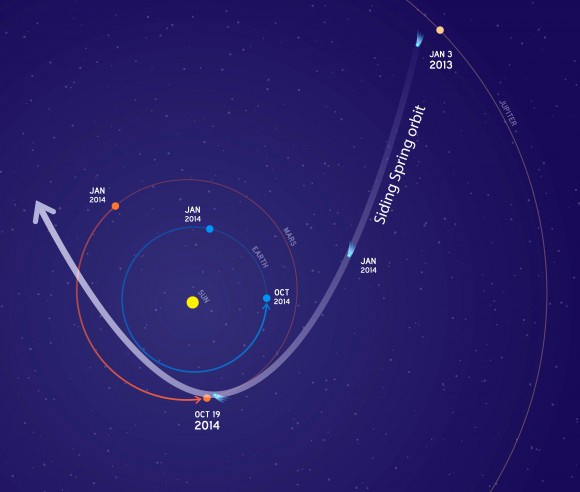 An illustration of the inner part of the orbit of comet C/2013 A1 Siding Spring. Image via NASA/JPL.

NASA takes steps to keep its spacecraft safe. Comet Siding Spring’s icy core, or nucleus, will not strike Mars, but the high speed of the comet relative to Mars means that even the smallest grain of dust from the comet could cause “significant damage” to our spacecraft, NASA says.

There are three live NASA spacecraft orbiting Mars now, and one mission from India. The Mars Reconnaissance Orbiter (MRO) and Mars Odyssey spacecraft have been in orbit around Mars for some time. MAVEN – the Mars Atmosphere and Volatile EvolutioN mission – arrived at Mars on September 21, 2014. The Mars Orbiter Mission (MOM) successfully entered Mars’ orbit on September 24, 2014, making India the first Asian country to reach the Red Planet. I don’t know what India plans for MOM during the Comet Siding Spring flyby, but NASA plans to have all three of it orbiters positioned on the opposite side of Mars from the comet, when the comet passes by. Rich Zurek, chief scientist for the Mars Exploration Program at NASA’s Jet Propulsion Laboratory in Pasadena, California, said in a NASA release on July 25:

Three expert teams have modeled this comet for NASA and provided forecasts for its flyby of Mars. The hazard is not an impact of the comet nucleus, but the trail of debris coming from it. Using constraints provided by Earth-based observations, the modeling results indicate that the hazard is not as great as first anticipated. Mars will be right at the edge of the debris cloud, so it might encounter some of the particles — or it might not.

NASA says the period of greatest risk will come not when the comet is closest to Mars, but about 90 minutes later. Space engineers expect the risk period to last about 20 minutes, during which time Mars will come closest to the center of the widening dust trail left behind by Comet Siding Spring. NASA said on July 25:

NASA’s Mars Reconnaissance Orbiter (MRO) made one orbit-adjustment maneuver on July 2 as part of the process of repositioning the spacecraft for the Oct. 19 event. An additional maneuver is planned for Aug. 27. The team operating NASA’s Mars Odyssey orbiter is planning a similar maneuver on Aug. 5 to put that spacecraft on track to be in the right place at the right time, as well.

NASA’s Mars Atmosphere and Volatile Evolution (MAVEN) spacecraft was on its way to the Red Planet when NASA was adjusting the orbits of its other Mars craft, in preparation for the comet flyby. The MAVEN team is planning to conduct a precautionary maneuver on October 9, prior to the start of the mission’s main science phase in early November.

NASA’s NEOWISE mission captured this image of the comet about a year after its discovery, on January 16, 2014. At that time, the comet was 355 million miles (571 million km) from the sun. Image via NASA/JPL-Caltech. 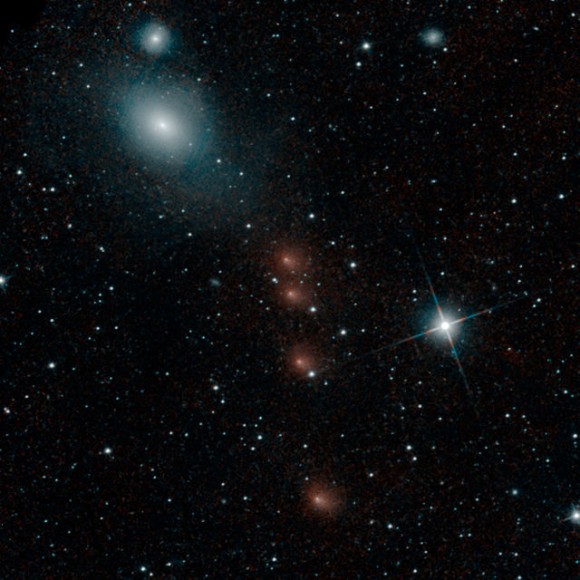 By late July 2014, we could see the comet much better. That’s when NASA’s NEOWISE mission caught four shots of Comet Siding Spring, as it moved in front of the star background, and combined them into this single image. Read more about this image from NASA.

When did astronomers discover Comet C/2013 A1 Siding Spring? Astronomer Rob McNaught discovered the on January 3, 2013 using the Uppsala Schmidt Telescope at Siding Spring Observatory in Australia. At the time of discovery it was 7.2 AU (7.2 times Earth’s distance) from the sun. Shortly after its discovery, astronomers in Arizona confirmed the comet in images taken a month earlier as part of the Catalina Sky Survey. Those early observations, plus others from around the world, quickly showed that the comet has a highly inclined, retrograde orbit around the sun. We learned that the comet won’t come very close to the sun at its perihelion (closest point to the sun), no closer than 140 million miles (in contrast to Earth’s average distance of about 92 million miles). So the comet will not come near Earth. But its perihelion is just about at the orbit of Mars. This means the comet will be at its most active around the time it encounters Mars.

By the way, Comet C/2013 A1 Siding Spring probably took millions of years to come into the inner solar system from the Oort cloud. Once it passes closest to the sun and heads back out to deep space, we will not see it again. 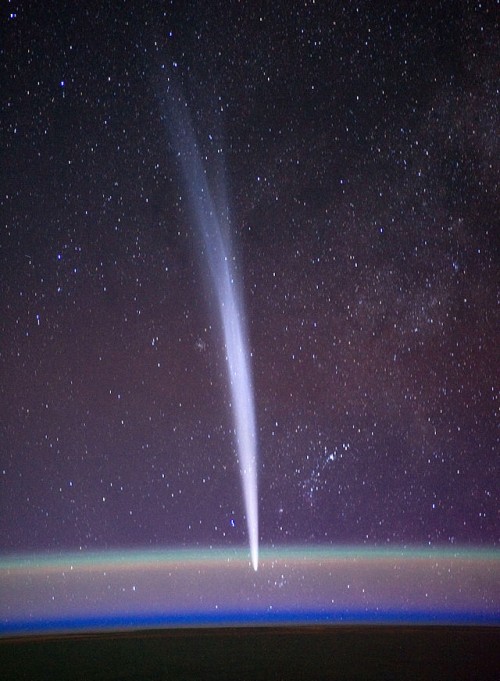 This is not Comet C/2013 A1 Siding Spring. It’s Comet Lovejoy, seen from the International Space Station in December 2011, near Earth’s horizon (behind airglow). How will Comet Siding Spring look from Mars on October 19, 2014? Maybe our spacecraft will get some images, but, since the craft aren’t designed for night sky imaging, they likely won’t look this awesome. Comet Lovejoy photo via NASA.

How will the comet look from Mars? No one knows for sure how the comet will look – how long its tail will be – until the comet actually sweeps past Mars.

… Comet Siding Spring is going to put on one helluva show as seen from Mars. As calculated by small-body aficionado Bill Gray, the comet will approach Mars from the south and sweep into its northern-hemisphere skies over just a few hours.

Hopefully, some of the NASA spacecraft will be able to capture its picture. Although Mars’ atmosphere is thinner than Earth’s, it is thick enough to protect the Opportunity and Curiosity rovers that are transmitting from Mars surface, NASA has said, “even if dust particles from the comet hit the atmosphere and form into meteors.” What a sight that would be! NASA also said:

Rover cameras may be used to observe the comet before the flyby, and to monitor the atmosphere for meteors while the comet’s dust trail is closest to the planet.

In the meantime, NASA also plans to study the comet with its orbiters in the days before and after the comet’s flyby. They’ll use instruments on the Mars orbiters to study the comet nucleus, the coma surrounding the nucleus, and the tail of Siding Spring, as well as the possible effects on the Martian atmosphere. MAVEN, in particular, will study gases coming off the comet’s nucleus into its coma as it is warmed by the sun. MAVEN also will look for effects the comet flyby may have on the planet’s upper atmosphere and observe the comet as it travels through the solar wind. 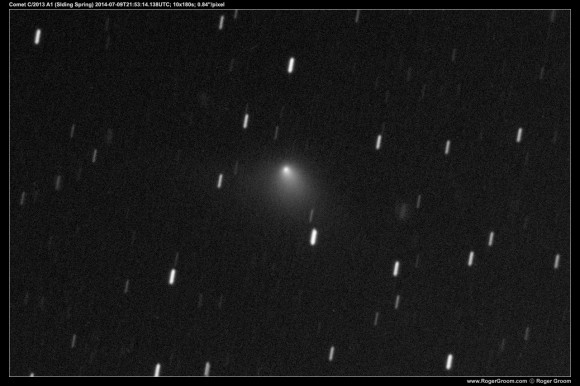 Will I be able to see this comet in Earth’s night sky? Despite the spectacular show from Mars, we on Earth will not be able to see this comet with the eye alone. However, southern hemisphere observers with telescopes have been seeing it for some time now, and some have captured the comet’s picture. Click here for info on the position of Comet C/2013 A1 Siding Spring.

On the other hand, on October 19, 2014 – the night of the comet’s Mars encounter – you will be able to see Mars. I’ll be up in the early evening, located more or less in the direction toward the center of our Milky Way galaxy. That’s a star-rich region of the heavens, but Mars’ reddish color should help you spot it. EarthSky’s planet guide will tell you more.

Bottom line: The tiny nucleus of Comet C/2013 A1 Siding Spring will not strike Mars when it comes closest on October 19, 2014. But material shed by the comet could damage our spacecraft in orbit around the Red Planet. NASA is taking steps now to prevent damage to its orbiting spacecraft.