New discoveries about Ceres’ mysterious bright spots suggest that a strict division between comets and asteroids is no longer realistic. 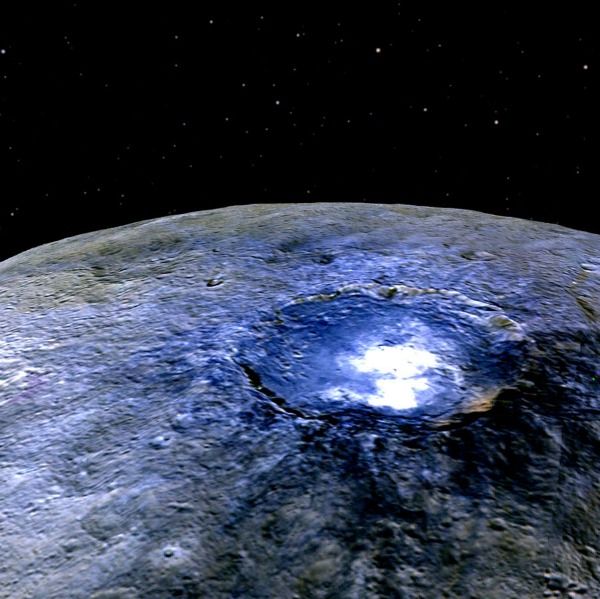 When Guiseppe Piazzi reported his observations of a minor planet in 1801, he originally thought it might be a comet. But follow-up observations by fellow astronomers suggested that Ceres was actually an asteroid. So it’s somewhat ironic that the latest results from NASA’s Dawn mission suggest this asteroid is confusingly similar to a comet.

Dawn has found a number of mysterious features on Ceres so far, including bright white spots on its surface. Its latest results suggest that these are salts left behind as ice vaporised from the surface by sublimation – a process often seen in comets. They also suggest Ceres may have formed far away from its current location in orbit between Mars and Jupiter. This would be surprising as many astronomers believe that a key difference between comets and asteroids is that asteroids form closer to the sun.

Ceres is the largest asteroid we know of – it is also classified as a dwarf planet. Its bright spots were first discovered when Dawn started orbiting Ceres in 2014, the largest at a latitude of around 25°N. There was intense speculation about what these features were, as they had the characteristics of ice. The Herschel Space Observatory later found that water vapour was being produced at specific locations on Ceres.

It therefore seemed that Ceres was acting like a comet, with ice-rich regions releasing dust and vapour during daylight hours. If that were the case, then ice might be a major component of the asteroid, buried below a surface of dust and rubble.

But the two new studies (see here and here), using information from different instruments on the Dawn spacecraft, did not record any ice on the surface. However, one article speculates that ice may still be buried just below the surface while the other suggests that water bound in minerals is abundant.

The researchers also investigated the bright feature at the bottom of Occator Crater, the brightest of the white spots, and concluded that they may be hydrated magnesium salts. The salts are deposits left behind from recent sublimation of water ice that have not yet been covered by soil. Other bright spots, although not as prominent, may also be salt deposits, but that material is likely to be older.

The researchers also identified a mixture of minerals on the surface of Ceres, which they think are ammonia-bearing clay minerals and magnesium carbonate. The clay minerals could have been produced by silicates reacting with ammonia ice. However, if Ceres had formed where it is now, it would not have been able to pick up any ammonia ice to enable such a reaction, because the ice would not be stable.

This means that Ceres may have originally formed in the Kuiper Belt on the outskirts of the solar system and then scattered inwards as the giant planets migrated outwards. Alternatively, Ceres could have formed more or less where it is, and incorporated nitrogen-containing organic molecules, which, like the water ice, were transported inwards from beyond Neptune. 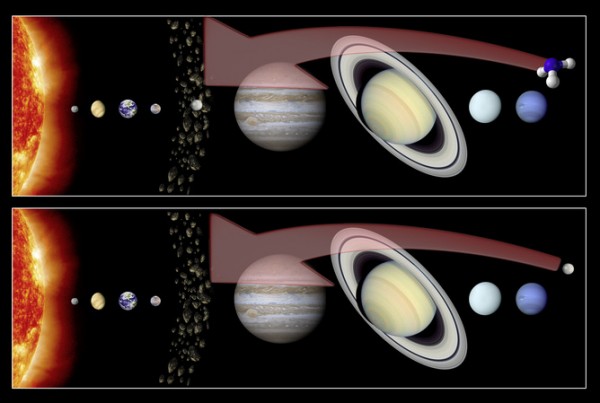 Did Ceres form in the main belt and incorporate ammonia from the outer solar system or did Ceres itself form there Image credit: L.Giacomini

While this might not sound all that significant, it does have quite profound ramifications for our understanding of how material has been mixed to form planets, minor planets, comets and Kuiper Belt Objects.

This year has been an amazing one for small icy bodies. Images from the New Horizons mission to Pluto have shown us the variety of landscapes that can be sculpted on an icy surface. Similarly, pictures of the surface of comet 67P Churyumov Gerasimenko taken by Rosetta have revealed canyons and pits probably caused by fracturing and ice sublimation.

Now we can add a third small body where a combination of ice, water and salts have left behind an environment in which there is the potential for an active, sub-surface chemistry that might, eventually, result in formation of complex molecules. It is also becoming more clear than ever that strict division between comets and asteroids is no longer realistic, and that they represent a spectrum of objects of varying activity and orbit.

Just one last word about the surface of Ceres. I might not be much of a farmer – but I’m fairly certain that magnesium salts and nitrogen-bearing clays are important ingredients in a good, rich soil for raising crops. So naming Ceres after a harvest deity was more appropriate than Piazzi could have imagined!