Even as the long-lived Cassini spacecraft gears up for its last moments at Saturn, it’s preparing for a final long-distance look at Titan, Saturn’s large moon, on September 11.

This article was originally published at AmericaSpace.com. Reprinted with permission.

There are now fewer than five orbits left in the Grand Finale until Cassini’s awe-inspiring mission at Saturn comes to an end. With each remaining orbit, Cassini comes closer to plunging into Saturn’s atmosphere, never to be heard from again. Saturn’s largest moon, Titan, assists the spacecraft during this phase of the mission, nudging on it with its gravity to keep Cassini in the right orbits for when it dives between the innermost rings and the planet itself. And now those final moments are almost here.

While there no more close passes of Titan awaiting Cassini, the spacecraft will get a long-distance view again on September 11, just four days before the mission ends. Cassini made many repeated flybys of Titan during its mission, 127 over 13 years, revealing it to be one of the most bizarre and incredible worlds in our solar system, with its liquid methane/ethane rain, rivers, lakes and seas. In 2005, Cassini released the Huygens probe, which landed on Titan’s surface, sending back the first-ever images from Titan’s surface. The last close flyby was on April 22, 2017. Cassini used Titan’s gravity to help push it into the right orbits, and even to fly past other moons such as Enceladus.

NASA has just released a new video (above) summarizing the amazing findings that Cassini has made at Titan. Titan is a world that in some ways reminds us of Earth, yet is also utterly alien. 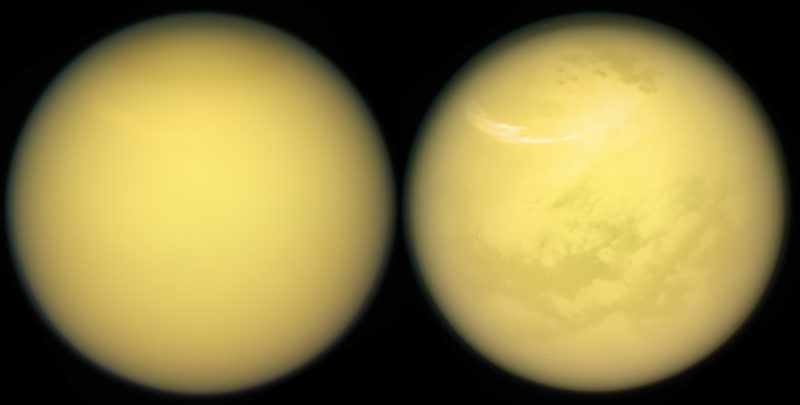 Now that we’ve completed Cassini’s investigation of Titan, we have enough detail to really see what Titan is like as a world, globally.

Previously, Cassini had seen the “magic islands,” unusual patches in some of the seas which seemed to appear and then disappear again. During the most recent flyby, none were seen again however. The features are now thought to most likely be patches of nitrogen bubbles. 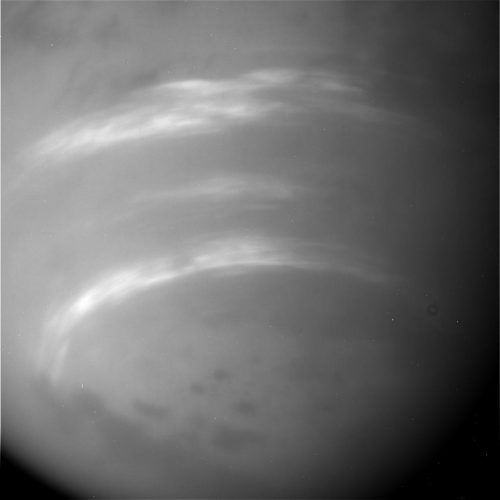 Raw image of bright, wispy methane clouds seen in Titan’s northern hemisphere by Cassini on May 7, 2017. Image via NASA/JPL-Caltech/SSI/AmericaSpace.

There are still mysteries to be solved on Titan, but those will need to wait for additional future missions, being tentatively planned now, such as an orbiter, a floating probe in one of the lakes or seas or even a submersible probe. It is even conceivable that some form of primitive life could exist on Titan, but it would be unlike anything seen before on Earth. 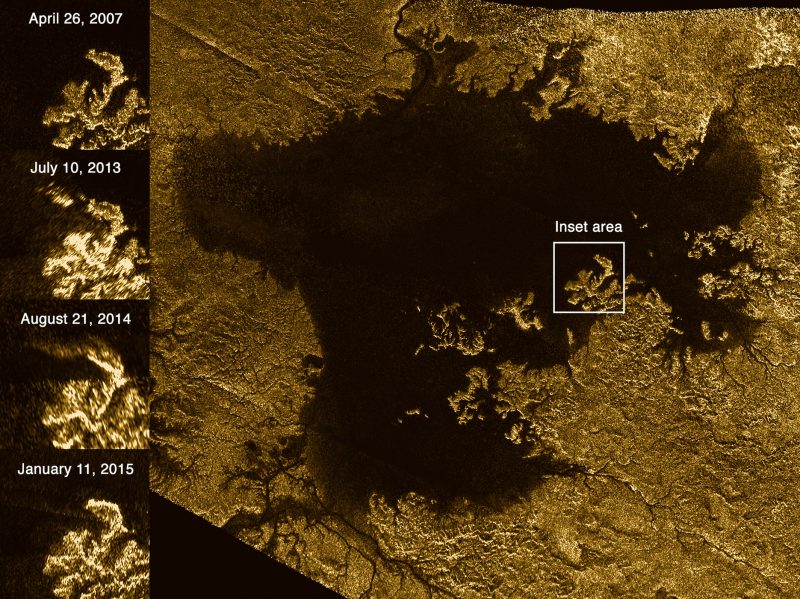 Radar image from Cassini of Ligeia Mare, the second-largest methane/ethane sea on Titan, near the north pole. Image via NASA/JPL-Caltech/ASI/Cornell/AmericaSpace.

During Cassini’s last close flyby of Titan, the radar imaged a long swath of the surface that included terrain first seen on the first Titan flyby in 2004. “It’s pretty remarkable that we ended up close to where we started,” said Steve Wall, deputy lead of Cassini’s radar team at NASA’s Jet Propulsion Laboratory in Pasadena, California. “The difference is how richly our understanding has grown, and how the questions we’re asking about Titan have evolved.”

All of Cassini’s raw images can be seen here on the mission website. 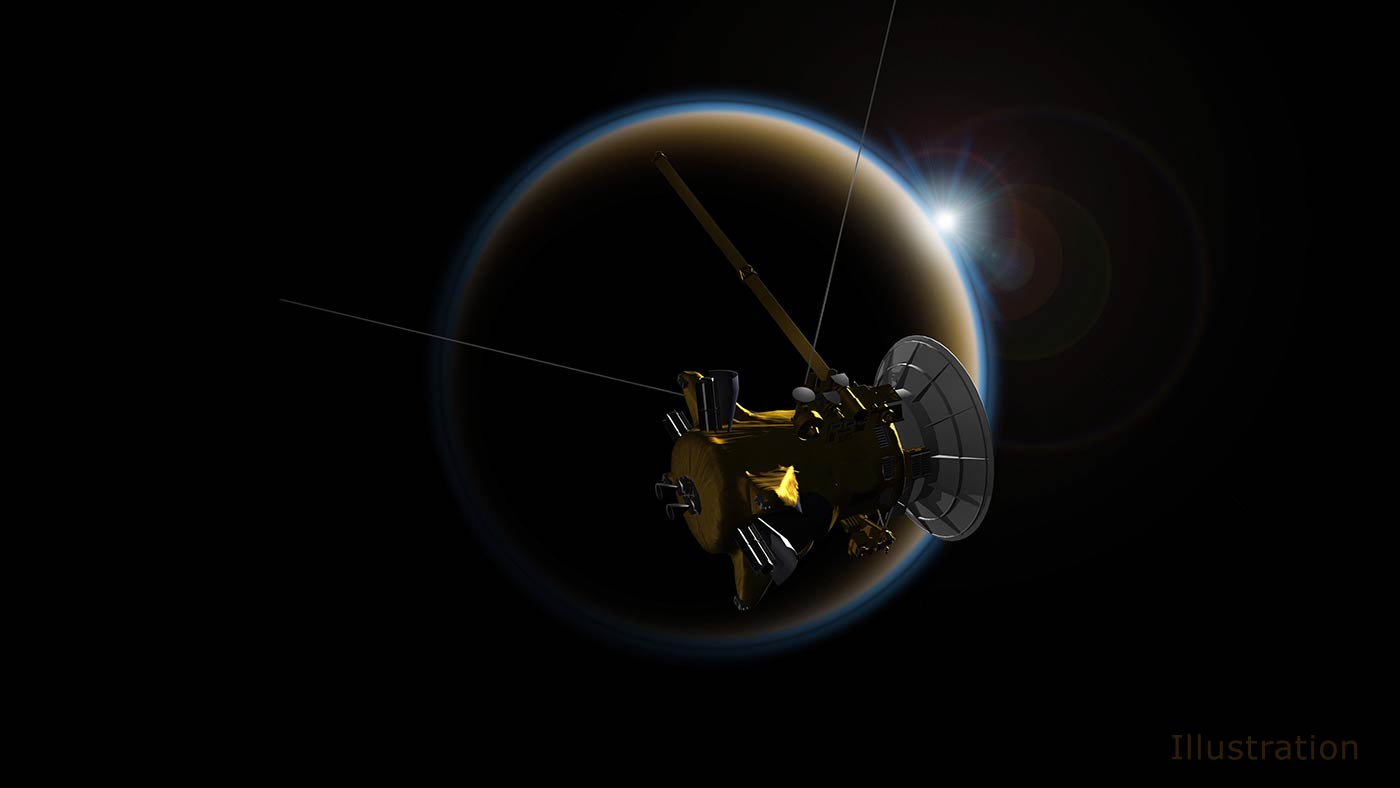 Artist’s concept of Cassini’s final flyby of Titan on April 22, 2017. Image via NASA/JPL-Caltech/AmericaSpace. 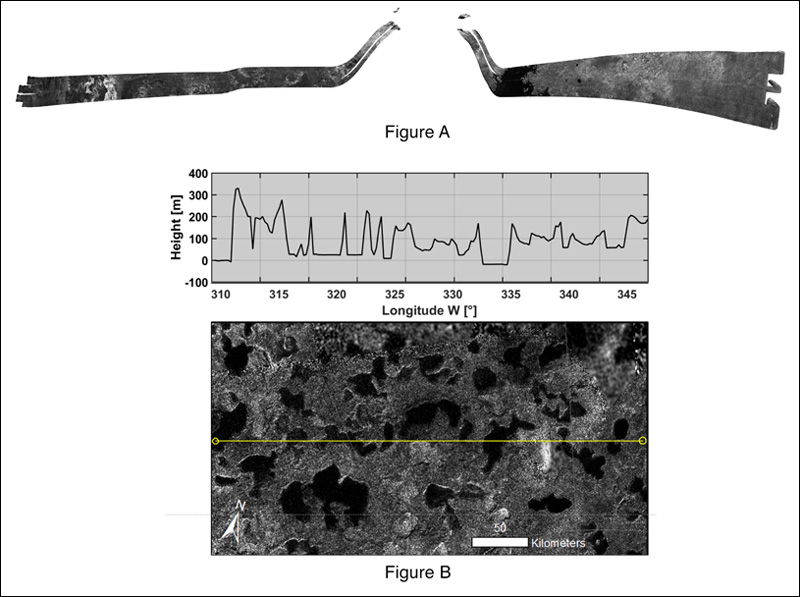 Bottom line: The Cassini spacecraft is in its final five orbits of Saturn, gearing up for its Grand Finale at Saturn, when it’ll plunge into that planet’s thick atmosphere on September 15. Just days before that, it’ll acquire a final long-distance look at Titan, Saturn’s large moon, on September 11.