Most comets become active only when near the sun. This one is active, but distant, between the orbits of Saturn and Uranus, where sunlight is 1/225th as bright as seen from Earth. 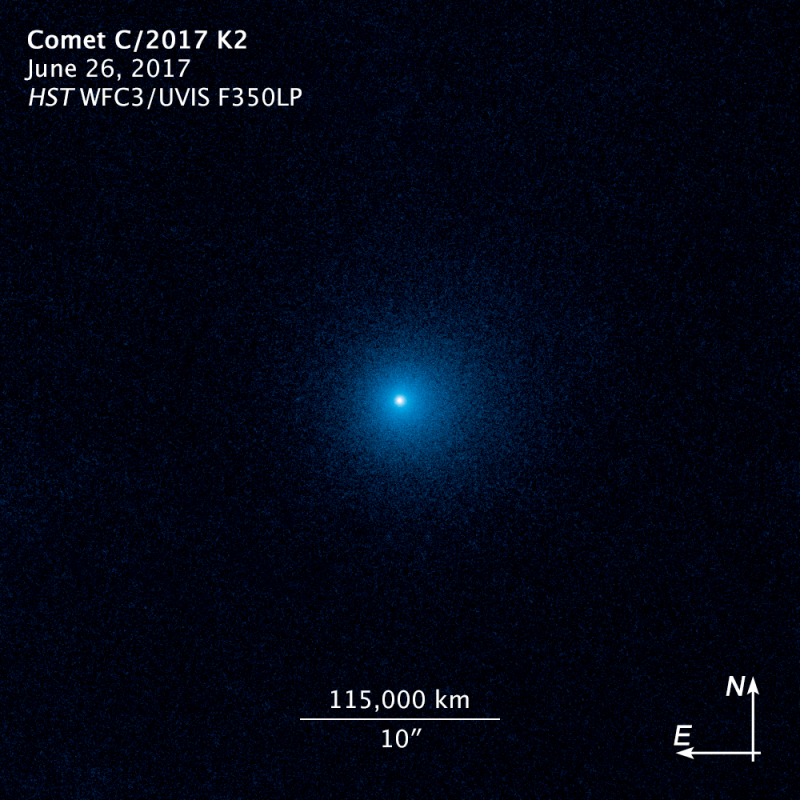 Astronomers released these images on September 28, 2017 of comet C/2017 K2 PANSTARRS, a solitary frozen traveler that’s been journeying for millions of years toward the the inner solar system. HubbleSite said:

The wayward vagabond, a city-sized snowball of ice and dust called a comet, was gravitationally kicked out of the Oort Cloud, its frigid home at the outskirts of the solar system. This region is a vast comet storehouse, composed of icy leftover building blocks from the construction of the planets 4.6 billion years ago.

The comet is so small, faint, and far away that it eluded detection. Finally, in May 2017, astronomers using the Panoramic Survey Telescope and Rapid Response System (Pan-STARRS) in Hawaii spotted the solitary intruder at a whopping 1.5 billion miles away – between the orbits of Saturn and Uranus. The Hubble Space Telescope was enlisted to take close-up views of the comet …

The comet is record-breaking because it is already becoming active under the feeble glow of the distant sun. Astronomers have never seen an active inbound comet this far out, where sunlight is merely 1/225th its brightness as seen from Earth. Temperatures, correspondingly, are at a minus 440 degrees Fahrenheit. Even at such bone-chilling temperatures, a mix of ancient ices on the surface – oxygen, nitrogen, carbon dioxide, and carbon monoxide – is beginning to sublimate and shed as dust. This material balloons into a vast 80,000-mile-wide (130,000-km-wide) halo of dust, called a coma, enveloping the solid nucleus.

Astronomers will continue to study K2 as it travels into the inner solar system. It’ll make its closest approach to our sun in 2022. 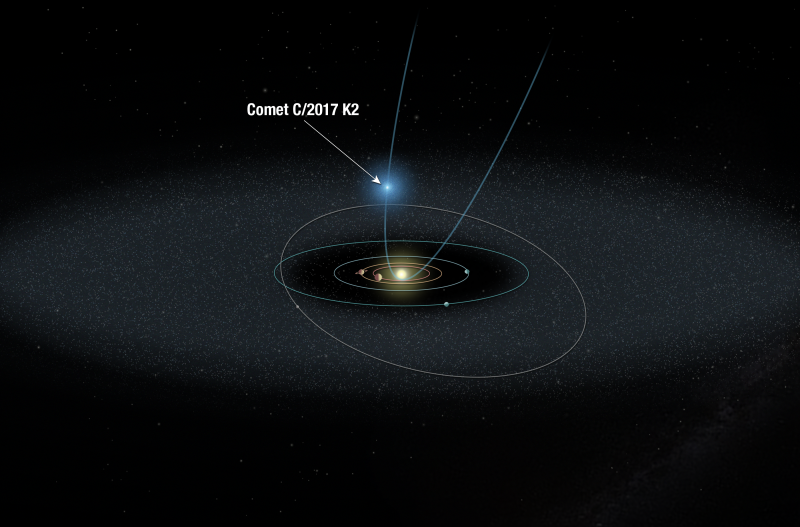 View larger. | View larger. | Schematic of Comet C/2017 K2’s approach to the inner solar system. K2 has been traveling toward the sun for millions of years from its home in the Oort Cloud at the edge of our solar system. The graphic shows the comet in its inbound journey, high above the plane of the major planets’ orbits. Image via HubbleSite.