This dazzling region of newly-forming stars in the Large Magellanic Cloud was captured by ESO’s Very Large Telescope.

A star-forming region of the Large Magellanic Cloud glows in striking colors in this image captured by ESO’s Very Large Telescope (VLT). The region, known as LHA 120-N 180B — N180 B for short — is a type of nebula known as an H II region (pronounced H two), and is a fertile source of new stars.

The Large Magellanic Cloud is a satellite galaxy of our Milky Way galaxy, visible mainly from the Southern Hemisphere. At only around 160,000 light-years away from the Earth, it is practically on our doorstep. As well as being close to home, the Large Magellanic Cloud’s single spiral arm appears nearly face-on, allowing us to inspect regions such as N180 B with ease.

H II regions are interstellar clouds of ionized hydrogen — the bare nuclei of hydrogen atoms. These regions are stellar nurseries where new stars form. And the newly formed massive stars are responsible for the ionization of the surrounding gas, which makes for a spectacular sight. N180 B’s distinctive shape is made up of a gargantuan bubble of ionized hydrogen surrounded by four smaller bubbles. 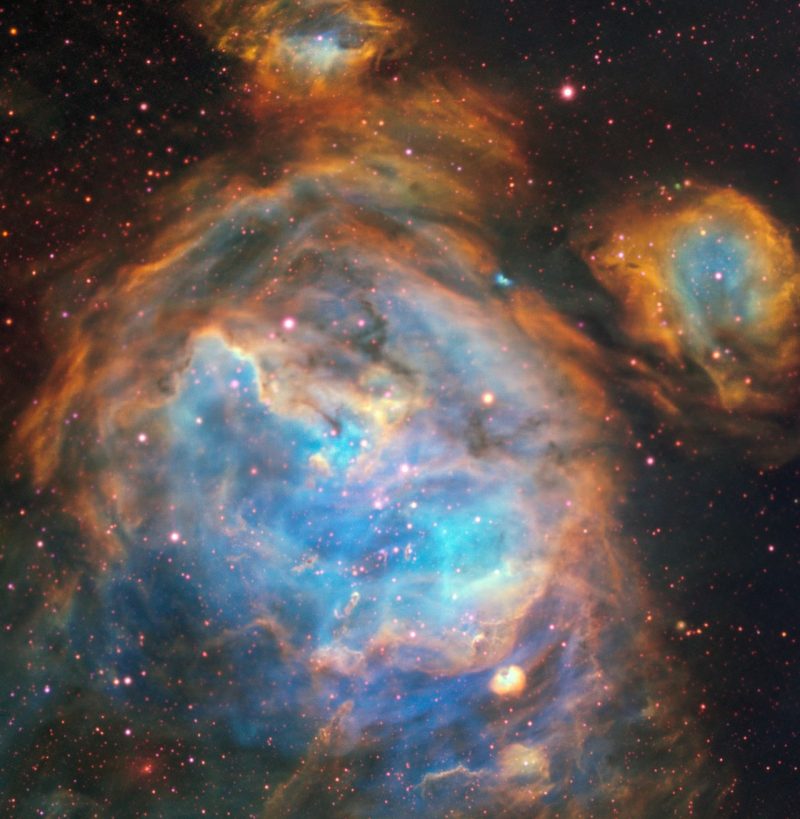 This dazzling region of newly-forming stars in the Large Magellanic Cloud was captured by the ESO’s Very Large Telescope. Image via ESO.

Deep within the glowing cloud of the HII region LHA 120-N 180B, MUSE has spotted a jet emitted by a fledgling star — a massive young stellar object – a star in its early stage of evolution. This is the first time such a jet has been observed in visible light outside the Milky Way. Usually, such jets are obscured by their dusty surroundings, meaning they can only be detected at infrared or radio wavelengths by telescopes such as ALMA. However, the relatively dust-free environment of the Large Magellanic Cloud allowed this jet — nicknamed HH 1177 — to be observed at visible wavelengths. At nearly 33 light-years in length, it is one of the longest such jets ever observed.

HH 1177 tells us about the early lives of stars. The beam is highly collimated; that is, it barely spreads out as it travels. Jets like this are associated with the accretion discs of their star, and can shed light on how fledgling stars gather matter. Astronomers have found that both high- and low-mass stars launch collimated jets like HH 1177 via similar mechanisms — hinting that massive stars can form in the same way as their low-mass counterparts. 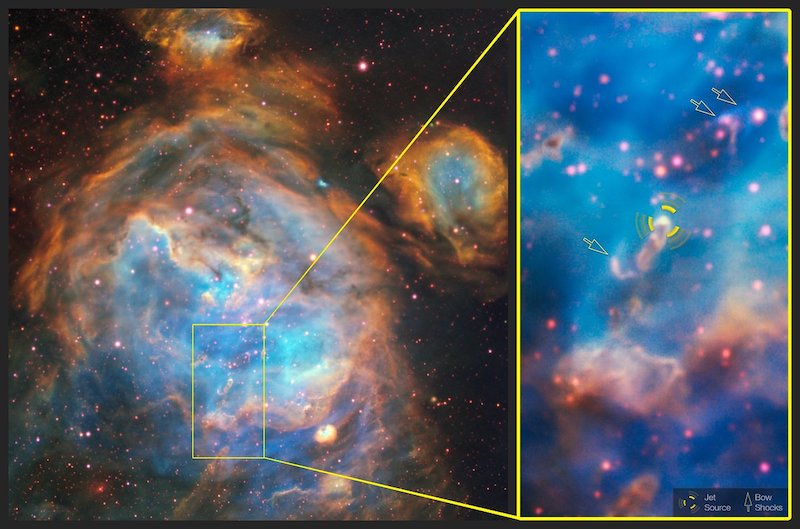 This image shows a close-up of the HH 1177 jet source and the bow shocks formed by the jet interacting with surrounding gas. Image via ESO.

This research was published January 24, 2019, in the peer-reviewed journal Nature.

Source: An optical parsec-scale jet from a massive young star in the Large Magellanic Cloud