Using data from both Spitzer and ground-based telescopes, scientists have been able to measure the speed of winds on a brown dwarf for the first time ever. 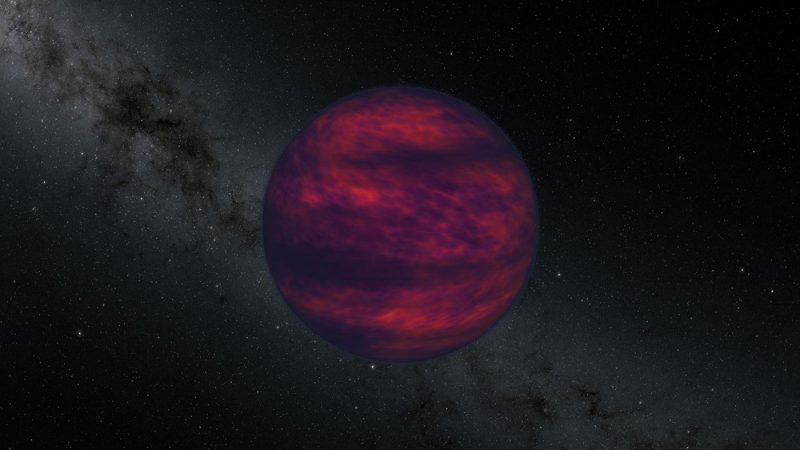 Artist’s concept of a brown dwarf. For the first time, scientists have measured the wind speed on one of these enigmatic objects that are halfway between planets and stars. Image via NASA/ JPL-Caltech.

Brown dwarfs are strange worlds, too large to be considered planets, but too small to be stars. Like many larger planets, however, brown dwarfs have thick, deep atmospheres and strong winds, and now scientists have directly measured the speed of the wind on a brown dwarf for the first time.

The findings were published in a peer-reviewed paper in the journal Science on April 10, 2020.

The brown dwarf used in the study, called 2MASS J10475385+2124234, is 32 light-years away from Earth. It is approximately the same size as Jupiter, but about 40 times more massive. This is the first time that infrared and radio observations had been combined to measure winds on a brown dwarf. Katelyn Allers of Bucknell University, who led the study, said in a statement:

When we realized this, we were surprised that no one else had already done it. 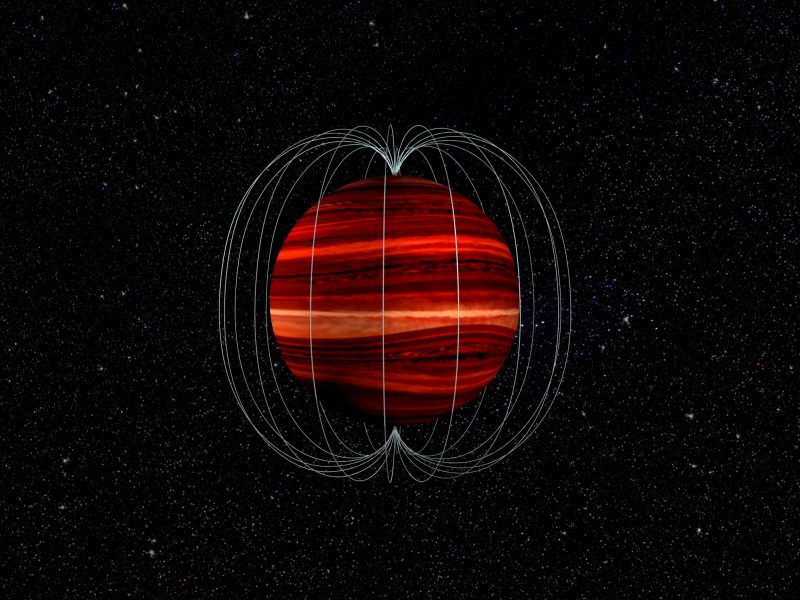 Artist’s concept of the magnetic field of a brown dwarf. The magnetic field, rooted deep in its interior, rotates at a different rate than the top of the atmosphere. That difference allows scientists to determine the wind speed. Image via Bill Saxton/ NRAO/ AUI/ NSF. 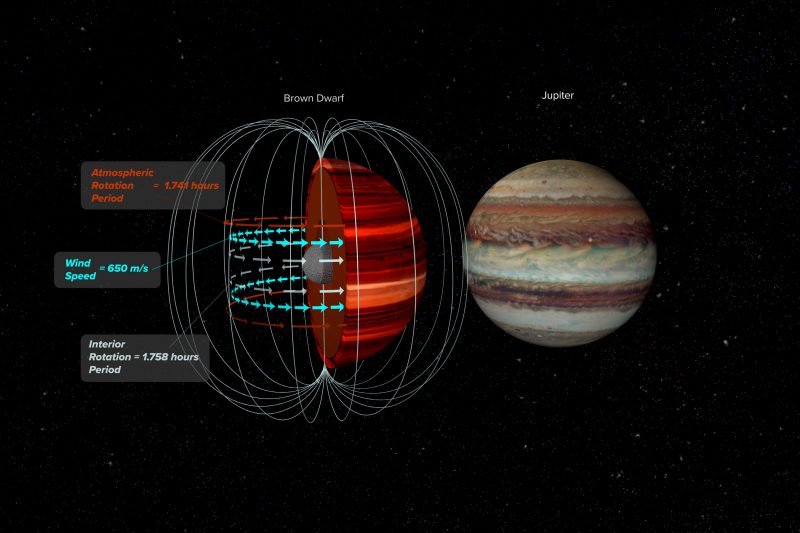 Comparison of a brown dwarf with Jupiter. The wind speed is determined by comparing the atmospheric rotation period with that of the brown dwarf’s interior. Image via Bill Saxton/ NRAO/ AUI/ NSF.

The idea for using both infrared and radio to study the brown dwarf came from observations of Jupiter, where scientists had noted that the calculated rotation speed of Jupiter differed between the two different kinds of methods. Allers said:

But why the difference? The radio emissions are caused by electrons interacting with Jupiter’s magnetic field, which is rooted deep inside the planet. The infrared emissions, however, come from the top of the atmosphere. Since Jupiter’s atmosphere is rotating faster than the interior of the planet itself, there is a mismatch in the two different kinds of observations. Could observing the brown dwarf in a similar manner help to determine its wind speeds? According to Johanna Vos at the American Museum of Natural History:

Because we expect the same mechanisms to be at work in the brown dwarf, we decided to measure its rotation speeds with both radio and infrared telescopes. 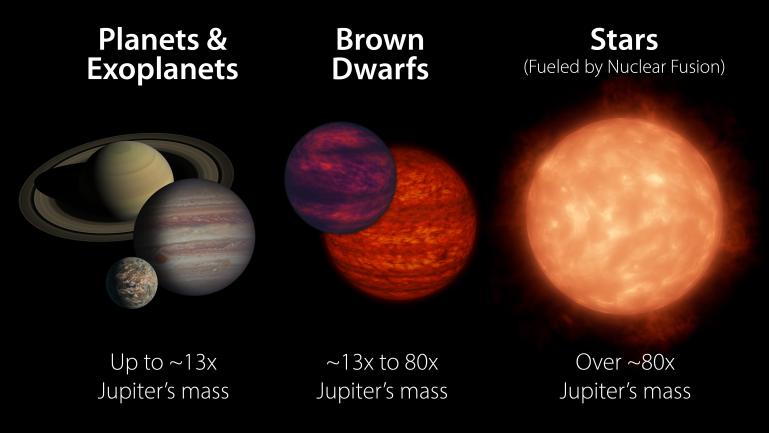 Comparison of planets in our solar system, exoplanets, brown dwarfs and stars. Image via NASA/ JPL-Caltech.

The brown dwarf’s infrared brightness was found to vary quite a bit, based on observations by Spitzer in 2017 and 2018. Subsequent radio observations by the VLA in 2018 were used to measure the rotation of the interior of the brown dwarf. Just as with Jupiter, there was a significant difference. The researchers found that the brown dwarf’s atmosphere is rotating faster than its interior, at about 1,425 mph. Jupiter’s wind speed, by comparison, is only about 230 mph (547 kph). Allers said:

This agrees with theory and simulations that predict higher wind speeds in brown dwarfs.

On Earth, wind speeds are also measured by comparing the motion of the atmosphere to the planet’s solid surface. It’s a bit different for brown dwarfs, however, which are composed almost entirely of gas. Deep inside a brown dwarf, the intense pressures cause the gases to behave more like a solid ball. The outer atmospheric gases, however, can still move independently.

2MASS J10475385+2124234 was well-suited for this study since it has an atmospheric temperature of over 1,100 degrees Fahrenheit (600 degrees Celsius). This means it radiates a lot of infrared light that Spitzer could measure. Like other brown dwarfs, it also has a strong magnetic field, ideal for analysis by the VLA.

Brown dwarfs are not the only objects that this technique could be applied to. It could also be used for exoplanets – planets orbiting other stars – that have atmospheres. Peter Williams, of the Center for Astrophysics, Harvard & Smithsonian, said:

Because the magnetic fields of giant exoplanets are weaker than those of brown dwarfs, the radio measurements will need to be done at lower frequencies than those used for 2MASS J10475385+2124234.

We’re excited that our method can now be used to help us better understand the atmospheric dynamics of brown dwarfs and extrasolar planets. 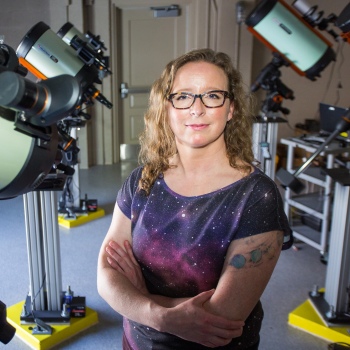 Spitzer had previously inferred the presence of winds on some exoplanets and brown dwarfs by measuring variations in the brightness of their atmospheres in infrared light. In 2015, the European Southern Observatory’s (ESO’s) La Silla telescope in Chile measured the speed of wind on a hot Jupiter exoplanet. Those winds were an incredible 5,400 mph (8,690 kph), 20 times faster than any ever recorded on Earth. But this new research could now help scientists measure winds on many more exoplanets, as well. Allers said:

We think this technique could be really valuable to providing insight into the dynamics of exoplanet atmospheres. What’s really exciting is being able to learn about how the chemistry, the atmospheric dynamics and the environment around an object are interconnected, and the prospect of getting a really comprehensive view into these worlds.

The new technique used to measure winds on this first brown dwarf will now make it possible to find out how fast winds blow on many others, as well. And, perhaps even more exciting, help scientists learn more about wind and weather on planetary worlds orbiting distant stars.

Bottom line: For the first time, scientists have been able to measure the speed of winds on a brown dwarf.

Source: A measurement of the wind speed on a brown dwarf