For the first time, astronomers have found a spectacularly long jet – nearly a light-year long – from a brown dwarf. 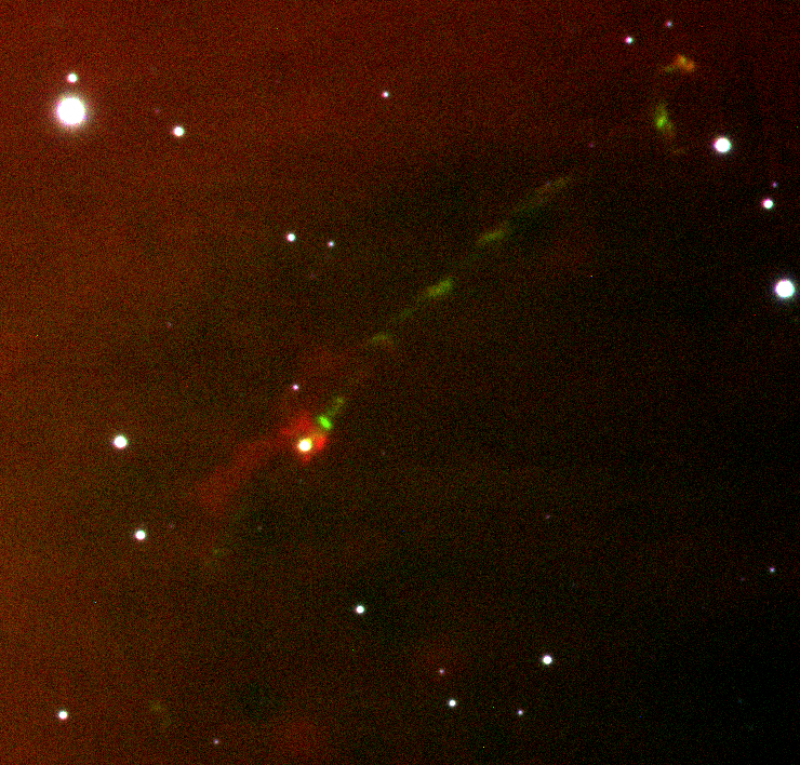 Astronomers used the SOAR telescope at the Cerro Tololo Inter-American Observatory in Chile to discover this jet from a brown dwarf. Image via NOAO.

It’s not uncommon for objects in space to have jets, but who knew brown dwarfs would have them? That’s because jets tend to be indicative of high-energy or very dynamic processes; so, for example, supermassive black holes in distant galaxies sometimes have jets, as do Gamma ray bursters, X-ray binaries and cataclysmic variable stars. Often, young stars have jets. But brown dwarfs? If you thought of brown dwarfs at all, you might have thought of them as relatively un-dynamic objects, not massive enough to create fusion reactions in their cores and so shine as stars do, but too massive to be categorized as planets. And yet now – for the first time – astronomers have reported a spectacular extended jet from a young brown dwarf.

The brown dwarf is known as Mayrit 1701117. It’s located the outer periphery of the 3-million-year-old Sigma Orionis star cluster, over 1,000 light-years away. The jet itself – launched by the brown dwarf – has been labeled HH 1165. Like the jets found associated with some young stars, the brown dwarf jet extends out a significant fraction of a light-year.

Young brown dwarfs have been known to have “outflows” before, but nothing on this scale. The earlier detections are being described as “microjets,” 10 times smaller in extent than HH1165. That’s why, in part, these astronomers are saying that this work supports an emerging picture of brown dwarfs forming similarly to stars. Astronomer Basmah Riaz, who led the study, said:

Our result shows that brown dwarfs can launch parsec-scale jets similar to those from young stars [Editor’s Note: a parsec is equal to about 3.26 light years].

The discovery has been accepted for publication in the peer-reviewed Astrophysical Journal. A preprint of the paper can be found on arXiv.org.

The image at top shows the jet launched by the brown dwarf. It was traced by emission from singly ionized sulfur, which appears green in the image. The length of the jet is 0.7 light years (equivalent to 0.2 parsecs). Knots along the jet reveal that the mass loss from the brown dwarf – which goes into making the jet – varies over time.

And so those knots, to astronomers, are very significant. Their statement explained:

Bottom line: For the first time, astronomers have found a spectacularly long jet – nearly a light-year long – from a brown dwarf.