People in the U.S. Northeast and Canada began reporting a bright daytime meteor on the afternoon of May 4, 2014. Photos and some dashcam videos here.

Observant sky watchers in Ontario, Canada and the U.S. Northeast spotted what appeared to be a bright daytime meteor – what astronomers call a fireball – in the sky on the afternoon of May 4, 2014. Sightings of the fireball centered on 4:16 p.m. EDT on Sunday. Witnesses reported a blue light and a loud boom. According to the American Meteor Society (AMS), the meteor had “a brightness rivaling the sun.”

… a sonic boom blast/explosion felt, and some people in Peterborough reporting their houses shaking — we felt it, too.

The American Meteor Society has given the meteor its own event page.

Daniel Fischer on Twitter (@cosmos4u) has been providing a lot of information about the May 4 meteor.

In the video below, the meteor is caught on a car dashcam. Look for it to drop vertically at about 00:22 seconds.

I had to watch this next video twice before I saw meteor, coming in vertically, almost dead center on the screen, falling from the top of the screen at about 00:26 seconds. 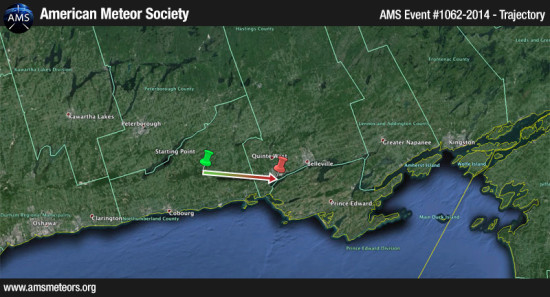 View larger. | This is a map of the estimated trajectory of the May 4 fireball, based on the witness reports submitted so far to the American Meteor Society. Reports continue to flow into the AMS fireball database. Report a fireball here.

Peter Dawson, an astronomer and professor of physics at Trent University, told cnews.canoe.ca that the object was “quite likely” a small meteoroid – a chunk of space debris – exploding high in the atmosphere. CNews reported:

“Small” in this case means it probably measures anywhere from half-a-meter to a meter, Dawson said, and exploded with the force of 50 tonnes of TNT [ed note: 50 metric tonnes equals approximately 55 short tons].

That’s small as compared to the meteor that exploded over Russia in February 2013, he said.

That one blasted out windows and injured 1,000 people in the Russian city of Chelyabinsk. It exploded with the force of 500,000 tonnes of TNT, Dawson said. 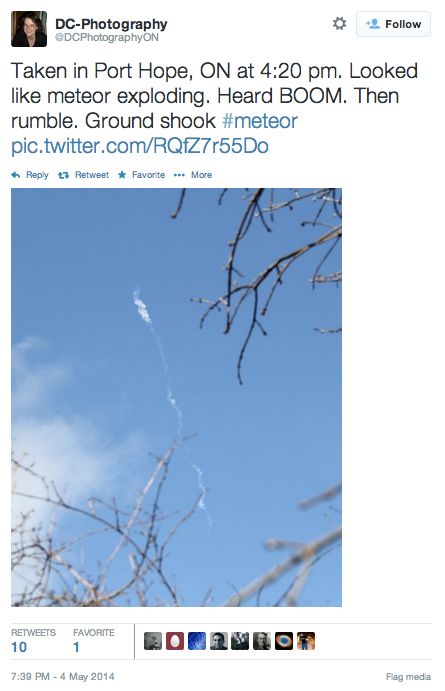 The American Meteor Society said that Sunday’s fireball over Ontario marked the third significant fireball of this past weekend, following a relative slow season for fireballs so far this year. They wrote:

A large fireball with numerous sonic booms fell over Arkansas on Friday night. Another bright fireball was seen over North Carolina Saturday night and this daytime fireball over Ontario marks the third significant event for this weekend.

There is no evidence of a connection between these bright fireballs and the ongoing Eta Aquarid meteor shower. Meteors in annual shower result from Earth’s intersection with the orbits of comets. Each piece of cometary debris that burns up in our atmosphere to produce a meteor shower tends to be smaller than a grain of sand. These fireballs, on the other hand, are most often produced by rocky or metallic asteroidal material. The chunk of debris entering our atmosphere to produce a bright fireball would start out much larger than the sand-sized Eta Aquarid meteors. As astronomer Peter Dawson stated above, the original chunk of space debris causing Sunday’s fireball might have been a meter (yard) or so across.

We in astronomy used to say that you might see one exceedingly bright meteor – bright enough to be visible in daylight – in your lifetime. And perhaps that is true. However, the advent of Internet communications has caused everyone to realize that very bright meteors are common events, given Earth as a whole.

In fact, a few weeks ago, the Nuclear Test Ban Treaty Organization – which operates a network of sensors that monitors Earth around the clock listening for the infrasound signature of nuclear detonations – released a data set that surprised everyone, including astronomers. It caused scientists to become aware that there have been some 26 atom-bomb-sized explosions in Earth’s atmosphere since the year 2000, caused by incoming asteroidal material.

Did you see it? Report it to the American Meteor Society.

Bottom line: People in the U.S. Northeast and Canada began reporting a bright daytime meteor on the afternoon of May 4, 2014. Photos and dashcam videos here.